Should Griffin Woods be spared “development”? 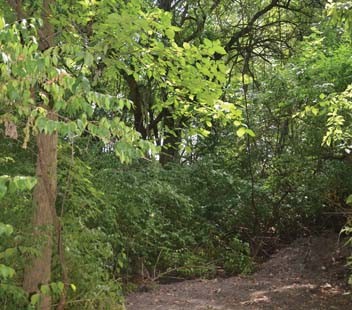 PHOTO BY GINNY LEE
Few of our readers know the words and music to “Woodman, Spare that Tree,” a mawkish ballad that was a hit in the 1830s. Instead they are singing the blues about the destruction of Griffin Woods. The Springfield City Council recently decided that those 20 acres of trees at Washington and North Bruns Lane may be replaced with a parking lot anchored by a new Schnucks supermarket. Petitions are being passed, letters written to editors and – imagine! – citizens attending park board meetings in the hopes that someone, somehow will save the woods from asphaltification.

Ward 8 Ald. Kris Theilen has said he understands people’s attachment to the woods, but the woods were never set aside to be a nature preserve. No, they weren’t, but it should be noted that the woods were never set aside for commercial use either. This once-sylvan intersection – yes, children, there really were fair hills at this spot within living memory – is now barren asphalt dotted by buildings standing in forlorn isolation. Advocates of the Schnucks rezoning argued that there is no point in keeping the woods when everything around them is paved. Thus do yesterday’s bad land use decisions make for worse land use decisions today.

A wiser city would encourage tree planting and landscaping, add green space and parks and minimize the negative impact of the city government on the environment. If those sentiments sound familiar, it is because they are taken almost word for word from the City of Springfield Environmental Policy Statement. Adopted during the Davlin regime, the statement commits the city government to “the ideals and practices of environmental responsibility.”

Perhaps you’ve read it. Very few aldermen seem to have done so. If they had, they might ask some questions that need to be asked. Having destroyed the woods, will Schnucks have to make good the loss in part by meeting tougher than usual parking lot landscaping requirements? Shouldn’t developers of all greenfield sites be required to compensate the public for loss of green space by donating money equal to the value of the land to acquire and manage similar lands elsewhere in the city?

Some concerned citizens have importuned the Springfield Park District to rescue the woods and spare the aldermen the challenge of actually implementing the city’s own good green policy. The SPD was founded as the Springfield Park and Pleasure Driveway District, and its brief is as much aesthetic as recreational. Certainly green spaces as well as parks are crucial (to rephrase the city’s environmental policy statement) to minimize the negative impact of the city’s environment on its people that results from economic development.

Back in May, however, while the developer was oiling up the chainsaws, park board president Leslie Sgro told our Patrick Yeagle that park board members “have to consider the economic development of the city” before they decide what do. (See “Park district mulling Griffin Woods purchase,” May 31, 2012.) I would have thought that someone who ran the park board would give parks absolute priority and leave economic development to the city’s Office of Planning and Economic Development, the Greater Springfield Chamber of Commerce, Downtown Springfield, Inc. and the many programs of the Illinois Department of Commerce and Economic Opportunity. President Sgro would seem to believe she has a job other than the one she has.

Speaking to IT, the company’s spokeswoman said that those opposing the new Schnucks should be reassured by Schnucks’ record of building environmentally friendly stores, adding, “Our developer is working on plans to harvest the trees should we get to that point, but we’ll only remove those trees that are necessary.” Meaning that if the company decides that all trees must go, all trees will go.

The Schnucks spokesperson added, “We would hope our reputation as a strong community partner and responsible builder would reassure [people unhappy with the project].” I can only add my voice to those that have already suggested that if Schnucks wishes to persuade city residents that it is indeed a strong community partner it will build its environmentally friendly store somewhere else in town. The firm might also consider donating a little of the Springfield money it will haul back to St. Louis to pay for the restoration of Griffin Woods.

“Development,” as distinct from simple building, could be defined as the application of knowledge and labor to put into order a jumble of materials – wire, bricks, gravel, concrete powder, sticks of milled wood – in such a way that the result returns value to the community. Applying knowledge and labor to put into ecological order a jumble of plants (by, say, ridding a woods of invasive plants) also returns value to the community. This, however, is apparently the one kind of development that even Springfield won’t abide.