The show can't go on yet 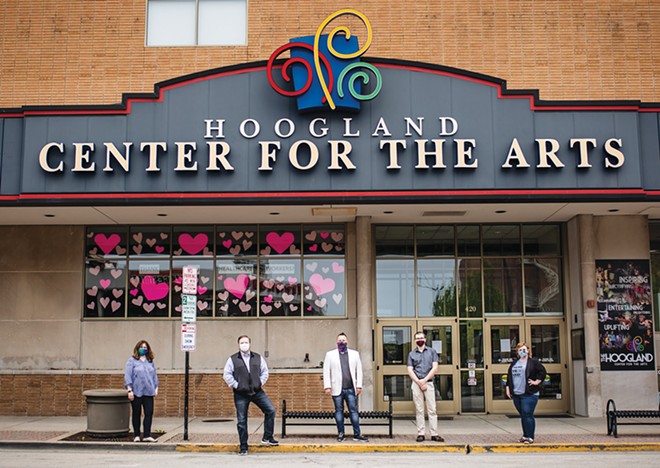 Gus Gordon is surrounded by 80,000 square feet of mostly empty space as he begins to work out of the Hoogland Center for the Arts more in the coming days. The Springfield organization's head had been largely working from home, as had other staff. But the time has come to sift through the papers and other matters left behind when the world drastically and swiftly changed as a result of the pandemic.

"This is going to be tough. I'm very optimistic that we will be fine. But it just depends on how long this thing lasts," said Gordon. As more businesses begin to re-open their doors, theaters aren't so lucky. The communal aspect – the big crowds in close seating and tight quarters backstage – make social distance especially tricky. The governor's plan for reopening has five phases. Springfield recently entered the third. "We really can't start doing anything until phase four. That's when groups of 50 or under are allowed. And we might have a little more activity in the building at that time," said Gus. Even then, he's not sure just what that activity might look like. It won't be until the final phase that things can get back to full swing.

Gordon estimates that Hoogland has lost $200,000 in revenue since closing its doors in March. Multiple performances were canceled or postponed. The center largely makes its money on ticket sales, rentals and classes, all of which have been off the table. Resident artists and others who rent office space are allowed to begin working out of the building again now. But the organization is largely relying on the help of donors. Hoogland also received a Payroll Protection Program grant through the federal government. Gordon said there were 18 staff altogether, but at the end of May he had to let go part-timers, at least for now. "This was one of the hardest things I've ever had to deal with."

Though "money is dwindling in our savings account," Gordon said he harbors hope there will be days of rehiring and crowds enjoying art together. Prior to the pandemic, most of the large downtown building was being utilized, not just for theater, but also for lectures, concerts, weddings, summer camps, an art gallery and more. The logistics of getting crowds back in the building have yet to be determined. Ensuring safety is a top priority and there are talks of sanitization systems and other ways to prevent the spread of infection. "I do know that this too shall pass," said Gordon. "The support that I'm seeing says to me that things will even be stronger after than they were before."

Into the Woods was one of the Hoogland productions that was canceled as a result of the pandemic. The musical tells the story of what happens to classic fairy tale characters after "happily ever after." Turns out, those characters have a lot of trauma to heal from. In a tune from the Stephen Sondheim production, Cinderella sings a song called "No One is Alone."

That song, performed by cast members of the Hoogland's production, is featured in a new webseries sponsored by Hoogland and Memorial Health System. The series of short videos, which will be regularly released throughout the year, partner artistic expression with mental health advice and resources. Leigh Steiner, who hosts the series, has a foot in both worlds. She's president of the Hoogland board of trustees and also serves on the Memorial Behavioral Health board of directors.

"The healing properties of creativity and creating art have been known for centuries," said Steiner. Diana Knaebe, system administrator for Memorial Behavioral Health, appears with Steiner in the episodes to offer mental health input. They are joined, virtually, by various artists of all stripes. Steiner said the goal is to create an accessible library viewers can access at their convenience to "feel uplifted and also get tips for wellness."

One episode's theme is resilience, something everyone making it through these challenging times could stand to contemplate. Said Steiner, "Each of us can experience and identify with the arts and what it does for us in terms of our wellness."

You can find the series "Seize the Day," a production of Hoogland Center for the Arts and Memorial Health system on YouTube, at: tinyurl.com/ydyc78l2