The role of religion in politics 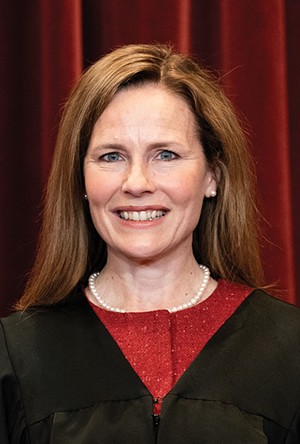 Credit: Erin Schaff/Pool/Getty Images/TNS
Amy Coney Barrett is the newest Supreme Court justice, and many people are wondering how her Catholic faith will impact her views on cases related to abortion.

As the U.S. Supreme Court ponders whether to overturn Roe v. Wade, all eyes are on Justice Amy Coney Barrett – and her religious beliefs.

It's one of the dumbest arguments I've heard from a law professor in a long time.

Judges aren't interchangeable cogs in a machine called justice. Each views the law through the lens of their own life experiences, knowledge and philosophy.

Personally, I always admired the late U.S. Sen. Paul Simon's approach. The Lutheran minister's son rarely talked publicly about his personal faith, but he lived it.

I remember talking to him years ago when he mentioned having visited former Chicago Alderman Thomas Keane in a federal prison in Kentucky. Keane was there after being convicted of 17 counts of mail fraud and one count of conspiracy in secret land deals.

Newspapers criticized Simon for associating with a convicted felon. But Simon did it because he believed Jesus commanded his followers to visit those in prison.

The senator told me he met so many other former Illinois politicians during that penitentiary visit that it "felt like old home week."

His approach to faith was void of any sanctimony. But it certainly affected how he conducted himself as a senator. You could also see it in his own personal integrity and how he chose to treat others.

I pressed him once about whether those in public office must ever set religious positions aside to govern others. He said they do. He noted that if they didn't, a Catholic judge could never preside over a divorce case, as Catholic dogma does not allow for divorce.

In the case of Barrett, law professors have pointed to a law journal article she wrote as a young lawyer about Catholic judges and the death penalty.

In the article, Barrett noted that judges are "obliged by oath, professional commitment, and the demands of citizenship to enforce the death penalty," but they are also "obliged to adhere to their church's teaching on moral matters." They are therefore "morally precluded from enforcing the death penalty."

What's a Catholic judge to do, then? According to Barrett's article, the judge must recuse herself. She can neither enforce the death penalty and violate her religious conscience, nor fail to enforce it and violate her oath of office.

What does all this have to do with abortion? Barrett tells us in the same article that in the context of abortion, the case for a Catholic judge's recusal is even stronger. Unlike the death penalty, the Catholic church's "prohibitions against abortion and euthanasia are absolute."

On the current abortion case before the court, professor Sherry says Barrett should recuse herself "if she has any integrity at all."

The scribes and pharisees would be hard-pressed to produce the level of sanctimony of an outraged American law professor.

It's not particularly surprising that Barrett's views on recusal as a 49-year-old Supreme Court justice are different than when she was a young law clerk. It's also worth noting that when an appellate judge chooses not to vote she is still impacting the case by denying her vote to one side or the other. So, in effect, it's not really a neutral stand.

In our democracy, there is a constant balancing between the clauses of the Constitution that prohibit the establishment of religion and those that guarantee the free exercise of it.

Some religious conservatives have bought into the false notion that our Founding Fathers intended for the United States to be a Christian state. That's a myth. Some of our founders, like Benjamin Franklin and Thomas Paine, did not identify as Christians. In fact, Paine called Christianity a "fable." Thomas Jefferson used his razor to slice passages out of his Bible that he didn't agree with. That's hardly a conventional approach to scripture.

On the other hand, some secular liberals contend it was the intent of the drafters of the Constitution that matters of faith should in no way inform those governing the nation. This ignores the deep religious beliefs of men like Patrick Henry and Samuel Adams.

So, the tension between the religious and the secular dates back to the beginning of the republic and the Supreme Court itself. John Jay, our nation's first chief justice, was president of the American Bible Society.

What did he say of the role of religion and the judiciary? "Real Christians will abstain from violating the rights of others."