A review of Benjamin E. Park's Kingdom of Nauvoo 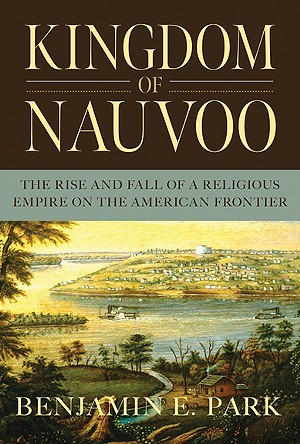 Kingdom of Nauvoo: The Rise and Fall of a Religious Empire on the American Frontier, by Benjamin E. Park (Liveright, 2020).

Prophets who offer a path to peace in this world and redemption in the next have never been rare in the U.S. They were never less rare than in the 1830s and 40s. The direction and pace of social change left many people uneasy in this world and yearning to find a better one with God. One of the men who promised to show them the way was Joseph Smith, self-styled prophet of the Mormons.

The Saints, as they called themselves, bought a town site on the Mississippi river in Hancock County in 1839, there to build a new Zion, a place Smith dubbed Nauvoo. The gathering at Nauvoo of Saints from two corners of the earth –the U.S. and Britain – resulted in a community of some 12,000 that was rivaled in size in Illinois only by Chicago. That growth, and the social, political and religious opposition it inspired from its Illinois neighbors, rattled the foundations of the young state of Illinois. Nauvoo's rise and fall is recounted in a new book, Kingdom of Nauvoo: The Rise and Fall of a Religious Empire on the American Frontier, by historian Benjamin E. Park, which was published to enthusiastic reviews earlier this year.

The events themselves have long been familiar in broad outline. Joseph Smith conceived not merely a new Christian church but a new religion. Believers founded a settlement in Ohio and another, beginning in 1831, in northwest Missouri, but trouble followed the Saints wherever they went, much of which they caused themselves. They voted as the prophet instructed, and thus upset often delicate local political balances. They engaged in dubious busines practices, and their peculiar take on Christianity alarmed the pious.

Disputes between Mormons in Missouri and their neighbors fed a fever of hate that resulted in the murder of 17 Saints by vigilantes. The governor declared the Mormons enemies of the state in 1839. Fleeing Missouri, Smith's believers gathered in the town of Commerce across the Mississippi in Hancock County.

Even at the time, it would have taken a hopefulness bordering on delusion to think that the Mormons' new refuge in Illinois would be their last, but so it seemed for a while. Hastily built, the houses at first weren't much more than shacks, but in a few years the merchant elites were able to build handsome brick homes. At the center of the town in every way stood a 165-foot-tall temple for the performance of the secret rites central to Mormonism, such as the baptism of the dead into the faith.

With new converts piling into Nauvoo, the Mormons had become numerous enough to dominate local elections. Politically, the Saints marched in unison, voting en masse at Smith's direction for whichever party or faction promised them protection – usually Democrats, who were then roughly the equivalent of today's Trumpish Republicans. For their support, the General Assembly granted Nauvoo an extraordinary municipal charter which gave the town its own laws and its own courts. Nauvoo even had its own army; at its peak, this city militia, the so-called Nauvoo Legion, had boasted artillery and 1,500 men under arms, making it by far the largest such force in the state. Thus was established a unique city-state within the Illinois commonwealth.

The Saints might have seen themselves as a godly movement, but Gentiles saw the church as a subversive political program, and on that basis opposed it. As for the Nauvoo Legion, the Mormons had an army to protect them from the Gentiles, as they referred to their non-Mormon neighbors, but the Gentiles, reliant on feeble institutions of the still-young state of Illinois, had no organized force at hand to protect them against the Mormons. Any reader old enough to recall the 1960s and the Black Muslims' Fruit of Islam – well-drilled units schooled in the use of firearms – knows the hysteria that can be excited by such pantomime soldiers.

The Saints not only subverted cherished political and legal systems, they subverted moral systems too, by the practice of polygamy. Park notes that no single aspect of the Mormon program troubled locals more than plural marriage. Murder was in the air – again. Vandalism and arson spread and scattered skirmishes with armed neighbors hinted at the possibility of civil insurrection in the western counties.

Tensions reached a head in 1844. Smith ordered the destruction of the printing press of an opposition newspaper, which led to arrest warrants for rioting that were dismissed by his courts. He declared martial law, which led to charges of treason against the state of Illinois. While he was awaiting trial in the jail in Carthage, a mob attacked the building and murdered Smith and his brother. In May 1845, five men were tried for the Smith brothers' murders. The jury concluded that the five men could not be convicted for merely fulfilling the wishes of an entire community. "Sometimes the voice of the people," notes Park, "transcended the laws of the land."

The revocation of the city charter by the General Assembly and the disbanding of the Nauvoo Legion left the town vulnerable to raids during the summer of 1845; soon the situation became untenable. Flight seemed the only option, although no one knew quite where to, except that it would be – as always in the U.S. – out west. Most of the Saints left Nauvoo under the protection of state militia for their eventual new home in the Utah territory beginning in February 1846. Park uses the word "emigrated," but "fled" is more accurate.

Park, who teaches history at Sam Houston State University in Huntsville, Texas, does not delve into the mysteries of Mormon theology, nor does he attempt a biography of Joseph Smith. He treats the prophet only to the extent his legal troubles, his political ambitions (Smith ran for president in 1844), his secret adoption of plural marriage, his often shaky judgment in colleagues and advocates determines the fate of the town.

Park's book is based in substantial part on recently released minutes of meetings of Nauvoo's governing elders that had been locked away for 172 years in the archives of the Utah church. Civic and churchly realms were mingled in old Nauvoo, and the minutes make clearer the evolution of polygamy among early church leaders, a topic that been disputed for decades by believers.

Casey Cep, writing in The New Yorker in March, insists that Park's treatment of Smith's "sometimes contradictory political theology . . . elevates Kingdom of Nauvoo from pure religious history to the realm of political theory." If by "political theology" we mean a considered body of doctrine regarding the proper relation of his church to secular power, there was none. Smith was reacting to the successive political dilemmas raised by the Mormons' aggressive efforts to carve for themselves a safe haven in western Illinois by resort to tactical voting – using democracy to protect themselves from democracy.

If the Mormons decried the Gentiles' failure to apply the law to protect the Mormons, the Gentiles feared the Mormons' misuse of the law to protect themselves. Park sums up Gentile opinion. "Politicians refused to take any action that would cost them the Nauvoo vote," he writes, "legislatures refused to set a precedent by repealing the Nauvoo Charter, and judges refused to risk tensions by overturning Nauvoo rulings. Democracy, in other words, had proven too easily manipulated. The result was a religious tyrant."

Park draws no clear lines connecting Mormon Nauvoo to current events, but he returns again and again to the question, whether and to what extent and under which circumstances can a distinct people function as the members of the same polity? Readers are freer than the careful historian to examine the links between the events of the 1840s and the Gentiles and Mormons of today's Illinois. Just as the non-Mormons of Hancock County feared the city-state of Nauvoo, some residents of downstate counties fear the state of Illinois. Officers of the law in a few such places refuse to enforce gun laws or public health edicts that their neighbors find distasteful, complaining that the state thus overreaches its authority.

As their position grew more imperiled, the Saints' proposed solutions grew more radical. They resolved to offer an alternative to American democracy in the form of a theocratic kingdom that would achieve the stability and justice that the U.S. Constitution only promised. The Saints have been likened with reason to the Puritans, who also had been too good for their wicked neighbors; to build their own godly community, they had to seek land among the savages – their term – in America because no one in England could abide them.

One respected church member maintained that "only when societies were formed by like-minded citizens could democracy truly function." Park politely notes that the notion was contrary to mainstream American belief, which was to "to mix divergent groups together." In fact, forming communities of like-minded citizens is mainstream American belief. It is the American Dream distilled, the impulse behind the self-segregation of Americans in same-class towns and states. It explains why California is a very different society than, say, Alabama. The federal system permits just such segregation, indeed can be said to thrive on it, to the extent that the U.S. is a stronger nation for having both a California and an Alabama in it.

While less widely acknowledged, self-segregation also has always been crucial to keeping the social peace, it being an escape chute for embattled minorities who feel themselves oppressed by a majority whose values they find alien. One such is the constituency of the so-called Eastern bloc legislators, whose members are at odds with the Illinois majority, driven by Chicago, about abortion, guns and immigration. Their solution – calling on Congress to declare Chicago the 51st state, and thus expel Chicago from Illinois – would turn Downstate Illinois into Indiana. It will take more than a few barn burnings to drive Chicago out of the Commonwealth, however; it would be simpler for them to follow the example of the Saints and just pack up and move.

Park, to his credit, does not play to the cheap seats. He downplays the sensational and the lurid. Park's account of the events of those tumultuous years is as clear as a story can be that has dozens of characters. He writes with clarity and economy; the book is not a sentence longer than it needs to be. It is handsomely laid out and is marred only by a very poor index. If the book's title honors contemporary practice and employs a subtitle that exaggerates the significance of the work – the Mormon religious empire then existed only on the heads of Smith's followers – well, that is the publisher's doing.

James Krohe Jr. has written about Nauvoo previously for IT. See The melting pot boils again from 2012 and Nauvoo, City of Wine and Mormons from 1979. He is the author of Corn Kings & One-Horse Thieves: A Plain-Spoken History of Middle Illinois.