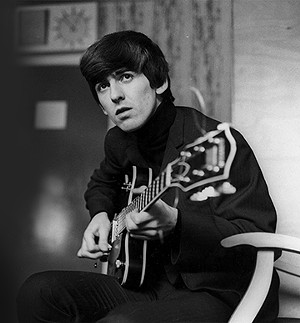 A youthful George Harrison.
“Whenever you say ‘Beatles’ – that’s the magic word,” said Springfield-based filmmaker and super-Beatle fan Robert Bartel. He would know. His 1999 documentary A Beatle in Benton, Illinois – which details a single fortnight visit to the southern Illinois town in 1963 by 20-year-old George Harrison in order to see his married sister – is not only a consistent seller nationwide but has bizarrely managed to win Bartel a best documentary “Oscar” statuette 19 years after the film’s initial release (a 240-minute, two-DVD version was released in 2016).

Harrison and his brother, Peter, arrived in Benton on Sept. 17, 1963. The Beatles were already superstars in England and across Europe but were still unknown in the United States. (“I Want to Hold Your Hand” would be released stateside and go straight to number one on the Billboard charts in January of 1964.) “Ringo was supposed to come with them but he backed out because he wanted to go with Paul to Paris,” said Bartel, matter-of-factly. “John was in Spain having his, uh, thing with [Beatles manager] Brian Epstein.”

George’s sister, Louise, had settled in Benton after marrying a Scotsman named Gordon Caldwell who, after stints in the Arctic Circle and in Peru, had found work in Franklin County as an engineer with Freeman Coal (now Freeman Energy), headquartered in Springfield. George, just 20 at the time, was nicknamed “that skinny little kid from England” by locals. Already wealthy from the success of the Fab Four in Europe, Harrison did his part to stimulate the southern Illinois economy during his visit, having arrived with scads of cash. He reportedly bought giant stacks of records from a Benton record store (including the original version of his future solo hit “I’ve Got My Mind Set on You”) as well as purchasing a Rickenbacker guitar (rare in the UK) from Red Fenton’s music store in Mt. Vernon. Harrison was also introduced to Gerald “Gabe” McCarty, leader and bass player of local rock ’n’ roll combo The Four Vests, and sat in with the band on some Chuck Berry tunes during a concert at the Benton VFW hall on Sept. 28, 1963. Soon after, The Four Vests learned the entire Please Please Me LP (still unreleased in America) from the copy Louise had received in the mail from her mother, making them the first Beatles cover band. On Sept. 28, Louise, George and Peter went to West Frankfort, where they persuaded the on-air DJ to make WFRX the first radio station in the United States to spin a Beatles record (“From Me To You”).

Bartel’s documentary began as an act of preservation. In 1994, he was working as a licensed private detective when a case took him to Benton by chance. “My wife, Janice, and I had seen Louise Harrison at BeatleFest in ’93 and ’94, talking about her time living in Benton,” Bartel said. “While I was working that case in town I looked up Gordon Caldwell in the phone directory for 1964, got the address and went over there.” Bartel was shocked to see a backhoe sitting against the back of the house. “I thought, what are they doing? They can’t tear this house down, the Beatle people will go nuts!” Bartel canvassed the neighborhood and learned that the Mines and Minerals department of the Illinois Department of Natural Resources had plans to use the space for a parking lot. “No way!” Bartel said, reliving his reaction. “I’m going to lay down in front of this backhoe – civil disobedience, whatever – they’re not going to tear down this house, I’ve got to get ahold of Louise and she’s going to fly in and save the day.”

Soon, Bartel rallied District 12 Senator Jim Ray, the Illinois governor’s office, Congressman Glenn Poshard and the mayor of Benton to his cause and halted the demolition plans. The house now operates as The Hard Day’s Night Bed and Breakfast. The publicity led to Danny Malkovich, who owned the Benton Evening News, contacting Bartel with the story of how he and his brother, future famed actor John Malkovich, met George and Peter Harrison on the Benton town square. The oddball story of the two future celebrities’ chance 1963 meeting soon went out on the Associated Press wire, resulting in what Bartel described as six months of international phone calls attempting to verify the anecdote.

As for the documentary itself, Bartel – who, along with his wife, has accumulated enough Beatles memorabilia over the years to run a museum out of his home – says the production was largely done on the spot. “I interviewed all the principal people and then went to the principal locations,” he said. “I was preserving Illinois history – and as a Beatle fan I wasn’t trying to ignore the fact that one of the most famous icons in the world came to a little hillbilly town in southern Illinois.” In 1999, the film won documentary awards at both the Berkeley film festival and the Brooklyn Film Institute

The 50th anniversary version of A Beatle in Benton, Illinois was released on DVD in 2016, which attracted the attention of a company called Red Carpet Concierge International, which holds an annual “regional Oscar” ceremony (not affiliated with the Academy of Motion Picture Arts and Sciences) on Feb. 24 in Chicago. Bartel, who had been nominated in the “best writer” category for a different project, was blindsided when his name was called to receive the award for best documentary. “It was at the JC Martini Club,” he recalled. “There were all kinds of Frenchies and Italians there, everybody’s kissin’ everybody and talking in foreign languages and I hear my name get called for best documentary. I almost lost my mind!”

Bartel’s involvement in a dangerous multi-car highway accident on the way back to Springfield after the ceremony – in the aftermath of which he and his “Oscar” statuette traveled together in an ambulance – did little to dampen his sense of pride and accomplishment. “It’s an Illinois story, it’s a Beatle story, it’s historical, and I connected the dots,” he said.