The politics of pretty

An election is just another beauty pageant 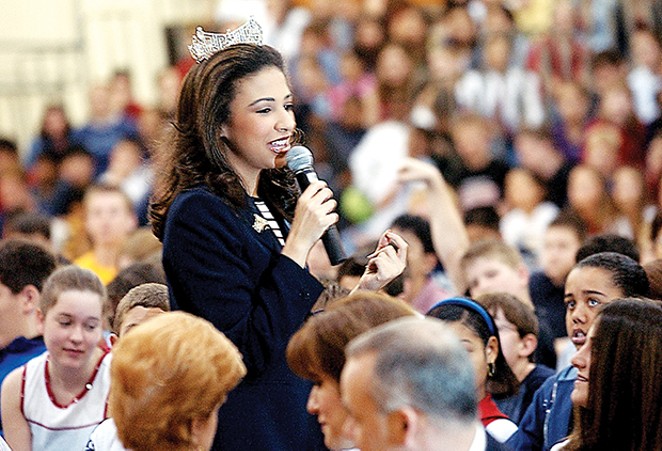 My favorite Miss America was Vonda Kay Van Dyke (1965), forever famous as the first  Queen of Atlantic City to use ventriloquism in the talent portion of the contest. She later wrote a series of Christian-themed teen advice books in which young women learned about how “that inner sparkle that only Christ can give” would make them more beautiful.

In the bubble in which I live, the Miss America pageant ceased to exist when Bert Parks did. I was surprised therefore to read that it is still held, and even more surprised to learn that some people consider being a Miss America something a woman ought to be proud of. Pretty (in a painted doll-like way) to look at, inoffensive in manner, able to say nothing charmingly, the contestants seemed to be auditioning as model dinner hostesses of the sort that the up-and-coming professional man dreams about marrying when he isn’t dreaming about schtupping his secretary on the conference room table.

So many things from the 1950s are back in vogue, from Jim Crow to isolationism to bad pop music. (We even have Nikita Khrushchev again, in the person of Kim Yong-un.) I guess I shouldn’t be surprised when Miss America is again offered as a model for American womanhood. I’m not sure even the Republicans, whose policies would take us back to the ’50s faster than the Delorean time machine from Back to the Future, can make a case that being a Miss Americas is a credential for being Illinois’ attorney general.

That job will be open come 2019, after Lisa Madigan announced she would not run for re-election. Already in the race was Republican Erika Harold, an attorney from Urbana who as Miss Illinois won the crown in 2003 and later condescended to attend Harvard, where she earned a J.D. She ran for Congress in 2014 and lost in the primary to Rodney Davis, the prettiest of the field.

After Madigan’s announcement, gleeful shouts of “chicken!” rang out from Republicans convinced that Madigan had fled from a fight against Harold. So silly an assertion tempted Sen. Kwame Raoul, the Democrat who now sits in Barack Obama’s old seat, to remark, “I think Lisa would have acquitted herself well against Miss America.” Raoul’s wisecrack was damned as dismissive, condescending and sexist. Lest the outrage of the Miss America bloc upset his own electoral ambitions, Raoul apologized for it a few days later.

Dismissive Raoul’s remark was intended to be, but not of women – of Miss Americas. In this I am behind him 100 percent. The contest is the quintessence of red-white-and-blue hokum (especially white). Imagine a World Wide Wrestling match as restaged by a panel of parsons’ wives. As for what is now called the “Lifestyle & Fitness” test, not even the entrants in the Westminster dog show are required to parade in swimsuits.

The pageant’s defenders insist that it judges much more than looks, which is true, but it is also true that no ugly woman will ever win, no matter her poise or presence. Nonetheless, State Rep. Jeanne Ives from Wheaton scolded him for trying to frame Harold as “just a pretty face.” No, he framed her, appropriately, as a pretty face who wanted to be a Miss America. The question I always hoped they would ask the finalists is, Why would a young women of your obvious intelligence and drive willingly expose herself in every way to being judged by the most trivial and fleeting of personal attributes?

Kwame Raoul was right about Miss Americas but mistaken in thinking that being a Miss America is not a preparation for politics. As Harold told the Chicago Tribune recently, there are “a lot of parallels” between being a pageant contestant and running against Lisa Madigan. A campaign is a never-ending interview phase of the Miss America pageant. Contestants must be able to answer painfully inane questions, invest platitudes with something like conviction and give no offense. There’s a reason, after all, why they call presidential primaries “beauty contests.”

Good looks are of particular value in politics now that candidates are packaged and sold as celebrities; they won’t guarantee a win, but they will win more votes than they would have otherwise, and in close races that will be enough. If you think that the Rauner machine, looking for someone to run against Plain Jane Lisa, picked Harold from among the thousands of attorneys in this state with as-good academic credentials and wider experience in public service to run for the top legal job in state government for any other reason, you might be interested in the state office building in downtown Chicago that the governor would like to sell you.