Board votes to rename park in honor of acclaimed Black veteran 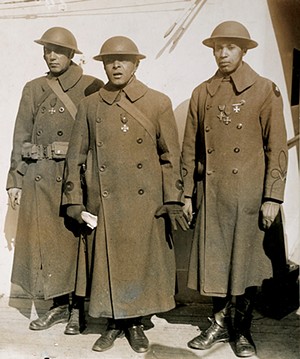 Photo courtesy of the National Archives and Records Administration.
Springfield native Otis B. Duncan, center, was the highest-ranking African-American officer to serve in the American Expeditionary Forces in World War I.

What was known as Douglas Park (943 W. Mason St.) in Springfield has a new name. On Nov. 18, the Springfield Park District board voted 6-1 to rename the park in honor of Otis B. Duncan. He was a Springfield resident who served in World War I and was the highest-ranking Black member of his division.

The proposal began earlier in the year at the behest of park board member Lisa Badger, who had told Illinois Times, "We have over 30 parks ... we have one park named after a Black person. So it's not representative of our community." Badger said constituents had asked for her to push for the park to be renamed in honor of Frederick Douglass, a civil rights leader born into slavery, an Abraham Lincoln contemporary and abolitionist. That got the ball rolling for the name change. In September, the board decided it would seek public input on for whom the park should be named. It had formerly been dedicated to Stephen A. Douglas, an Illinois lawyer and politician.

The American Legion Post 809 in Springfield is named after Duncan and members had advocated for the park to be named in his honor as well. "In this day and age, in light of current social movements in the country, I think it's a very positive move for the city and for the park board," Commander Richard Rump told The State Journal-Register of the decision.

Black Lives Matter Springfield co-founder Sunshine Clemons echoed that sentiment and lauded the park board for moving swiftly and gathering community input. "In the midst of what's been an extremely rough year for a lot of people, it's important ... that our city continues to move forward in recognizing some of the wrongs that have been done historically and then taking corrective steps to fix them," she told Illinois Times.

A statue of Douglas was removed from the Statehouse grounds in September, as was a statue of Pierre Menard, a slaveholder and the state's first lieutenant governor. "History changes all the time. The way we live our lives today in 2020 influences the way we see the past," former state historian Samuel Wheeler had told Illinois Times in conversation about Douglas. Wheeler said Douglas profited from slavery, through a plantation in Mississippi in his wife's name. "The slavery system, slave labor, helped fund his political career, and so that is significant."

Badger said there were about 75 or fewer suggestions from the public during the comment period, and the majority were in favor of Douglass. She was the sole "no" vote in the decision to name the park after Duncan, because she said she thought the change should reflect the name that had received the majority of support from the public.

Still, Badger said, the change is positive. "He's well worthy of honoring, it's not anything against him or his legacy in any way. I went sheerly on what was brought to me by the public." She said reconsidering the names of parks and other spaces under the board's jurisdiction will be an "ongoing process" with future name changes to potentially come. Badger said the goal is "having more adequate representation within our parks system."

Erika Holst wrote about Duncan for Illinois Times in 2018:

Duncan was active in Springfield's civic and political life. He was a member of the Young Men's Society Club, the Colored Voter's League, the Protective Order of the Elks, the Afro-American Equal Rights League and the Stalwart Republican Club. A lifelong Republican, Duncan ran for alderman of Springfield's First Ward in 1898 and again in 1906. In both elections he won his primaries against a white challenger but was defeated in the general election.

Read the entire article at: tinyurl.com/yxv2bhj8