Refreshing a symbol of democracy 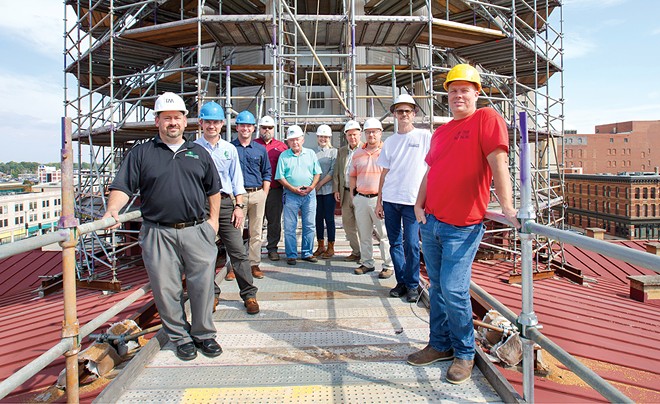 "The Old State Capitol is not just a building but an artifact, with numerous stories to tell," says Justin Blandford, superintendent of Springfield's state historic sites for the Illinois Department of Natural Resources. The state of Illinois is making a major investment to preserve this historic and iconic landmark. A $1.65 million capital project is nearing completion. "If we do our job well, we will use the building to illustrate a larger picture of the past," said Blandford. The interior of the Old State Capitol reopens to the public Oct. 7.

For months scaffolding has surrounded the dome as part of a capital project to restore the dome and drum and address water infiltration issues. The project is funded through Gov. JB Pritzker's "Rebuild Illinois" capital plan. R.D. Lawrence Construction Co., Ltd. is the general contractor. Ferry and Associates Architects is the architectural/engineering firm.

"The character of downtown makes a community," says Springfield architect Bruce Ferry, who has had his office in downtown since the early 1990s. "Downtown is the cultural center and core of the community. The Old State Capitol is the core of Springfield's downtown."

"Maintenance is not a glamorous topic," says Blandford. However, deferred maintenance can result in significant damage and higher costs for repair. Problems at the Old State Capitol have been addressed in small ways over the last eight to ten years to mitigate damage caused by water infiltration. This undertaking, however, is much more than a maintenance project. It is part of ensuring the important stories of freedom that transpired in this very historic place continue to inspire people today and into the future. 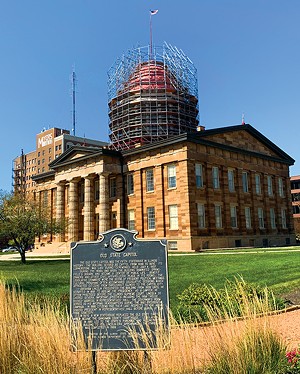 The Old State Capitol served as Illinois' fifth Statehouse from 1840 to 1876. It was the power base for all of state government, including the governor, legislature and Supreme Court. In this building Lincoln served his final term as a state legislator in 1840-1841 and represented cases before the Illinois Supreme Court. Here, on a hot summer day in June 1858, Lincoln gave his famous House Divided speech at the Illinois Republican State Convention when he was a candidate for the U.S. Senate. It was also here that Illinois became the first state in the nation to ratify the 13th Amendment on Feb. 1, 1865. Shortly thereafter, due to the tireless efforts of John Jones, an abolitionist and civil rights leader, Illinois voted to repeal most of the existing Black Laws that discriminated against African Americans. Blandford describes this as "one amazing week in history." Once a new State Capitol was constructed, the Old State Capitol served as the Sangamon County Courthouse from 1876 until 1966. The 1960s marked the centennial of the Civil War, which sparked renewed interest in the historic significance of the Old State Capitol. Concurrently, the county needed more space and decided to build a new courthouse. The Old State Capitol was returned to state ownership and a massive reconstruction occurred from 1966 to 1969.

Don Ferry and Wally Henderson of Ferry and Henderson Architects developed an audacious plan to remove the 3,300 exterior dolomite stones, dug from a quarry that is now under Lake Springfield, number and store the stones, and then painstakingly put them back in their original places from 1837. Architects photographed the building and labeled each stone with a code to identify its original location. Master prints of the codes were stored in four separate locations to ensure the plans would not be lost to fire or other calamity. The stones were stored at the Illinois State Fairgrounds until being reinstalled. After the stones were removed, the old courthouse was demolished. A two-level parking garage and space for the Illinois State Historical Library were built underground. All of the indoor surfaces were rebuilt as identical as possible to the date Lincoln delivered his House Divided speech, but all materials were new. Original building materials were dumped in deep coal mines, which architect Wally Henderson said was "to prevent an endless supply of authentic or simulated souvenirs." Each stone weighed 900-1,200 pounds. A large crane was used to swing the old stones back into place. The reconstructed Old State Capitol has a steel frame that supports the old stones and the reconstructed interior. There were many skeptics, but the project was a remarkable undertaking and highly acclaimed. Only a few of the original stones were cracked and unusable.

The new House chamber was used for the Illinois Constitutional Convention in 1970. In the ensuing years, the Old State Capitol has been an important state historic site and tourist attraction as well as a venue for many ceremonial functions. Naturalization ceremonies are just one example of how this historic building is making history today.

Thousands of people have gathered at the Old State Capitol to mark both the end and the beginning of a presidency. Lincoln's body lay in state in the same room where he delivered his most memorable speeches. A crowd of 75,000 mourners filed past to pay their respects. In February 2007 then-U.S. Sen. Barack Obama officially announced his candidacy for the presidency at the Old State Capitol, and in August 2008 formally introduced his vice-presidential candidate, Joe Biden. 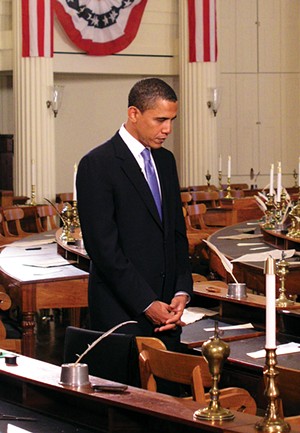 PHOTO BY RICH SAAL
Candidate Barack Obama inside the Old State Capitol in 2008 during his visit to announce his vice-presidential running mate, Joe Biden.
Time takes its toll, and historic sites require ongoing maintenance. There are numerous components to the $1.65 million state capital project which is nearly finished. These include replacing the flagpole with a safer and more efficient model, replacing the coating on the iconic dome, inspecting and refurbishing the columns, restoring the windows and installing storm windows, re-roofing the drum and replacing damaged materials, restoring the interior drum and repairing and painting damaged interior plaster.

Restoration of the dome is the most obvious component of the current capital project. Blandford describes the dome as an inspiring symbol of democracy. "The project to restore the dome and drum is critically important to the preservation of the historic site," said Blandford. "It has been more than 20 years since substantial work was completed in these areas, and the damage caused by water entering the historic site was significant and spreading."

Bruce Ferry explains that restoration needs to start from the outside of the building to the inside and from the top of the building down. Initially the dome was not part of the project but, given the magnitude of the expense for the exterior scaffolding installed on the exterior, architects recommended evaluating the dome. Binoculars and drones were used initially to inspect the dome. Ferry and Associates hired the Chicago office of Wiss, Janney, Elstner Associates to conduct a detailed examination of the dome's condition. Individuals rappelled down the dome, conducted adhesion tests and determined that the coating, which provides protection for the dome's metal panels, needed to be replaced. As a result, the scaffolding was extended higher. The coating of the dome is being removed and new coating applied.

Bruce Ferry considers it a privilege to work on this significant building, just as his father did before him. Ferry was a kid growing up in Springfield getting ready to go to prep school when his father, Don Ferry, was a partner in the team that carried out the massive restoration project in the 1960s. Bruce Ferry says he was completely taken by the project at the time. He was "totally infatuated" and cut out every article from the newspaper that he kept in a spiral-bound notebook.

After months of being closed to the public, the Old State Capitol reopens Oct. 7. The exterior work will be completed later this fall. A second, even larger, project is in the design phase which will include new fencing, walkways, elevators, plumbing and other internal systems.

While the site was closed to the public, improvements have been made to enhance educational programming. The law library has been transformed into a video room, and the auditor's office is now an educational gallery that features a number of artifacts original to the building. A powerful new 11-minute video, developed in partnership with Storyteller Studios, conveys the historical significance of the Old State Capitol and its relevance today. The purpose is to communicate the magic of the building to people who aren't able to witness firsthand events such as the emotional naturalization ceremonies. For example, the video introduces guests to people who have experienced naturalization ceremonies, youth who have worked at the site and NAACP meetings held to help bridge the racial divide. The video is also accessible online at historicspringfield.dnr.illinois.gov.

The Old State Capitol is a window to the past. While Abraham Lincoln is the most famous person associated with the Old State Capitol, the intent is to tell stories of people beyond Lincoln, such as Frederick Douglass, who was the first African-American to deliver a speech in the Illinois Capitol. In April 1866, a year after Lincoln's assassination, Douglass spoke at the building on two consecutive days about the assassination and its consequences and reconstruction. And the building's story includes John Jones, who was a civil rights leader and first African American to be elected to public office in Illinois. Historical documents, including a June 18, 1852, pay warrant in the collections of the Illinois State Archives, will also come to life in telling the story of William H. Butler. He was a janitor who worked inside the Old State Capitol, where he had few rights. Outside the building he was a civil rights leader. Stories about the role of women in the building are also being developed.

Karen Ackerman Witter retired from a long career in state government. She was the associate director of the Illinois State Museum, where she had the opportunity to collaborate with Justin Blandford on many projects.