Youngest person to serve in the General Assembly rules out lobbying, law school 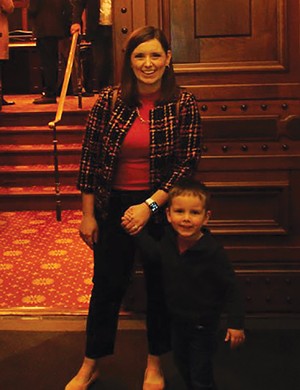 "I don't want a eulogy written. People keep coming up to me with a sad look in their eyes and saying, 'You had such a wonderful career.'"

At age 30, state Rep. Avery Bourne, R-Morrisonville, says she has plenty of career still ahead of her. She is leaving the General Assembly in January after an unsuccessful bid for the Republican nomination for lieutenant governor.

At age 22, she became the youngest person in the history of the state of Illinois to serve in the General Assembly. And after seven-and-a-half years in office, she has served longer than most lawmakers.

Well, she says she doesn't know. But she would like to put some rumors to rest. She said she has no desire to be a lobbyist but would like to continue to have something to do with public policy.

In 2015, Bourne took Wayne Rosenthal's 95th District seat in the House when he left to become director of the Illinois Department of Natural Resources under Gov. Bruce Rauner. At the time, she was a first-year student at Washington University School of Law in St. Louis.

Ironically, when Bourne leaves office, she will be replaced by Rosenthal, who ran for the position when she opted to try for lieutenant governor. This has bred a conspiracy theory that Rosenthal is only a placeholder who will resign from office so that he can again be replaced by Bourne.

"I'm really glad that my constituents will be getting somebody who has that experience and already knows how to do constituent service," she said.

During her time in the Illinois House, she experienced many of life's firsts. She fell in love, got married, had a baby, moved into her dream house and was promoted into legislative leadership.

She met her husband, Aaron DeGroot, while he was working on legislative staff.

"He asked me on a date during my primary in 2016, and I told him 'No' because I was focused on the primary. I was like, 'You can take me out after the primary.' We've been inseparable ever since. We dated for over two years and then got married."

Their son, Marshall, is now 3.

During her pregnancy, Bourne, who identifies as pro-life, was outspoken in the legislative debate concerning abortion.

"It's important that we point out to voters where the law actually is in Illinois, because in Illinois you can have a taxpayer-funded abortion up to the point of birth in a facility that's not regulated as highly as a medical facility. And oh, by the way, if you're a minor, your parents have no right to be notified," Bourne said of the measure that ultimately passed.

Having a pregnant woman be the point person in the debate was part of a political calculation on the part of the GOP.

"It's really important to me, and it was important to our caucus to not fall into the trap they wanted to paint us in," said Bourne. "I'm sure the Democrats all had their speeches ready to go such as: 'All of you men are lecturing us on what needs to happen.' We weren't going to fall into that trap. Here's a woman of childbearing age talking about the realities of the policy."

Nearly every news story written about the legislative debate noted that Bourne was quite obviously pregnant.

"They (Republicans) picked the right quarterback to carry the ball and it just set up this clash of the titans," Cassidy said. "And it was so appropriate... this was a great way to give the topic the dignity it deserved."

"We have a really solid friendship, which for some folks, might be confusing. She's someone I've watched grow as a legislator, and she's someone I really like. So it wasn't, 'I'm debating a pregnant woman.' It was, 'I'm debating a colleague with a solid understanding of her perspective of the issue.'"

On the surface, the pair would seem to have little in common. Cassidy is urban, gay and liberal. Bourne is rural, straight and conservative.

"We immediately bonded over our love of baking, babies and dogs. And we're both kind of crafty. So, we have a lot in common. She's just somebody that I connected with pretty early on. About a year ago she gifted me her favorite baking cookbook, which remains a favorite item," Cassidy said.

While the pair disagree on abortion, they worked together on ethics reform legislation, which Cassidy noted they so far have failed to pass.

Former state Rep. Mike Murphy, R-Springfield, has known Bourne since she was a child. He said he was a bit surprised that she dropped out of law school to become a lawmaker.

"I remember I had a conversation with her dad and he told me that Avery said, 'I'm going to law school so I can get involved in politics. Well, why can't I get in politics now?' It made sense," he said. "And I was not surprised in the least that she blew them away in the interview or vetting process. I heard that she was by far the most outstanding candidate who put her name in. Some were surprised because of her age that she was selected. But I wasn't."

Bourne said she has no desire to return to law school.

"I think that a lot of people thought I was crazy to leave law school and come and do this," she said. "But I know now that you can influence policy and write policy without going to law school. So, I think I've surpassed what I would've learned in law school about the legislative process and laws and how they're actually written."

Scott Reeder is a staff writer for Illinois Times and can be reached at sreeder@illinoistimes.com.