The community room in the new Matheny-Withrow is a beginning 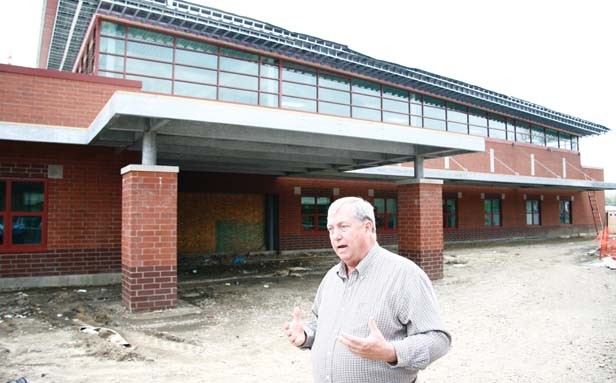 PHOTO BY PATRICK YEAGLE
Dave Smith, director of operations and maintenance for School District 186, leads a tour of the new Matheny-Withrow Elementary School, which features a community room.

Schools, conventionally, seek to train the minds of their young charges. The problem is that it is not only their minds that show up every day in the classroom. Their bodies, their attitudes, their expectations of themselves and school, their social skills – they all show up too. A hungry kid isn’t going to learn. Neither is an angry one, or a fearful one, or a sleepy one or one with a toothache or one who doesn’t know how to get along with others.

Helping Springfield’s many underachieving students depends on what goes on in their schools, all right – but not necessarily, and certainly not only, on what goes on in their classrooms. District 186 this fall will open a new building on Pope Street serving the Matheny-Withrow elementary district. Among its features is a special room dedicated to community use.

The State Journal-Register editorially praised the community room as a new way to “engage and empower” parents. I’m not certain what “engage and empower” means, but I am certain that the idea of using neighborhood schools to teach families as well as kids is not new. As the 20th century approached, a generation of poor families was crippled by the dislocations, cultural and geographic, resulting from mass migration (including that from the American countryside into its suddenly big cities) and overcrowding and poverty. Parents were left to prepare their children for a life they did not themselves understand and with which they themselves often could not cope.

The settlement house was devised as a means to ease that transition into that new life. It was, in effect, a school for adults. Settlement workers taught English and showed how to feed and care for infants. (Not all young mothers, separated from extended families, knew how.) They advised on dealing with slumlords and aldermen and cops and other criminals and brought in nurses to check for tuberculosis and other diseases common among the poor. They counseled women beaten by husbands and fathers who themselves were angry or drunk and devised alternatives to gangs for their kids.

Then as now, problems at home weigh especially heavily on the small shoulders of the children. The neighborhood school was seen as an oasis for kids in a crowded, filthy and uncaring city. Playgrounds were an early step toward dealing with the whole child, and others followed. In their more elaborated forms, neighborhood schools on the Addams/Dewey model (and to some extent the field houses of new public parks) functioned as extensions of the settlement house. As one historian of the movement put it, John Dewey brought the school into the community and Jane Addams brought the community into the school.

These days our poor neighborhoods have new populations, but the problems are much the same. Ill-educated adults are still ill-prepared to help children at home, still have problems finding decent housing, still have nothing for the kids to do after school. Women are still being beaten, kids still prey to gangs and unsavory amusements (even if they are found on electronic music halls).

Past time, you might think, to revive the idea that a neighborhood school ought not to be merely a school in a neighborhood but a school for the neighborhood. If you do, you share that opinion with a new generation of reformers focusing on schools in dozens of U.S cities. They are not school reformers as usually defined. School reform aims to fix schools, while these worthies – whose background tends to be the social services rather than education – aim to fix the kid and her family.

The workshop for these repairs is the “community school.” In addition to the usual daytime school program, a community school is open to students, families and the neighborhood before, during and after school, seven days a week, all year long. It is jointly managed by a community school coordinator and the school principal; it is jointly financed by the school system (which pays for the usual school operations) and community agencies. The latter – private charities, universities, social service nonprofits, city or county youth agencies, libraries, public health clinics – pay for everything else. “Everything else” can include classes in child rearing and nutrition, sundry after-school programs, mentoring and tutoring, job training, health clinics, communal dining facilities.

Some neighborhood services have been offered in school buildings in Springfield, such as the branch of Lincoln Library that used to be housed at Southeast High School. And yes, every teacher or learning specialist is perforce a family counselor to some extent. The difference between a regular school that offers services to students and a community school is priority and focus and the scope of services available. Such schools are not a cure-all, of course. But unlike so many school reforms, community schools at least try to deal with the real problems.