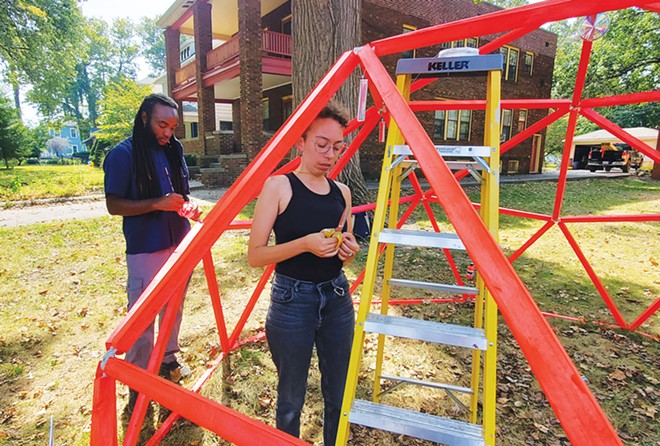 credit: Rachel Otwell
Erin Washington hangs prisms from inside the dome – titled “afterglow of radiation” – while Hasani Cannon assists by touching up the paint.

It was a recent weekday afternoon in Springfield when Erin Washington was hanging crystal prisms from a neon-pink geodesic dome. The dome is outside of Springfield Art Association (SAA) in the Enos Park neighborhood. It is a bright pop of color that draws attention to the lawn, which includes a nearby mural and other displays of public sculpture and art. Washington was an artist resident who stayed on the SAA campus earlier this year to develop the work. As Washington hung up prisms to cast rainbow patterns from inside the dome, an art student went around with fresh neon paint to touch up the structure.

Washington's work is part of this year's Terrain Biennial, an effort to make art more accessible to the general public and create community-based conversation and celebration. Every two years, artists partner with residents in neighborhoods and create artwork that can be seen outdoors. Often, that means the work hangs from a porch or a fence. Sometimes it takes a more sculptural form in the lawn. Sometimes it's participatory, such as a wishing well that is part of the showing this year. Current installations are up and ready to be viewed from now until Nov. 13. 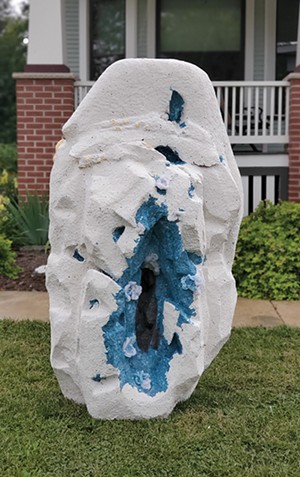 Credit: Rachel Otwell
A work titled “Funfetti Geode” by E. Ainsley. Each site includes a stand of informational handouts about the artworks and artists.

While the dome looks like a bright and inviting piece of playground equipment, it's not for climbing, rather it's for pondering. "I'm super fascinated with Buckminster Fuller and utopias and dystopias," explained Washington. Fuller, born in 1895, was a future-focused architect who lived and worked in Illinois.

Washington, of Chicago, applied for the residency "because I really respected Sabina Ott. She is someone that I had the privilege of being in a couple of group exhibitions with. Her passing away was hard for a lot of us in Chicago." Washington said Ott's spirit of inspiration, kindness and generosity was something worth paying respect to.

Ott was a widely loved and accoladed artist, curator and educator based in Chicago who founded the Terrain Exhibitions project. Originally, artists were invited to display their works outside of Ott's home in Oak Park, adjacent to Chicago. The effort grew from there. Terrain has taken place every other year, starting in 2013. While the hub of activity is still Chicago, satellite communities have popped up in places like New York and India. Springfield has one of the most involved satellite locations. Ott, who had cancer, died in 2018. Part of her legacy is Terrain, which continues to expand its reach.

This is the third year Terrain has taken root in Springfield. Co-organizers and curators, Allison Lacher and Jeff Robinson, are artists themselves who often collaborate on projects. They are also co-vice presidents on the board of directors for Terrain. Several years ago, the pair founded an experimental, alternative art space on the SAA campus called DEMO Project. DEMO was active for about four years before the house that held the gallery was demolished, as planned, in 2018 as the SAA expanded its footprint with new studio space.

Together, Lacher, Robinson and others on the team hosted a number of contemporary artists who explored heady issues such as social justice and the environment. The works were perplexing at times, and often immersive. One outfit roasted a pig outside the DEMO and fed attendees.

In 2017, Ott reached out to the duo and asked if they might be willing to host a Terrain site. That year, with the help of the Enos Park Neighborhood Improvement Association and SAA, 16 sites were secured for the art installations. This year, there are 24 sites involved. "From the beginning, it was an event that brought artists from all over to Enos Park," said Lacher. Most participating artists this year hail from Illinois but there are those from other states such as Iowa, Missouri and Ohio.

On Oct. 2, about 100 people braved the rainy weather to take part in the opening of Terrain in Enos Park. The sites, on display through mid-November, are located between Fourth and Eighth Streets in the blocks near but south of North Grand Avenue.

Hasani Cannon toured the neighborhood with a group of friends during the opening. The University of Illinois Springfield student helped put together one of the installations, which was curated by professor Shane Harris and executed by students. The exhibition is titled "The Ornaments of Material" and the students created pieces with unconventional items purchased at a dollar store.

Credit: Rachel Otwell
A piece title “xoxo” by artist Gina Hunt, inspired by the repetition of the letters that are a symbol for affection.

"It was really interesting to experiment with different material," said Cannon, who made a piece of art using fabric rugs. The result is a serpent-like structure. Cannon, who graduated from high school in the Chicago area in 2019, was part of the Oak Park Area Arts Council program that pairs young and established artists who in turn create mosaics and murals. "I definitely think this is the way the art world should be," Cannon said about Terrain, which allows art to be "more integrated within people's neighborhoods so that it is not so siphoned away."

Cannon hit on the mission of Terrain which its website, terrainexhibitions.org, describes as "an act of radical decentralization, taking art from privileged urban centers and bringing it into everyday spaces."

For Andrew Heathwaite, art moving into an everyday space means his bedroom. "I've always been struck by walking down the street and seeing something different, something interesting," he said about the past years of Terrain. "I wanted to be part of that." 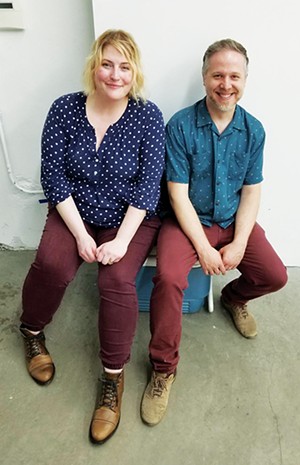 Credit: Monaco, an art gallery in St. Louis
Allison Lacher and Jeff Robinson are co-organizers of Terrain in Springfield. This picture is from earlier this year, during the opening of a show they collaborated on together.

While most Terrain art exists outside a home, artist Christopher Tice of Lincoln wanted to create digital art that would originate from inside the house and be seen from outside. "It's a clock without numbers, it uses colors," Tice said about the digital art piece which uses a calculation to change color based on the time the sun sets and rises. "Every day, as the nights get longer, so too do the duration of colors." The seven colors are based on the seven chakras, which are considered energy centers in the body in some Eastern faith traditions.

Heathwaite has made some accommodations in order to live with the lights. He has a curtain around his bed. "It's good to have a change of pace – something different, it encourages me to take a look at my own habits and be more aware."

At the recent opening, three artists who live and share a studio in Columbus, Ohio, were on the scene – Morgan Rose Free, Cory Mahoney and Britny Wainwright – each with their own installations at various sites.

Earlier this year, Mahoney was an artist resident in the Enos Park neighborhood and researched Springfield history – especially history that wasn't related to Abraham Lincoln. One piece of architecture that caught his eye was Pillsbury Mills, the dilapidated former food-processing factory not far from the neighborhood. Learning of the public health hazards it poses struck him. "The past industry that's present in the Midwest, in general, is really interesting to me," he said. 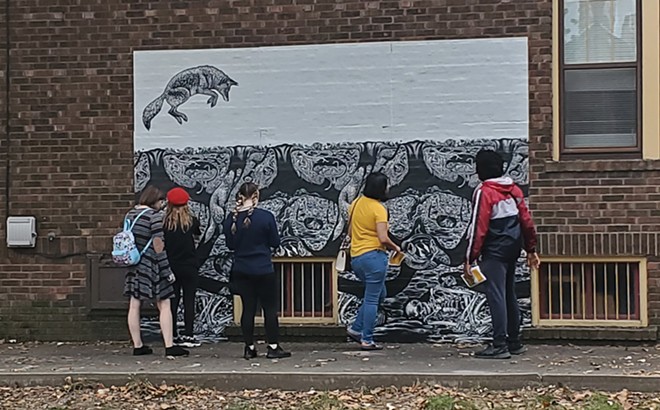 Credit: Rachel Otwell
On Oct. 2, onlookers took in a mural by Emmy Lingscheit. “This project was influenced by the feeling of withdrawing into our private dens during the first winter of the pandemic, and the reminder that the world is both fragile and enduring,” the artist statement reads.

Various bits of architecture from around Springfield were merged together in Mahoney's contribution, a carved ceramic multidimensional piece that imagined a landscape free of Lincoln, the figure most tourists come to Springfield to learn about.

Free, also a former Springfield artist resident, created a colorful, eye-catching installation that rests on the balcony of one home. "I've been making these pieces that are wooden frames with these woven portals," she explained. Titled "A Way In, A Way Out," the work serves as a visual escape hatch. "A lot of the time, I'm thinking about climate anxiety, both in my life and in my artwork," she said. "I wanted to make something aesthetically beautiful that could be an escape from that."

Wainwright worked on upholstered and ceramic flower boxes. "I explore themes of the home, the domestic space, in my work." Wainwright said the concept of home has meant something different to many people during the pandemic, and she wanted to create a sculpture that "acts like the fringe between private and public space."

Hanging from the fence of a home near the SAA is a colorful tapestry. It's a banner, collectively put together by the Peoria Guild of Black Artists. The guild was created last year in the midst of civil rights uprising. Alexander Martin is a founding board member of the guild.

"It's not just a meeting of common minds, it's a group that supports each other," said Martin about the guild. Members sewed in various pieces of fabric that held personal meaning. For the artists, sharing their voices and work outside of the confines of a regular gallery was a welcome idea, said Martin.

Terrain has an activist undercurrent in that it aims to decenter "the institutions that typically dictate how we engage with art," said Robinson, the co-organizer of the project in Springfield. And it is truly a communal affair. While it involves a global community of artists, in Springfield, the Enos Park neighborhood association and SAA are key partners. "It's certainly resonating with the neighborhood," said co-organizer Lacher. She said residents were reaching out to her before the planning started, eager to host a site. 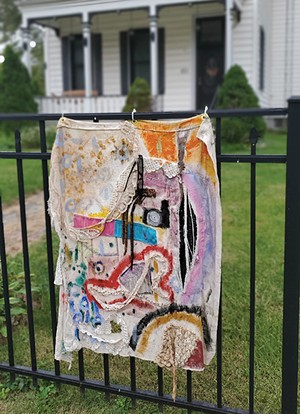 Credit: Rachel Otwell
A description of this banner by the Peoria Guild of Black Artists reads, “With guilds, historically, there are banners, guild emblems and crests. Black people in the U.S. do not get that history, ours was removed, so it is our time to make it now.”

The title of Terrain this year is "Keep in Touch" – a nod to the pandemic and the desire for connection even when distance is necessary.

Betsy Dollar, head of the SAA, has participated as an artist in past years. This year her own home has colorful banners by another artist on display with phrases like "all my love" and "we walk together."

For some people in the neighborhood, Terrain and the strange and provocative sorts of art it welcomes might not be familiar. Helping people question the limits of what art can mean is a service to the community, said Dollar. "They're expanding people's horizons a lot by being able to experience things in their own yard as art." 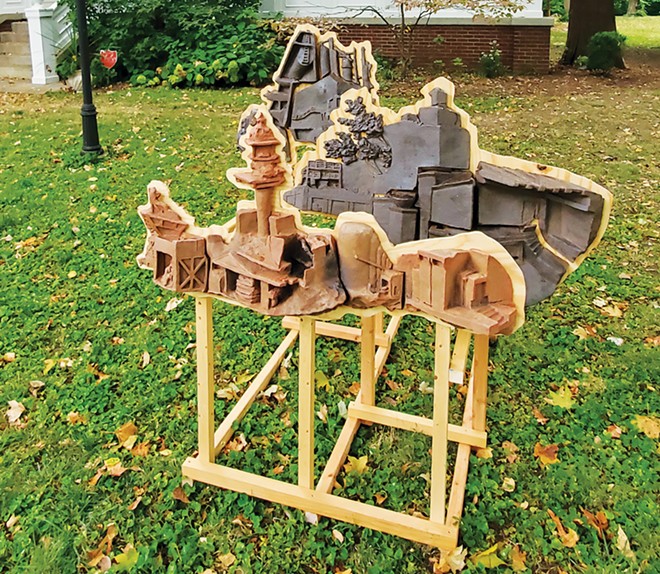