Both political parties have moved away from the center 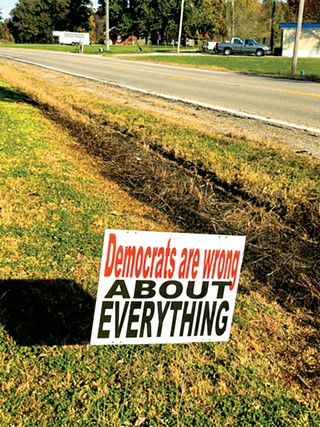 PHOTO BY SCOTT REEDER
As rural areas become more partisan, signs like this one on Old Route 36 near Riverton are cropping up and expressing voter displeasure.

Just when it looked like things couldn't get any worse for Democrats in rural areas, Virginia voters proved them wrong.

This month, the Republican gubernatorial candidate captured more than 70% of the vote in 45 rural Virginia counties, compared to just four counties any of the GOP's candidates carried by at least that margin in 2008.

But this isn't just a Virginia story – it's one playing out in Illinois and just about any other state, said Robin Johnson, a Monmouth-based political consultant who advises Democrats on how to appeal to rural voters.

In Illinois and elsewhere, Democrats are focusing their energy on vote-rich cities and increasingly ignoring white, rural communities, he said.

"During the last four years, for a lot of Midwest Democrats at the state legislative level, they've had to go campaign and not use their party label because the brand is so toxic," Johnson said. "They feel they've got a chance with these rural voters, if they can get to them before they ask what party they're in. ... The Democratic Party has just not invested enough effort in rural areas and a lot of their actions come off as being elitist and condescending to rural voters."

Years ago, I watched some volunteers from East Coast and West Coast universities working on an Illinois congressional campaign ridicule working-class Democrats as they left a rally at the Illinois State Fair. Their work boots, trucker caps and overalls didn't fit with the volunteers' image of the party.

When I covered the Illinois General Assembly full time, Chicago Democrats would derisively refer to the late state Rep. Joel Brunsvold, a Democrat from the Quad cities, as "Guns-vold" because he supported gun-owner rights. The idea of a fellow Democrat having a differing view of gun control was an anathema to them.

Or there was former Sen. Gary Forby, a Democrat from deep southern Illinois. He dug septic tanks for a living. His voice was pure working-class and his commitment to the party was every bit as real as that of his Chicago counterparts – who ridiculed his accent every time he rose to speak on a bill.

Former Gov. Jim Edgar, a Republican, told me he sees parallels between how some Democrats view rural voters and how some Republicans view Black voters.

Party insiders often want campaigns to focus on getting out votes from their base rather than putting additional resources toward persuading voters in communities where they have not been as popular, he said. Edgar said he disagreed with this view and campaigned extensively in Chicago's African American neighborhoods.

"Democrats apparently need to go back to the drawing board when it comes to rural America. And it's not just Virginia you saw in this last election. In about every state, Donald Trump did very well in rural areas," he said.

U.S. Rep. Cheri Bustos, D-Moline, is one of the few Democrats in Congress representing a district carried twice by Trump. So, what's her secret?

"I don't think it is a magic formula. It's showing up. It's using your two ears and one mouth proportionately," she told me.

I've been friends with Bustos for more than 30 years. We spent a decade together as reporters for the Quad-City Times.

When we spoke earlier this month, she added, "Scott, you know Tractor Supply, but you probably don't know Trader Joe's very well because (rural areas) don't have any Trader Joe's. We need to go into Tractor Supply and listen to folks rather than Democrats just going into Trader Joe's."

That's the sort of retail politics that is effective whether someone represents an urban or rural area. This growing alienation between the Democratic Party and small-town residents should be of concern to all voters living outside of metropolitan areas, no matter our political affiliation.

Why? Well, for starters, neither party has all the answers, and it's only through collaboration that we can move forward. Also, when a block of voters identifies too strongly with one political party, expect those voters to be taken for granted by one and ignored by the other.

I'd much rather have candidates competing for our votes. After all, all voters are worthy of having their concerns heard and responded to.

I'm a product of rural Illinois. I grew up on a hog farm south of Galesburg. Our neighbors and friends were Republicans and Democrats. But most everyone we knew – no matter which party they identified with – was centrist.

I don't believe that rural voters' views on core issues have changed that much over the last several decades. But the political parties have changed, with fewer and fewer moderates holding office.

Bustos, who is leaving Congress at the end of this term, suggested the best way for her party to win back its appeal with rural voters is straightforward: "We need to listen and take what we learn back to Washington, D.C., do something with it and get results."

It's hard to argue with that. After all, isn't that how democracy is supposed to work?

Scott Reeder, a staff writer at Illinois Times, can be reached at sreeder@illinoistimes.com.