Illinois’ difficult history with the Other 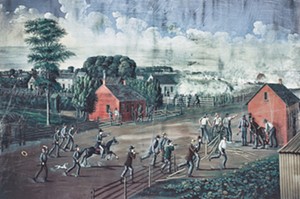 PAINTING BY C.C.A. CHRISTENSEN
“The Battle of Nauvoo.”
“The Battle of Nauvoo.”
PAINTING BY C.C.A. CHRISTENSEN
Consider this nightmare scenario. Thousands of religious refugees whose beliefs are radically outside the mainstream, acting with the connivance of compliant politicians, establish a theocracy within the borders of the Illinois commonwealth. Believers vote the way their prophet tells them to and establish their own courts. Social tensions finally result in guerilla war with their neighbors. Assimilation being impossible unless one side or both surrenders aspects of their identities they regard as essential, state officials decide that the only way to prevent further bloodshed is to agree to the strangers’ expulsion.

Couldn’t happen? It did happen, in Illinois during the 1830s and ’40s when Mormons in flight from persecution in Missouri found a temporary safe haven in Hancock County.

The ancestors (spiritual if not actual) of those among us who persist in the fantasy that America is, always has been and always ought to be a nation of white Protestants are the Pilgrims. They came here not merely worship freely – they were doing that in Holland, from whence they emigrated – but to preserve their own culture, which they sought to do by separating themselves from their ungodly neighbors. What the Pilgrims did not know, and what their ancestors refuse to accept, is that the Pilgrims were only one group of Americans, the others being Spanish colonists and African slaves and Anglican exiles and Indians of a dozen cultures.

Illinois being a state of immigrants (not a few of whom were current and former refugees) much of our history has been the story of the ostracization, exploitation and exclusion of a succession of Others by the descendants of those white Protestants. The Mormons they drove out. Others they trapped in. In the early decades of the 20th century, hundreds of thousands of people, most of them poor and many barely literate, fled to Illinois from oppression and poverty. I speak of course of the Great Migration of African-Americans from the land of the lynch mob and Jim Crow to northern cities like Chicago. The cultural gap between the rural South and the big city loomed little smaller than the one separating Islam and the West; many former slaves had remained African, having been denied any chance to become American. Chicago and Illinois gave them hardly a better chance. Black refugees were sealed up in ghettos with the worst housing and the worst schools and the worst jobs; decades later, many of their descendants still lag in income and education and family stability.

Isolation, then, is not a solution for either immigrant or host, as Europe is learning. As so many newcomers have done in Illinois, many of the refugees to the West self-segregate in ethnic ghettoes for social comfort against the disdain, real and imaged, of their hosts. Muslims from East Asia, Algeria and Turkey remain half-digested lumps in the guts of Britain, France and Germany respectively. The Brits are only lately asking what being British is and how to achieve it. The French blithely insist that newcomers become French, without doing much to help them, or even to explain what Frenchness is. (The French themselves are not sure, Frenchness changing because of the presence of francophone Africans.) America, in contrast, has always been the sum of its parts, and as the parts changed, so has America, mostly for the better.

Sweden has long offered a different way. The famously tolerant Swedes welcome refugees with decent housing, language lessons, child care and a path to citizenship. But the sheer numbers of people escaping the chaos in the Middle East have stretched the resources and the patience of even the Swedes a little thin. Readers tempted to conclude that Sweden’s recent experience suggests that we would be wise to embrace timidity and smallness as policy should keep in mind the vastly different scale of Sweden’s efforts compared to ours. If the U.S. were to accept refugees at the same rate as the Swedes, it would admit 4.8 million refugees this year alone.

There have always been millions of Americans who feel that “their” America is being taken away from them by strangers. So it was, and is; they are right about that. What they are wrong about is that this is new. For example, it wasn’t that long ago that America’s bunkered majority was asking whether America could be America with large numbers of Roman Catholics in it.

That Illinois became the great state it was, and might be again, owes to those who trusted what Lincoln called the better angels of our nature when they found they had new neighbors. The fearful, the ignorant, the confused never grow up, apparently, but eventually they do grow tired. The rest of us can draw one of two lessons from their experience – that it is folly to accept strangers, or that it is folly to accept strangers without offering them comprehensive help in making them no longer strangers.