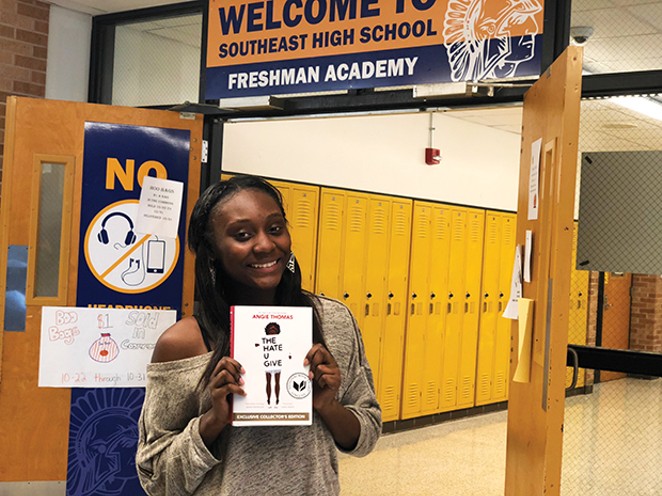 Early this month, a Springfield teacher took a group of students to a movie theater to view a popular new teen drama based on a bestselling novel. It was a special screening just for students who had earned the right to be there by reading the book and writing a paper about it. Of course, using a movie to bribe kids into reading literature is one of the oldest tricks in the teacher playbook. But that’s not what was happening with this movie, this piece of literature and this teacher.

The teacher is Kathryn “Kassie” Jones. She teaches literature, creative writing and journalism at Springfield Southeast High School. Named for its location in an economically challenged part of town, Southeast has the highest percentage of African-American students of any high school in the Springfield district.

Jones, who is white, graduated from Rochester High School – in a small, prosperous suburb six miles away. But look around her classroom and it’s clear she’s made Southeast her home. Over the eight years she’s taught here, she’s filled an entire wall of bookshelves with young adult novels, and plastered every surface with snapshots of students holding their favorite books. She prides herself on being able to match every reluctant reader with a book they’ll love, and then keeping that fire lit. One way she does that is through a book club she started seven years ago.

“The very first year I did it, I did it with kids that were like struggling readers,” she says. “We were reading this series of books – the Hazelwood High trilogy. We don’t teach the third book, but we have copies of the third book. So I thought it was kind of just like the perfect time to start a book club. I was like, ‘Well, come after school and we’ll read the next one, and I’ll have snacks and stuff.’ And after that, it just kind of spun into its own little thing.”

The club churns through anywhere from seven to nine books per year. The students choose which books to read through a complicated democratic process that Jones tries to stay out of. The club went through a dystopian phase with The Hunger Games and Divergent series, and more recently explored LGBTQ issues with Dreadnought, We are the Ants and Beautiful Music for Ugly Children.

“They also love books that are being made into movies, because they know I’m going to take them, or we’re going to watch it here,” she says. “Like last week, we watched To All The Boys I’ve Loved, which is a Netflix movie, but we read the books and I had pizza and we watched the movie. It garnered some excitement.”

Jones wasn’t aware they had chosen another movie-bound book last year when they selected The Hate U Give. It was on the New York Times best seller list for young adult fiction, and its subject matter was painfully relevant. The Hate U Give is told from the perspective of a 16-year-old black girl who sees her best friend killed by a white police officer, then learns to speak out as the sole witness to his death.

Author Angie Thomas packed 450 pages with subplots like interracial dating, how to handle that friend whose jokes just happen to be racist, what it feels like to constantly code-switch, and what it means when a family leaves a traditionally black neighborhood to move to the suburbs. She also adds sprinkles of humor every few pages, like when the lead characters pause during an especially tense situation to argue about whether mac-and-cheese is a side dish or a full meal. 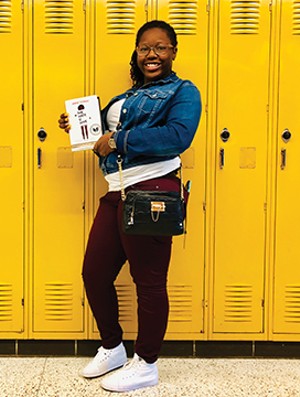 Photo by Dusty Rhodes / NPR Illinois
QwaDimeyion Perry.
Still, the name of the book – and the movie – forms the acronym THUG. The phrase was popularized by the rapper Tupac Shakur.

“You know, he had THUG LIFE tattooed across his stomach,” Jones says. “And he said that THUG LIFE is The Hate U Give Little Infants F***s Everyone. Meaning that if you treat a group of people badly since the time they were born, they’re going to mess up society, and there’s going to be issues, and you’re going to pay for it later. That’s THUG LIFE.”

Jones found out The Hate U Give had been made into a movie when Southeast alums started emailing her.

“Old students just sent me the link and ‘Have you seen the trailer?’ because I’d been pushing the book for so long,” she says. “They were really excited, and I knew I had to do something with this.”

What she decided to do was to go beyond her book club and promise to take every Southeast student who read the book to see the movie in a theater. In order to make it as accessible as possible, she wanted to have the book available for every student who might want to read it. The school librarian had fewer than 10 copies. Jones herself had 20. She knew she needed more.

“So I just kind of threw it up on Facebook,” she says. From there, her post was shared and re-shared. “And people started sending books to Southeast. And I don’t know who sent them. They didn’t even have addresses attached. I would say that we had at least 75 copies donated, and every one of those copies was passed out to a kid.”

One book went to QwaDimeyion Perry. As a senior, she didn’t need to read this book for a class; she told me she was reading it just for fun, inspired by seeing the movie trailer.

“Reading’s not a big part of my life. I don’t like to read at all,” she told me. “I have to be really interested in something or I just won’t read it.”

She finished it a few hours before boarding the bus to the theater.

Another book went to ninth-grader Faith Bondon, who, like QwaDimeyion, says she isn’t usually interested in reading. But she sped through The Hate U Give in two weeks. Part of what kept her from tossing the book aside was the author’s pitch-perfect use of teen slang – a talent rarely found in full-fledged adults. 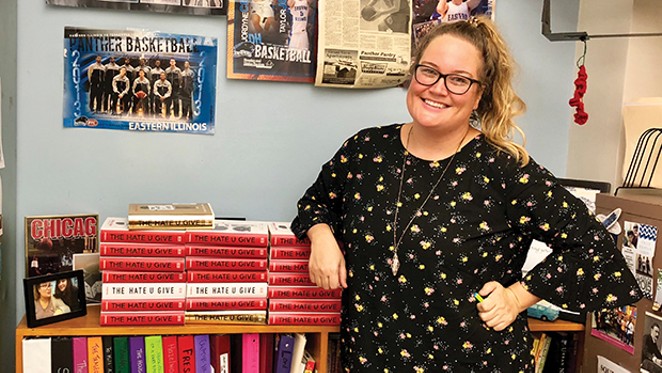 Photo by Dusty Rhodes / NPR Illinois
Kassie Jones.
“I think she really did good. Like, if my parents were to try to do it, I’d be like ‘STOP!’ But like for her, I don’t know, it’s like she’s in our century but just older. She knew exactly where to use it and how to use it in the right way.”

Faith and QwaDimeyion are both black, but Jones says white students came asking for the book too.

And one copy went to a student who just needed something to read to keep him from annoying his science teacher.

“His science teacher emailed me and said, ‘You’ve got to give Sean a book. He keeps finishing early and he keeps just talking. You’ve got to give him a book,’” Jones says. “So I put this on his desk. He said, ‘There’s no way I’m reading a 400-page book!’”

The next day, 14-year-old Sean Skenandore told Jones he was on page 140, having stayed up till midnight reading the first three chapters aloud, over the phone, to his girlfriend.

“It usually takes me like two months to read a book,” Sean told me. He prefers to play video games. He read The Hate U Give in about a week.

This story originally appeared on NPRillinois.org, where Dusty Rhodes is the Education Desk reporter.