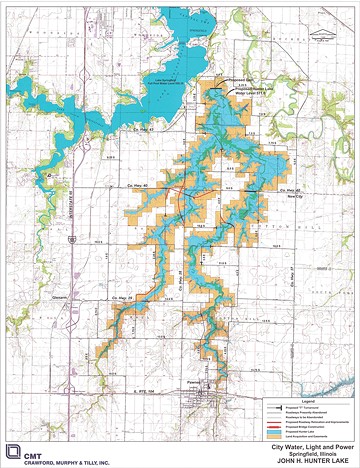 The more than 40-year saga of the proposed "Hunter Lake" continues, with the city of Springfield now arguing for the lake to be used not just as a supplemental water source, but as a means of more lakeside recreation. As it has since the project began long ago, the proposal also faces criticism from detractors.

Springfield has planned, studied and debated the creation of the proposed 3,000-acre lake since long before it applied for a 1989 permit with the federal Army Corps of Engineers, which kicked off decades of environmental studies, public comment periods and more studies.

At issue is whether the Corps of Engineers will approve a permit for the lake to be created, a determination made after a cost-to-benefit analysis is made. The first official mention of the lake's use for recreation came nearly 30 years after that first application, when the city – in late 2018 – asked the Army Corps of Engineers to add recreation to the goals of the project. This, in turn, has necessitated an additional study to determine the proposed lake's suitability for recreation. In February 2020 the city council approved funding for the University of Illinois at Urbana-Champaign to perform the study.

The addition of recreation as a goal of the lake project also opened another period of public comment in late July this year. Prairie Rivers Network (PRN), a Champaign-based environmental group, recently provided public comments to the Corps of Engineers detailing several concerns it has with the validity of data being used to support the creation of the lake.

"Our main concern at this point is that, despite the best efforts of [Army Corps of Engineers] and its third-party contractor, many results and conclusions from those source documents ... are being incorporated into the [environmental impact statement] without sufficient scrutiny," PRN wrote in a July 30 email to the Corps' regulatory division.

PRN pointed out, among other concerns, that a number of studies used in the initial environmental impact study date from the 1990s, contain errors, or may otherwise be biased in favor of Hunter Lake and against alternatives to its creation. Don Hanrahan, a Springfield lawyer with Citizens for Sensible Water Use, a longtime opponent to the creation of the lake, also submitted public comment to the Army Corps of Engineers in late July that, among other things, called into question the usefulness of Hunter Lake as a means of providing any meaningful recreational lake space that the area currently lacks.

Hanrahan's comment to the Corps cited a city survey of people who use or want to use the lake for recreational purposes, which Hanrahan said fails to make the case for another lake. More than 60% of the U of I study's respondents indicated they were "satisfied" or "very satisfied" with available aquatic recreation options, and the most common response to questions about what factors prevent people from engaging in water recreation activities was not having enough time.

"The study does not show that a third lake within 15 miles of two existing lakes would affect the majority of the survey respondents whose needs cannot be met except by increasing their interest, improving their health, increasing their available time, or providing equipment they lack," his email read. Springfield Mayor Jim Langfelder argued the study shows that the Springfield area would benefit from the addition of the recreation provided by Hunter Lake, and that adding it would also preserve the viability of Lake Springfield.

Opponents have also renewed their arguments calling into question as well the lake's necessity as a water supplement. Don Davis, another longtime opponent, argued in his comments to the Corps of Engineers that the planned closure of three of CWLP's coal-fired power plants would reduce water use by about 10.9 million gallons per day. Hunter Lake's creation would provide about 12 million gallons per day.

"Reducing leakage in the distribution system, enacting a water conservation rate structure and dredging the phosphorus-laden sediment out of Lake Springfield to comply with EPA water quality standards in total would certainly make up for a 1.1 million gallon per day deficit," Davis wrote.

Langfelder said increasing the city's water supply is important in light of requests smaller municipalities have made of the city's water infrastructure, and also to prepare for the future.

"The resource of the future is going to be water. When you look at economic development, or sustainability or resiliency, water is going to be the driving factor," Langfelder said.

Having provided the recreational study, Langfelder said the city awaits further direction from the Army Corps of Engineers on the project.

What to do about rent