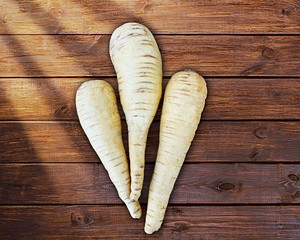 A fall frost warning announces the end of the road for most of the garden vegetables we've enjoyed over the summer. Happily, there are a few vegetables that reach their pinnacle of deliciousness when the cold weather arrives. Winter sweetening is a phenomenon that enhances the flavor of cole crops such as kale, collards and Brussels sprouts, along with root vegetables such as carrots, turnips, beets and parsnips.

Over the course of the growing season, these vegetables store up energy in the form of starches. When the temperatures start to drop, these starches are converted into sugars, which act as a natural antifreeze. Winter sweetening is especially profound with the humble, underappreciated parsnip.

I have to confess that I had never tasted a parsnip until about 10 years ago. Growing up, they just weren't a vegetable that showed up on my family's dinner table. During high school I worked in the produce department of our local grocery store, so I knew what they were, and we always kept parsnips in stock, but never really sold too many of them.

Parsnips look like large, beige-colored carrots, and indeed, they are a relative of the carrot. In their raw state, parsnips are almost inedible, but when cooked, they develop maximum flavor and sweetness. As a side dish, the sweetness of parsnips can offset bitter greens such as rapini. When caramelized, they become so sweet that they can even be used as a component in desserts.

Before the introduction of potatoes from the New World, parsnips were the main starch of choice in Europe. And when honey was scarce and before sugar became widely available, Europeans used parsnips to sweeten cakes and puddings. Parsnips ferment easily and were once used to make beer and wine.

When shopping for parsnips, look for ones that are medium-sized with a smooth skin. After peeling, small parsnips won't give you much to eat, and large parsnips have woody cores that need to be removed. Prepare them like you would carrots: peel the skin, and trim off both ends.

Because parsnips are so much wider at the top than the bottom, you should cut them in half crosswise, and then cut the fatter part lengthwise into halves or quarters. Parsnips, like apples, will oxidize if you leave them exposed to the air too long. If you won't be cooking them right away, submerge them in a bowl of water acidified with a little lemon juice or apple cider vinegar. If you will be steaming the parsnips, you don't need to peel them first. After they cool a bit, the skin will slip right off.

These pancakes made me fall in love with parsnips. Serve them with applesauce or as an accompaniment for roasts.

Place the onion and parsnips into a mixing bowl, add the egg and mix. Add the flour and just stir until blended. Add the salt, pepper and nutmeg.

Heat the olive oil in a large skillet over medium heat. Drop enough parsnip mixture into the pan to form 3-inch pancakes. Gently flatten with a spatula. (You may need to cook in batches.) Cook for 6-7 minutes per side, until golden. Transfer to paper towels to drain. Keep warm in a 200°F oven until ready to serve.

Great as a base for a roasted chicken or a hearty steak, or as a side all its own.

In a saucepan over medium heat, melt 1 tablespoon of the butter. Add the onion, and season with a pinch of kosher salt. Lower the heat and slowly cook the onion, stirring occasionally, until translucent, about 5 minutes.

Add the parsnips and cook for another 5 minutes. Add the chicken stock and cream, bring to a simmer, and cook until the parsnips are soft and tender, about 20 minutes.

Transfer to a blender, cover with a towel and puree on high speed. With the blender still running, add the remaining tablespoon of cold butter and the lemon juice. Season with salt to taste.

with Guts: A Cookbook by Peter Meehan

Place the butter in the bowl of a stand mixer with a paddle attachment and beat on medium-high until fluffy.

Add the cream cheese and beat until fluffy

Add the sugar, orange zest and salt and beat for 5 more minutes

Whisk together the eggs, sugar, oil, milk, salt and vanilla in a large bowl until smooth.

Stir in the flour, baking powder, cinnamon, nutmeg, allspice and ground cloves and whisk together until smooth. Fold in the parsnips and ginger.

Pour the batter into the greased pan. Bake on the middle rack of the oven until a toothpick inserted into the center of the cake comes out clean, about 20-25 minutes.

Cool for 10 minutes, then remove from the pan and cool completely on a rack before frosting.