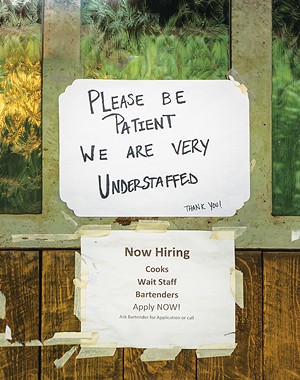 In early 2020, Nick Kokanas saw the coronavirus catastrophe coming way before the rest of us did. Kokonas is the founder of Tock, an online reservation platform utilized by many high-end restaurants around the world. While looking at Tock data coming in from his 50 restaurant clients in Hong Kong, "we saw reservations go near zero." Shortly later he saw the same thing happening in Seattle, and knew trouble was coming.

The coronavirus pandemic dealt a death blow to many independent restaurants, and the restaurant world has been forever changed. Chef Rene Redzepi of Noma, a Michelin 3-starred restaurant in Copenhagen, summed it up this way: "It's an industry that's under copious amounts of pressure. We deal with poor profit margins, low incomes, people are overworked, they're underpaid, there's bad management. A lot of it is a result of there's simply no money in the industry. People can't afford to maneuver any new way they want. And we don't have any business training either."

Chef Edward Lee owns several restaurants in Louisville and is the author of an award-winning book, Buttermilk Graffiti. In December 2020 he wrote in Bon Appetit: "We're trying our best to keep everyone hopeful, but at the end of the day, it feels like piling sandbags against the tsunami." He predicted: "This is the end of the independent restaurant era, and I don't know any chef who feels hopeful right now." Eight months later he was feeling a bit more optimistic: "What the pandemic did was give everyone time to reflect. You don't fix the system overnight. I do hope that the other side of this is a restaurant industry that's kinder, more activist, more worker-friendly, more sympathetic, and more about truly a community. It's going to be challenging, but the restaurant industry is always met with challenges. We'll meet this one, too."

Gavin Kaysen owns several restaurants in Minneapolis and was the recipient of the 2018 James Beard Award for Best Chef: Midwest. "I'm sort of an optimist. I believe things are going to get better. I think that the pandemic has forced us to understand what the pitfalls were in our business. The difficulty is that what we do is art more than commerce. I think the majority of chefs are artists, so their minds are geared towards that."

"Healthy" profit margins for restaurants typically run between 8% and 10%. Many high-end restaurants, such as Noma, are shockingly lower... as low as 3%. Kaysen feels that "there will always be that class of independent restaurant where the profit margins are low. This is because of the difficulty we have in our country pricing out what the value of food really is. We're afraid that if we price it out for what it is really worth, we're going to lose the customer or guest." Since the start of the pandemic fast-food menu prices have gone up 6.2%, but prices at independent full-service restaurants have risen by less than 3%.

Kaysen feels that "restaurants should have learned how to diversify themselves." Many restaurants stayed afloat during the pandemic by adding retail sales to improve their bottom line. After they shuttered Springfield's American Harvest, Jordan and Aurora Coffey reemerged with Luminary Kitchen & Provisions, offering "a house charcuterie program, an in-house butcher shop and a provisions counter full of local goods." Curate, a Spanish tapas bar/restaurant in Asheville, North Carolina, offers a full line of Spanish food products.

In an interview with Bloomberg, Rene Redzepi stated: "We don't need restaurants to stay alive, but we need them to feel alive." Restaurants provide a sense of community through social interactions. During the time of the pandemic shutdown, Kaysen started "Chef GK at Home," online cooking classes which included an option of purchasing all the ingredients needed for preparing the meal. "For our first cooking class, we had 130 people on Zoom. By our third class we had over 1,000. It told us that this was a way for us to get out of our restaurant into the homes of people. And now we've seen it build a community of people. People who didn't even know each other before now rely on these cooking classes to get together, and they even Zoom together after their classes are over. What's interesting to me is that we ended up creating the same effect that a restaurant creates." Priced at $35 for the class and $85 for the ingredient kit, it has become a very profitable alternative revenue stream.

When restaurants were able to start reopening, they were faced with yet another crisis... a labor shortage. Kaysen says: "I think a lot of people left the business for good. I think that people who were part of the grind for a long time took a step back and thought: 'It's not what I want to do or it's not worth it.' I think a lot of people found themselves, sadly, more disposable than they thought they were, and if you're getting paid $15 an hour and the restaurant doesn't offer health insurance, or 401K or any benefits, getting laid off during two shutdowns really puts the nail in the coffin."

The Coffeys are experiencing the same phenomenon in Springfield. "Our biggest challenge has been finding and retaining staff. We were fortunate enough that eight of our previous employees from American Harvest made a commitment to work for us as soon as we opened. But we're still struggling to find enough staff to open permanently. We've been operating on a minimal restaurant schedule. Because of lack of staffing we still have not been able to open for dinner full time."

The solution to recruiting and retaining staff will involve transforming restaurant work from an industry into a profession with decent pay, good benefits and a positive, respectful work environment. Kaysen is "proud we do full benefit. I'm proud we do 401K." At Kaysen's restaurants, tipping has been replaced by a hospitality charge which is divided between everyone who has worked hard to put the meal in front of the guest. This can jump a $14 per hour cook's wage up to as much as $30 per hour.

A few years ago, after I retired from dentistry and began a new career as a chef, I was struck by how hard cooks had to work for so little pay. I posted a rant on Facebook supporting raising the minimum wage and was reamed by restaurant owners about the destructive impact that would have on their already low profit margins. As a former business owner, I get it. But something's gotta give. If restaurants have to offer higher compensation to get people to work in their kitchens, customers are going to have to pay a bit more for their meal.