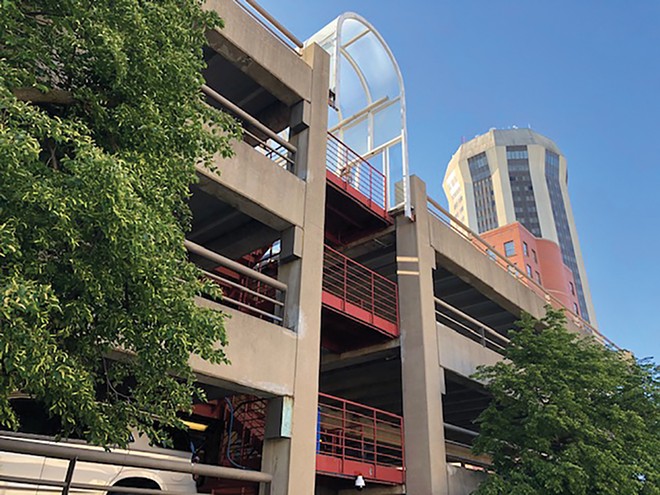 If you had asked cosmopolitan Springfieldians in 1990 or so to name the Springfield parking ramp designed by flamboyant German American architect Helmut Jahn, most would have pointed to the municipal ramp at Seventh and Monroe. As built in 1967, its louvered façade of precast concrete slats made it one of the handsomest structures of any kind in the capital.

They would have been wrong. The city ramp was the work of Springfield's Ferry & Henderson with Ralph Hahn and Associates. A block up Seventh Street is the one Jahn designed. Jahn – who died May 8 after running a stop sign in the Fox River valley (he was 81 and on a bicycle, a very Jahnian death) was a young partner in the 1970s at the Chicago firm of C.F. Murphy and Associates. He was tasked with the design of the parking ramp being built for the new convention center complex. The Springfield Metropolitan Exposition and Auditorium Authority had asked the developer of the adjacent hotel to give SMEAA more ramp than they had money for and also demanded design changes that left Jahn testily asking them why they hired a professional for the job if they didn't plan to listen to him. The result, as you can see today, ain't edifyin'.

You'd have thought that his Springfield experience would have put Jahn off public building projects in Illinois but he persisted. JB Pritzker said that what is now known as the Thompson Center in Chicago's Loop was a building "that never lived up to his creative genius," but in fact the state of Illinois never lived up to its responsibilities as a developer. Jahn's proposed main public library for Chicago was rejected by a competition jury that chose instead to spend $150 million on one of the worst major buildings in Chicago because it "looked more like a library." He was never going to get a chance to design the new state library, but we can regret he didn't live to submit a proposal for a new Stratton Building.