The encouragement of competent teachers

Would Elizabeth Graham be allowed to teach today? 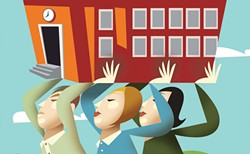 Reading Phil Bradley’s fine remembrance of Elizabeth Graham the other day (see “Before the university we had Elizabeth Graham,” April 9, 2015) I was moved to reflect again on teachers and teaching.

As Bradley recalls Miss Graham, she was the schoolmarm personified. Though long retired, she treated indifferent or unruly visitors to the Vachel Lindsay home as if they were naughty pupils in her class. Some found the experience annoying, some comical, but no one forgot it. It is to the city’s credit that she is not recalled today merely as an eccentric. Instead, she found local fame (a new school named after her and selection as a Copley First Citizen) for her part in preserving the house and memory of Springfield’s best poet.

Perhaps Miss Graham should also be remembered as a principled pedagogue. In 1958 she addressed local Unitarians on “The Selection, Retention, and Encouragement of Competent Teachers.” I would be interested to know what she said. The address came just after she publicly resigned her post after 39 years in protest of District 186’s insistence on teaching all children as if they are the same – a philosophy that is absurd in its assumptions and pernicious in its effects.

I suspect that today’s school board, no less than its 1950s predecessor, would have disagreed with Miss Graham about what makes a teacher competent. Her own approach, apparently, was distinctly old school: if you want to teach a kid what to write, he must read; to teach her how to write, she must write. “There were echoes of Miss Graham’s philosophy at Springfield [High School] when I went there,” Bradley tells us. “We read the classics, Beowulf, Shakespeare, Pilgrim’s Progress, the Aeneid and the Odyssey. And lots of poetry, especially Lindsay.” That echo had faded to a whisper by the time I was there, a mere four year later.

Teaching about writers and writing was only the means to more fundamental ends. Only the ignorant complain that poetry taught in school is of no use in our later lives. Reading poetry (or complex prose), trying to understand it in terms of the poet’s time and temperament and memorizing it stretches and strengthens the mind.

More important, Miss Graham sought to teach her pupils about themselves. The Tom Morgan (Class of ’44) mentioned by Bradley was one of Miss Graham’s favorite students at Springfield High and, later, her friend. (More about Morgan some other time.) Morgan’s novel, This Blessed Shore, was published in 1966. On a visit to Springfield to promote the book, Morgan explained to the Illinois State Journal that society tried to fit each child into a mold but the best teacher tries to makes him an individual by bringing out his “latent talents and sensibilities.” We’re probably safe in assuming that his decision to dedicate his book to Graham owed something to her having liberated his own talent.

Of course, talent and sensibilities often are very latent in a 16-year-old. But even when they are real, how does a teacher excite them? Teachers can be like magnets; if a student is made of the right kind of stuff, she will respond to the teacher’s mere presence; if she is not, there is no attraction, even repulsion, if the teacher tries to draw too close. Teachers can no more inculcate a passion in the young than a magnet can turn brass to iron. But the simple presence of a teacher who has committed herself to words and shares her belief in their value valorizes the child’s own impulses toward words and reading.

Back then a kid needed to have a solid secondary education to get into college; today, it rather helps if she doesn’t have that. Glancing at descriptions of courses on offer at today’s SHS, I see some Shakespeare and a little Beowulf along with much teaching about how to write in the academic style and literature as a means “to give students a greater appreciation for cultural differences around the world.” Isn’t that anthropology rather than literature? And shouldn’t that be “of” cultural differences instead of “for”?

Miss Graham would probably scorn recent changes in the English curriculum, but those would be the least of her complaints. For example, I am confident that Miss Graham would scorn today’s therapeutic pedagogy. “There was no concern for ‘self-esteem,’” Bradley recalls of her class. “Produce, you got the grade you earned. Fail, you got an ‘F.’” I would bet that Miss Graham believed that self-esteem – real self-esteem – is not bestowed by praise but earned, by working hard enough to get an A.

A young Miss Graham, confronted with the diktat to teach to the test, to tailor an English curriculum to college entrance requirements, to put literature in service to diversity goals, would …well, she would probably do what uncounted Grahams have done – change jobs rather than devote themselves to such a dubious enterprise. She would not make an issue of it as she did in 1957, knowing that neither the school board nor the district’s parents would care.