PHOTO BY MARIA GARDNER.
Alyce Lyle, overseeing the coat drive. She organizes events like this because that’s how she was raised: “My mom and dad gave a hand to anybody who went down the dusty road in Tennessee.”

During the brisk morning, a visitor held up a coat wondering if the item would be a good fit. Sherrie Henderson said the coat and blanket drive held by Freedom in Holiness Mission on Loveland Avenue is convenient because it occurs right before winter arrives.

"They wash everything and there are no bugs," Henderson said. A regular visitor to the event held every fall, she said it's helped her save money over the years when clothing several of her children.

Over 200 coats of all styles and sizes, winter gear and blankets were available for people to take as needed at the event. The lady in charge sat on the front porch of the Mission, which gave her an overview of the scene – visitors browsing through the various blankets and quilts, while volunteers, wearing masks, held off the wind from blowing items away.

Alyce Lyle said she began organizing this event in1992 because it's what she has known all her life. "My mom and dad gave a hand to anybody who went down the dusty road in Tennessee," Lyle said. She grew up in the South in Clarksville, 50 miles northwest of Nashville, in a log cabin on a sharecropper farm where her family resided for generations, raising mainly tobacco.

The seventh out of 12 children, she remembers helping her mother stuff cotton inside sewn squares to make quilts. And yet, she recalls there were cold nights, and sometimes not enough cover to go around.

A retired schoolteacher, or educator, as Lyle prefers to be known, she dedicates herself to organizing community programs such as tutoring, an Easter basket and New Year's food basket giveaway. These events take place on the east side of Springfield throughout the year.

On Dec. 4, the Mission will host board game tournaments for children from 3 to 16 years old at Lincoln Library from 11-2:30 p.m.

Lyle's long-term project is the development of an outside photo gallery of east side residents. She said negative news reports of this part of the city have not put her neighborhood in a good light. "They made the east side sound so ugly," she said.

Lyle recalled asking herself, "What can I put over here to give people a better attitude about the east side? And, what can I do to include the people of the east side in a project on this lot?" With this venture, she aims to give east side residents an opportunity to collectively create another beautification project on the block and project another view of the neighborhood for the rest of the city to see.

Her vision entails seven billboards sized eight feet wide by four feet tall, standing five and a half feet off the ground, spread out over a path on a plot of land she's owned for several years. Each billboard she plans to be double-sided containing 200 pictures. She has the plot of land fenced, but still needs a permit to install the parking lot. A city official, she said, has completely ignored her requests for specification requirements, while finding time to reach out to the architects and paving contractors she's hired.

Lyle said she's knocked on countless doors, but has not received any funding for this project. She said a bank has pledged support, but declined to say how much they committed. She said $12,000 from her savings could pay for the parking lot, but her daughter cautions her against using that.

Meanwhile, Lyle is accepting pictures for the project. She'll require individuals to sign consent forms, giving their consent to participate.

Mary Palmer, one of the volunteers, sat quite photogenic as she handed visitors large bags to put their items in during the coat and blanket giveaway. Palmer, a retired nursing assistant, has been volunteering with the Mission for six years. She said Lyle is a hard worker, kind, and generous, who knows exactly what she wants. "You have to learn her, just like we all have to learn each other," she said.

Lyle already has selected her photo for the gallery. In the picture, she has in her left hand a hoe and in her right a batch full of peanuts, just pulled out of the ground, proudly showing the fruits of her labor. Pictures of any size or donations can be dropped off at the Freedom in Holiness Mission, a registered 501c3, located at 1430 Loveland Ave. in Springfield. For more information, call Alyce Lyle at 217-522-2527.

Maria Gardner is a graduate student with the Public Affairs Reporting program based at University of Illinois Springfield. 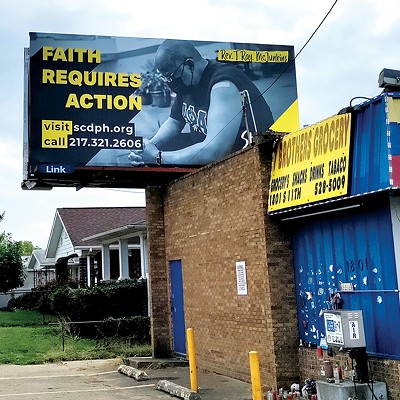