You'll recognize the places, and some people 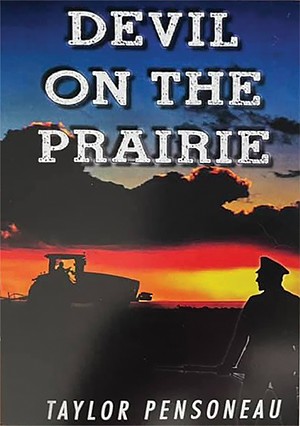 Devil on the Prairie, by Taylor Pensoneau, 2020, 264 pages, $18.95. Self-published by Downstate Publications, Inc., 427 Lexington Court, New Berlin, IL 62670. downstatepublications@mchsi.com.
Jake Brosky, the crack detective for the St. Louis World, is back in Taylor Pensoneau's third novel, Devil on the Prairie. Set primarily in Illinois, this is the third novel in Pensoneau's trilogy. The fictional story is infused with historical events and actual places from small towns in Illinois to the streets of Paris, hotels in Madrid and the Italian countryside. Pensoneau, of New Berlin, says his literary style is to bring in people and events to give his stories a sense of reality and authenticity. The real people and places woven into his stories are never in a negative context. The main characters and protagonists, and places described in a negative manner, are all made up.

In Devil on the Prairie, a Nazi officer who was at Dachau has made a new life in southern Illinois working for the KH Tractor company. Someone in Illinois recognizes him from a stint during the war and later ends up dead, reportedly by suicide. Unconvinced, Brosky sets about to uncover what happened and why.

The Sangamo Club, Lake Club, Old Lux and the Mill are familiar Springfield places with references in the story. Mother Jones, Toulouse-Lautrec and Ernest Hemingway are just a few of the diverse characters that make it into Pensoneau's latest novel. The Spanish Civil War and coal mine fatalities and labor issues are examples of the range of historical events referenced in the story. Settings and establishments are reflections on places Pensoneau has visited. For example, when the Nazi officer meets his girlfriend in Italy, the scenes and locations are based on Pensoneau's own travels.

Some characters from the first two books – Summer of '50 and Falling Star – find their way into Devil on the Prairie, such as the blond bombshell from southern Illinois, a former Illinois governor who is now president and a gangster from southern Illinois. Astute readers will guess who Pensoneau had in mind when describing the fictional Illinois governor, Elijah Sanderson, and the fictional gangster, Harry Fontaine.

While Falling Star left the reader a bit uncertain about the outcome, there is closure to the story in Devil on the Prairie. Although this is the end of the trilogy, Jake Brosky isn't finished. He will make another appearance in Pensoneau's next work of fiction which he is currently writing. The working title is Corruption Incorporated, fictionalized stories about his own investigations when he was a reporter. Pensoneau is a former Illinois political writer for the St. Louis Post-Dispatch and former president of the Illinois Coal Association. These experiences are evident in all of Pensoneau's novels.

Pensoneau, 80, is the author of numerous nonfiction books including biographies on former governors Dan Walker and Richard Ogilvie and books about downstate gangsters. He has no intention of writing another nonfiction book. Pensoneau says it is so much easier to write fiction than nonfiction. Nonfiction requires a different level of responsibility to be precise and play it straight, conducting interviews, researching archives and traveling. Pensoneau says writing fiction "lets my imagination run wild. It's just fun."

Pensoneau will be signing books at Capone's Hideout in New Berlin on Sunday, Sept. 19, 12:30-3 p.m. Devil on the Prairie is available at Books on the Square in Virden and Springfield or downstatepublications@mchsi.com.

Karen Ackerman Witter first met Taylor Pensoneau when she was director of the Illinois Department of Energy and Natural Resources and Pensoneau worked for the Illinois Coal Association. She previously wrote a review of Falling Star for Illinois Times.