The debate over Salade Nicoise

Anchovies or tuna? Fresh tuna or canned? Mixed or layered? 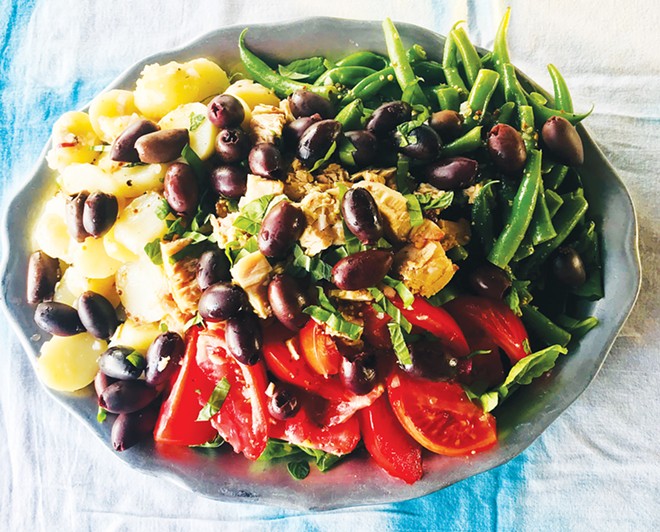 Back in the days when I was still a dentist, after giving an injection and waiting for anesthesia to kick in, I'd have an opportunity to chat with my patients for a bit. Karen, one of my longtime patients, knowing of my interest in food and cooking, told me about her recent trip to NYC and her meal at Les Halles, the restaurant that Anthony Bourdain worked at before he became a celebrity. She ordered the Salade Niçoise and told me that she was extremely surprised that she had been offered a choice between fresh, grilled tuna or canned tuna. With a voice beginning to slur from the anesthesia, she exclaimed: "Of course I chose the fresh."

As I readied my drill in preparation for her "procedure" I commented: "Canned tuna is actually more traditional." By this point, she had two pairs of hands in her mouth and she could only raise her eyebrows in surprise.

Salade Niçoise is a composed salad that first appeared in French menus in the latter part of the 19th century. Originating in the seaside city of Nice on the French Riviera, in its original form it featured only tomatoes, canned anchovies and local olive oil. Over the years ingredients were added and components were changed. Auguste Escoffier's version swapped out oil-packed canned tuna for the anchovies. Historical purists now insist that Salade Niçoise can be made with either anchovies or tuna – but not both. Escoffier replaced the traditional olive oil dressing with the flavored oil from the tuna can. Later versions of Salade Niçoise are typically dressed with a vinaigrette. Larousse Gastronomique calls for equal parts of diced potatoes and green beans dressed in oil and vinegar and garnished with anchovies, olives, capers and quartered tomatoes. Most modern versions include pitted Nicoise olives and hard-boiled eggs. Traditional versions did not include any leafy greens; modern versions often include lettuce or arugula. Julia Child's version from Mastering the Art of French Cooking starts by lining the platter with lettuce. Julia specified canned tuna. Alice Waters of Berkeley's Chez Panisse prefers grilled, fresh tuna. Julia Child liked to dress all the ingredients individually in the vinaigrette, and compose each component artistically on the plate. She wrote: "I've seen people swish everything together, and it just looks like hell."

My patient Karen's consternation that a fancy Manhattan French restaurant would be offering canned tuna is based on the experience with the canned tuna that most of us grew up with here in the States. In this country, canned tuna may not be considered prestigious, but in Europe, especially in Spain, canned (or jarred) tuna is highly respected. Grocery stores often devote a whole aisle to canned fish.

The best canned tuna comes from the Ortiz family in the Basque region of Spain. They are a fifth-generation fishing family that has been canning the best tuna and anchovies available. Though pricier than our familiar Charlie Tuna, the flavor and textural difference is remarkable. Ortiz purchases only line-caught tuna on a daily basis from local fishermen and prepares it for canning totally by hand the same way they've done it for generations. Like wine and good cheese, their canned tuna and anchovies actually improve with age, becoming richer and more flavorful, reaching a peak at 14 or 15 years. The oil gradually penetrates the flesh further and further as it ages, making for ever richer fish inside. Zingerman's in Ann Arbor, one of the nation's most respected purveyors of fine foods, purchases whole pallet-loads of canned tuna from Ortiz and "cellars" it for future enjoyment.

Pan Bagnat is the sandwich version of the Salade Niçoise. Traditionally it was a portable meal for fishermen and farmhands Pan Bagnat means "bathed bread," because the dressing soaks into the bread. It is best made several hours ahead and compressed under a weight to meld all the ingredients. Its preparation will be discussed in a future column.

Ari Weinzweig is the co-founder and CEO of Zingerman's and has traveled extensively throughout Europe sourcing the finest food products. When asked about the Salade Niçoise and Pan Bagnat, he said: "They're both classics. I wish I was on the beach right now so I could order one. They're both great uses of local vegetables and fish – classic Meditteranean diet, both tasting good and good for you."

In a small bowl, whisk together the vinegar, salt, pepper and mustard. Slowly whisk in the reserved olive oil from the canned tuna.

In a large pot, bring water to a boil and prepare an ice bath. Add a generous amount of salt to the boiling water. It should taste quite salty- like sea water.

Add the green beans and potatoes to the pot and cook until just crisp-tender, about 2 minutes for the beans and 12-15 minutes for the potatoes. Lift out with tongs or a strainer and plunge into the ice bath to stop the cooking process. Drain and allow to cool.

When potatoes are cool enough to handle, peel and slice thickly. Combine the shallots with about 3 tablespoons of the vinaigrette and gently dress the warm potatoes.

In a separate bowl, coat the beans with about 2 tablespoons of the vinaigrette.

In another bowl, gently toss the tomatoes with another 2 tablespoons of the vinaigrette.

Layer a serving platter with the greens. Arrange the green beans, potatoes, and tomatoes decoratively over the greens. Top with the tuna, and olives. Drizzle with the remaining vinaigrette and top with the herbs. Garnish with the hard-boiled eggs. Season with freshly ground black pepper.

Bertha Bus has been encamped next to the smokers behind Zingerman's Roadhouse in Ann Arbor for over a month. The bus is starting to smell like a smokehouse.