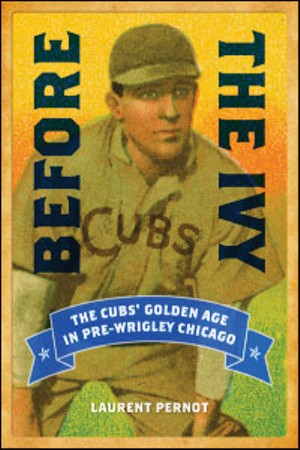 Pernot’s fascinating baseball anecdotes actually predate the birth of the Cubs. He notes that there is evidence of organized baseball being played in Chicago by the mid-1850s. An undated news article from that era describes a game that some believe was between staffers supporting Abraham Lincoln and Stephen Douglas. The news item is headlined “The Political Baseball Match” and refers to a game played on the grounds of Excelsior Baseball Club on Chicago’s near west side. While the article’s lack of date makes it impossible to connect to either the 1858 Senate campaign or the 1860 presidential race, baseball fever and politics had come together in Illinois.

The Civil War impeded the growth of baseball, but in 1871 for a $10 fee the Chicago White Stockings joined the National Association of Professional Baseball Players. Nine teams were part of the league and the White Stockings played their games at Lake Park at the corner of Randolph and Michigan Avenue, now the location of Millennium Park. The team was in first place in early October of that season when the Chicago Fire burned down their stadium and all of their equipment. The White Stockings finished the season in Brooklyn, New York, playing their remaining games in borrowed uniforms.

A great portion of Before the Ivy discusses the players who were pioneers of early professional baseball. There were no agents, multiyear or multimillion-dollar contracts. Players scrounged to make a living. One player, a speedy outfielder for the White Stockings, would give up baseball after a few years to become a preacher. Apparently young Billy Sunday found the Lord during a game against Detroit when he sought divine assistance to catch a game-ending fly ball. As a preacher, Sunday earned $7,000 a month, 10 times his baseball salary. Baseball imagery filled his sermons. Sinners, he remarked are “dying on second and third base Lord and we don’t want that.” Righteous souls, Sunday observed, would be able to just “slide into heaven.”

By the early 1900s the White Stockings had fallen on difficult times. Many players had defected to the rival American League and the White Stockings were now known as the Colts. But soon the Chicago Daily News would refer to the team in its stories as the Cubs. The name took hold as the team’s record on the field also improved. Three players on the Cubs team of that era – Johnny Evers, Joe Tinker and Frank Chance – are immortalized in baseball history. In 1910 a New York World columnist would write a baseball article that lives today. “These are the saddest of possible words,” he wrote, “Tinkers to Evers to Chance.” The double-play combination was immortalized in baseball lore but in reality they accounted for only 56 double plays in 4 seasons. The three men were inducted together into the Hall of Fame in 1946.

This is a glorious book. Cubs fans, notorious for their optimism, are sensing a rebirth on the north side of Chicago. “Next year” has finally arrived and one can only imagine how Cubs fans will react if their long dream of a World Series comes to fruition. But they still have time to revel in some past glories and Before the Ivy is a great place for them to start.

A lifelong baseball fan, Stuart Shiffman is a frequent contributor to the Illinois Times book section.

Stuart Shiffman is an associate circuit judge in Springfield. He is a member of the American Bar Association Gavel Awards Committee, Scribes — The American Society of Writers on Legal Subjects, and a frequent contributor to Judicature Magazine and Bookreporter.com.
Read More about Stuart Shiffman