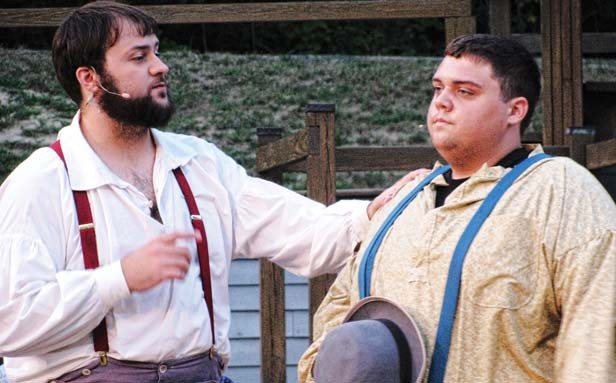 Levi (Kyle Harvey) and Will (Garth Whitehead) discuss enlisting in the Army of the Ohio.

The stories we tell and the songs we sing help us make sense of the past, understand the present and build the future. Civil War Journeys, which opened last weekend at New Salem’s Theatre in the Park and continues its run July 19-22, is not an action-packed drama and it is not a lighthearted musical. It is a story of the American people, told through narrative and song, finding a way through a time of deep national division.

After directing John Brown’s Body several years ago, director John Woodruff of Pleasant Plains was inspired to search for a balanced approach to telling the stories of ordinary people living through an extraordinarily difficult Civil War. With Civil War Journeys, Woodruff uses original dramatic vignettes combined with 19th-century music to explore the impact of the War Between the States on the lives of four “ordinary” men and their families.

First, there is Rafe, a slave planning to follow the stars to freedom, and Bess, the woman he leaves behind. Next is Levi, an Ohio farmer who, over the objections of his wife, Sarah, joins his friend, Will, a schoolteacher quietly in love with Elizabeth, to enlist in the Union Army. And, finally, there is Zeke, an unscrupulous merchant taking advantage of economic opportunities and the kind-hearted Effie.

As the war goes on, each family must face the consequences, some dire, of the decisions they make in the early days of the war. Rafe runs the risk of capture. Bess faces sale to another slaveholder. Levi and Will must endure the hardships of the battlefield, while Sarah and Elizabeth wait anxiously for their return. Zeke and Effie must eventually face the challenges brought on by Zeke’s business practices. 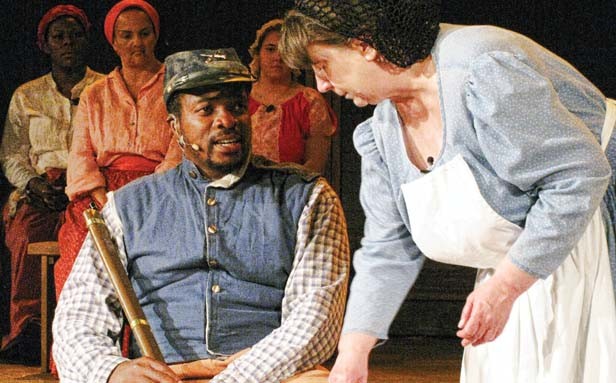 Civil War Journeys touches upon some of the cruelties of slavery and the harsh realities of war. Woodruff’s vignettes are built around the instability African-Americans experienced as a result of slavery and the war itself, while his military vignettes are constructed around the history of two devastating campaigns, the Battle of Shiloh in Tennessee and the Battle of the Crater near Petersburg, Va.

Told in a “concert” style, with minimal props and no battle scenes, Civil War Journeys, depends on cast performance, music, dialogue and costuming to carry the story. The ability of lead actors to transition from the chorus to center stage is critical to the success of the play. Although more experienced performers like Kyle Harvey and Elizabeth Buttell-Landis stand out, it is hard to find fault with any performance. Each cast member offers a good interpretation of a believable character.

The work of musical director Cindy Funer and conductor Adam Power are apparent in the cast’s superb choral and solo performances of original works and traditional songs. Debi Iams’ attention to detail is apparent in costumes that keep the chorus looking crisp and clean while slaves and soldiers are a little rough around the edges.

Civil War Journeys continues July 19-22. For ticket information contact Theatre in the Park at 217-632-5440 or online at http://www.theatreinthepark.net/show-civil-war-journeys.html.