The making of a movie classi 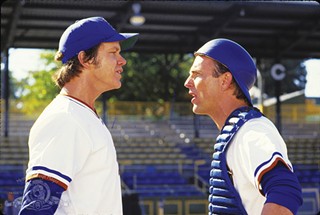 "I've tried them all, I really have. And the only church that truly feeds the soul, day in and day out, is the church of baseball." Annie Savoy in Bull Durham.

Ask any fan to name their favorite baseball movies and the 1988 classic Bull Durham is probably on the list. Baseball films come in many different forms. Field of Dreams, was based upon a short story written by Canadian author W.P. Kinsella. The original title was Shoeless Joe Comes to Iowa. The Pride of the Yankees, starring Gary Cooper, was a 1942 film biography of Lou Gehrig who had died from ALS in 1941. Baseball great Babe Ruth played himself in the film.

Baseball-themed films make up a substantial slice of sports cinema. The list includes Major League, The Sandlot, A League of Their Own, Fever Pitch (based on an English football novel), biographies of Roger Maris and Jackie Robinson, and my all-time favorite, Bang the Drum Slowly.  I know I have missed a few. Feel free to tell me the next time you see me.

Bull Durham is somewhat unique as a baseball movie. The baseball scenes are few and far between. More action is filmed in the locker room and team bus than on the field. A substantial number of scenes take place in the bedroom and home of Annie Savoy, portrayed by Susan Sarandon. Depending upon your point of view, Bull Durham is a story about America's national pastime. Whether that is baseball or sex I will leave to others.

For Ron Shelton, Bull Durham was the quintessential example of the adage, "write what you know." Shelton played minor league baseball for several years in the Baltimore Orioles organization. His career mirrored that of the film's character, Crash Davis, portrayed by Kevin Costner, a decent player lacking that final bit of skill and luck to make it to the major leagues. Crash did make it to the Major Leagues for 21 days. On a bus road trip with his teammates, he wistfully recalls the joy of being in "The Show."

The Church of Baseball opens with several chapters of autobiographical material about Shelton's life. A great deal of the author's personal baseball experiences found their way into the Bull Durham screenplay. Ron Shelton wanted to write a baseball movie and he pitched to Hollywood producers a baseball version of the Greek comedy Lysistrata. His final product was nominated for an Academy Award for Best Original Screenplay, losing out to the Dustin Hoffman, Tom Cruise film Rain Man.

The Church of Baseball chronologically tells the story of Bull Durham from the pages of a screenplay to eventual production as a movie. Of course, there were a myriad of steps along the way, including selling the screenplay, finding a studio for production, casting actors for the various roles, finding a location for shooting the film and finally creating an oeuvre that makes Bull Durham part of baseball lore.

But Shelton has far more than just the story of a baseball film to tell readers. He details quite a bit about movie production and film making. His explanations are detailed but easy to understand. Additionally there are countless stories about the movie and cast itself. They begin with Shelton learning after the movie has gone into production that Crash Davis, the character he believed he created, was the name of an actual living former major league player. The real Davis had attended Duke University and served in the Navy during World War II. Prior to the war, Davis played three seasons for the Philadelphia Athletics. Learning that he still lived in North Carolina, Shelton met Davis during filming. It turned out to be an eventful meeting.

Shelton is also candid about the battles with the studio during filming of Bull Durham. There was displeasure with Tim Robbins, the third star of the film who plays the young pitcher "Nuke" LaLoosh. For several days there was a cross-country battle between Hollywood and North Carolina. Frayed tempers make filming more difficult and, as Shelton tells the story, his anguish is palpable.

Whether telling readers how the script came into being, how the movie found a studio, how the cast was selected or how it was finally filmed, The Church of Baseball is a storehouse of information and anecdotes and an overall entertaining story. Reading Ron Shelton is almost like having him in the room with you discussing his work while you laugh and reply with a few of your own favorite baseball anecdotes and movie memories. As Annie Savoy correctly or incorrectly quotes Walt Whitman, "I see great things in baseball. It's our game, the American game. It will repair our losses and be a blessing to us."