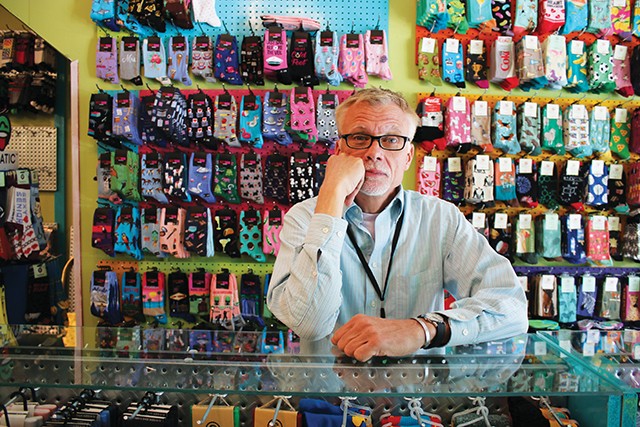 As is painted on the storefront window at 229 S. Sixth St., if you are looking for “cards, socks, or other fun sh*t,” The Cardologist is the place to be. Owner Doug Mayol, a Springfield native, has been an entrepreneur even before he was of legal age to work. As a kid, he would take his record player from house to house and dance to a song to earn a nickel. He still lives in the neighborhood where he grew up and loves it there.

Mayol has owned several businesses, which have had a number of evolutions, but now he is doing what he always wanted – running a card store.  At one time, he owned a store in Springfield and one at a resort in Lake of the Ozarks, Missouri. However, The Cardologist has been his mainstay for 31 years, as of September.  The Cardologist is home to hilarious socks, cards that will make you laugh out loud, Springfield memorabilia and other unique gifts that you will not find anywhere else.

As a customer once commented, “This is the coolest store of random crap.” And it’s true. Mayol agrees, “The inventory in The Cardologist is very freewheeling. It may not make sense to everyone who comes in, but it’s filled with things that make me laugh.” And that’s his mission, to make it fun on the customer side of the counter. He hopes to give his customers a laugh, or at least a smile.

Mayol never set out with a store concept, but rather “let it wander where it went,” and now it’s become a Springfield institution for something out of the ordinary. Although The Cardologist is filled with fun, Mayol said, “Retail has changed, and it’s harder than it looks, but I can’t imagine doing anything else.” He has the added bonus of sharing his days with his four-legged assistant, Jazz.

Mayol’s fundamental measure of success is being able to work for himself. He says it may not come with a retirement plan, but “I’ve done what I’ve wanted to do and at the end of each day that I’ve not worked for someone else, I consider it a success. I don’t regret it. You never know until you try.”