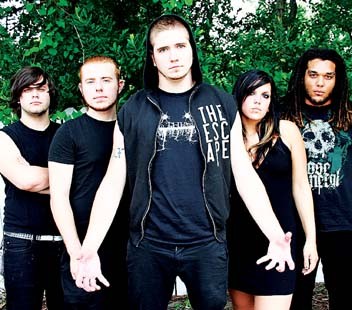 Hailing from a region of Connecticut and western Massachusetts called Connectivania by this six-member rock band, the group claims to “introduce elements of epic ambience and melody unseen by most bands in today’s realm of heavy music.” Relentless touring coupled with a penchant for the grandiose both musically and lyrically earned the group praise for performing “symphonic blackened death metal” and as a band “about to breakout in 2010” plus a deal with Candlelight Records.  Members John LaFreniere (vocals), Jordon Milner (guitars, vocals), Sara Loerlein (guitars, vocals), Jared Sloan (keyboards), Julian Parker (bass) and Nikolas Tormentahl (drums) finalized the band lineup in 2009 and are now relentlessly pushing the melodic boundaries of metal music with a concept recording entitled Odyssey: (Un) Dead released in Europe and the U.S. in March of 2010. The opus, based on “a single person’s journey down the path of exile” and “how love guides him to death” brings passion and insight to a blistering metal montage using female vocals and synthesizers in a different approach to the generalized genre.