The Black valedictorian who never received the title 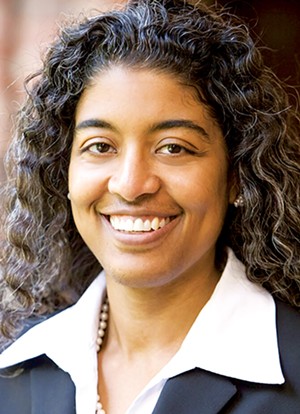 PHOTO COURTESY YALE LAW SCHOOL
Tracey Meares became the first Black woman to hold a tenured professorship at Yale Law School.
In 1984, Tracey Meares had the highest grade-point average in her class and was prepared to be her class' valedictorian. It was of particular significance to her because she would be the first Black person to claim the title in Springfield High School's history.

But the title was denied to Meares, leaving a Springfield documentary filmmaker decades later to piece together a story of systemic racism. The film, No Title for Tracey, premiers April 16 at the Hoogland Center for the Arts.

Today, Meares is a professor at Yale Law School. She is the first Black woman to hold a tenured professorship there.

Despite decades of academic accomplishments, closets full of awards and recognitions and a long and fulfilling career, the pain she experienced at age 17 is still evident. In fact, she says the experience spoiled her relationship with her hometown.

"There are lots of reasons to have a kind of sour relationship with the city. I come home because I love my parents, my family, and I have really close friends. But I've always thought that Springfield was backwards," Meares said. "I couldn't wait to get the hell out. ... From the time I was 17 years old, I did not even spend a summer in Springfield."

She is quick to point out the documentary is not her idea.

The project is being spearheaded by her sister, Dr. Nicole Florence, a Springfield physician, and Maria Ansley, a photographer for Southern Illinois University School of Medicine.

"The documentary is important to my sister," Meares said. "I put this whole thing behind me a long time ago. I do think accountability is important. But nothing is going to make me think differently about these people."

She said the denial of the title was calculated and systemic.

Strange things began happening in the months leading up to graduation, she said. A white assistant principal was caught in Meares' school counselor's office removing her file from a file cabinet.

"I was called to my counselor's office and she told me what had happened. She said she put a lock on the file cabinet to keep anyone from getting in there again and tampering with my school record," Meares said.

Meares said she had previously been told by her counselor that she was No. 1 in her class.

The controversy was well known in Springfield's Black community at the time, he said. But it was not reported in local media, and Robert Blackwell chose not to fan the flames.

"How do you protect your children when there's so much harm that will come based on their race, and only their race? She was an athlete. She did community service. You know, she was loved by all and was just brilliant. Who would deny that? Who would deny that she wasn't a mean girl? So, why wouldn't one have thought about trying to protect that child in a circumstance like that? I mean, she's golden, right? But, quite frankly, we have to protect all of our girls."

Robert Blackwell and his wife, Carolyn, feared that if they made a fuss about how Tracey was being treated, school officials might retaliate against her two younger sisters.

Robert added, "You understand that this is going to happen in society. What you do is try to manage through these things. It didn't change our lives. We still had goals that we had always had. The girls had their goals. And Tracey just kind of flipped that and kept learning, kept achieving, and we didn't spend time commiserating about the situation."

Heather Russell Shura, the white student whose academic accomplishments school officials touted in the 1980s, told Illinois Times on March 14 that she did not know enough about the matter to comment on it. She now lives in Naperville.

Nicole Florence said it is unclear whether Shura was aware of the controversy swirling around her.

"I don't necessarily view her as a bad person in all of this. We don't know if she knew. That is really something for her to discuss. From talking to my sister, I think the objection is to how the system operated," she said.

But Springfield School District 186 Superintendent Jennifer Gill said of the matter, "Obviously, it's very difficult to go back in time and do too much research because many of the individuals who were working at the time, in an official capacity, are deceased. She had the No.1 spot. And the No. 1 spot in any graduating class is the valedictorian. So why they chose not to name a specific valedictorian or salutatorian that year, I cannot go back and justify that.

"I can only learn from the realities that Tracey and her family experienced during that time. But one way that we can make amends is to call her and give her the name that she deserved. And that is the No. 1 valedictorian spot of the class of 1984," said Gill.

Maria Ansley is the photographer producing the documentary. During the day she works for SIU School of Medicine, but she is producing the film on her own time.

"I'm a white girl who grew up in Lincoln. I was in high school about the same time this happened. When I heard about this my first reaction was, 'I thought this sort of thing stopped happening in the 1960s.' So why am I doing this? Well, I'm trying to relate to the white community and make us understand better."

Scott Reeder, a staff writer for the Illinois Times, can be reached at sreeder@illinoistimes.com.

Choosing which laws to enforce