The Bears and the wild heart of football

Monsters takes a loving look back at the legendary 1985 team

When I saw that Rich Cohen was writing about the ’85 Bears I eagerly anticipated his book. Reading Monsters: the 1985 Chicago Bears and the Wild Heart of Football was surprising in a wonderful way. It would have been easy to write a glorified ode to the team, lionizing players and making them larger than life. But Cohen has gone so far beyond that easy formula that his book deserves a spot on the bookshelf of great books about professional football. Cohen has written a history of the NFL, George Halas, the Chicago Bears and countless other actors in the drama that is Bears football. This is a serious book for football historians and fans alike. 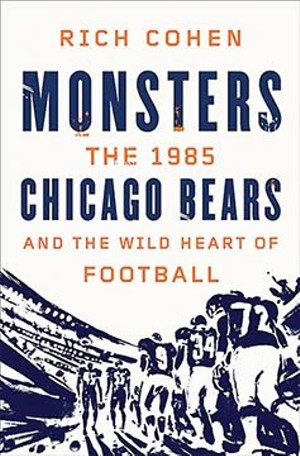 The portrayals of the players and coaches from the championship season capture the swagger that still surrounds the ’85 Bears. Cohen interviews Jim McMahon, a physical and mental shell of the player who quarterbacked the team.

How do you think the ’85 Bears would do if they were playing today?”

“We’d still be kicking ass. Maybe we wouldn’t win a Super Bowl, but you have to remember, some of us are pushing sixty!”

The 1985 Bears were unique in that their head coach, Mike Ditka, and their defensive coach, Buddy Ryan, disliked each other intensely. The anger between the offensive and defensive players often boiled over to practice. Many of the players acknowledged to Cohen that practices were often more physical than games.

Perhaps my love for the Bears and my joyous recollection of the 1985 season prejudice my view of Monsters. I like to think I am above such partisan pride. But even Green Bay Packer fans will enjoy this book. It has humor, sorrow, history and the simple love of sports that make it a book for anyone who loves football. It’s not just a sports book or a Bears book. It’s simply a great book.

A Bears fan for his entire life, Stuart Shiffman served 22 years as an Illinois trial court judge. He presently serves as an adjunct professor at Illinois State University and is of counsel to the law firm of Feldman Wasser in Springfield.