The Ambassador of Salsa

Inclusion and fun can make the world a better place 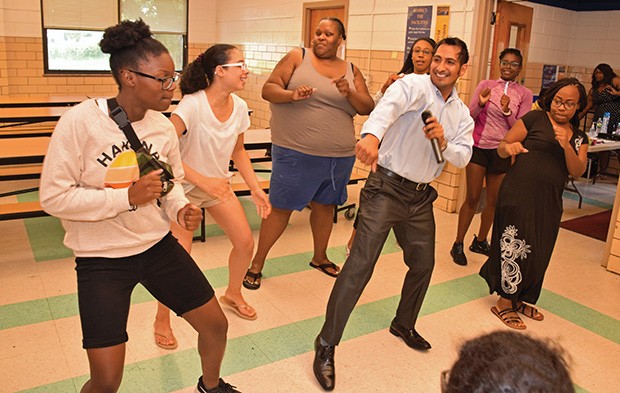 The Salsa Ambassador has reached the 10-year anniversary of his ongoing mission of inclusion through Latin dance, and the dancing diplomat shows no signs of slowing down.

The Salsa Ambassador is 38-year-old Julio Barrenzuela, who for more than a decade has been teaching salsa dancing every place he can, including nursing homes, facilities for persons with disabilities, and youth organizations around central Illinois. His idea is simple, that taking part in salsa dancing will make the world a better place.

Pathway Services Unlimited in Jacksonville recently received an official Salsa Ambassador visit. Pure, raucous joy filled the room for an hour as bright-green-shirted members of the “Salsa Club” joined Barrenzuela to dance, clap, sing and laugh. Many pulled other clients from their seats to join the fun, and soon the place was a whirlwind of music, movement and merriment.

“This is fun because people are enjoying it with me,” said Jesse Mattern of Jacksonville, an original, 10-year club member. “Everybody should come and join our group.”

Barrenzuela formed the Salsa Club at Pathway 10 years ago after being inspired by the response to his visits from the organization’s clients, all of whom have developmental disabilities. He comes back to Pathway several times each year. A recent July session began with the club’s trademark song and its catchy lyrics, “Uno, dos, uno, dos, tres!” and morphed into salsa dancing to all kinds of music, including the obvious crowd favorite, “Achy Breaky Heart.”

Ten-year member Michael Shelts of Jacksonville was equally enthusiastic about the club.
“I love salsa,” Shelts said. “I also love country dancing. I come here and I dance. I love it.”

Barrenzuela opened the 10th anniversary club session by telling all who had gathered, “This is your opportunity to shake it, just don’t break it.” The remark was met with uproarious laughter.

“Music brings people together and that’s what I want to do through my efforts,” Barrenzuela said. “Words alone do not do justice to the smiles and happiness this effort has created for the population and for me.”
Barrenzuela lives in California but spends a lot of time in Springfield, where his family moved after emigrating from Peru 30 years ago and where his mother still lives. This gives him the opportunity to pursue his mission in an area of the country where most people think “salsa” is something you dip with a tortilla chip.
Barrenzuela is changing that perception one salsa convert at a time, and is promoting universal inclusion in the process. 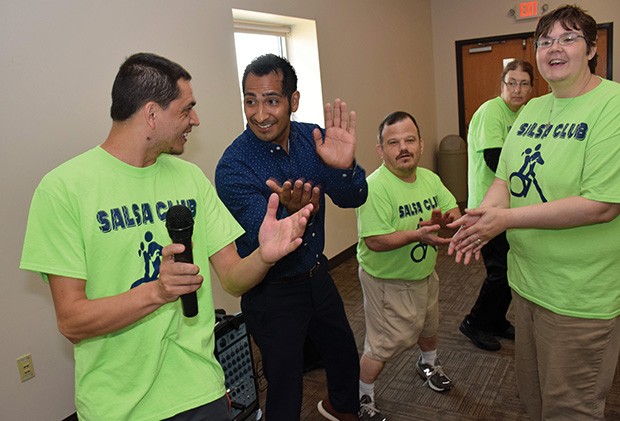 “I want my ‘salsa visit’ to be more than just entertainment, but rather an intentional representation of inclusion,” Barrenzuela said. “This is where the impetus for the ‘Salsa Ambassador’ came from. The title represents my intentional desire to visit people who are often marginalized from participating in activities, such as salsa dancing, because of financial, physical, mental or emotional reasons and invite them into the Latin dancing community.

“The hope is to make a difference by giving the community’s most unlikely people, be it from their wheelchair or jail cell, the opportunity to see themselves as salsa dancers and therefore members of a much larger ‘salsa community,’” Barrenzuela said. “An otherwise unspoken social connection between them and a group they originally knew nothing about nor felt any sense of relationship to.”
Barrenzuela has been officially recognized as the Salsa Ambassador by the cities of Springfield and Jacksonville. He was a finalist for the 2009 Springfield First Citizen Award.

“He did a very good job of opening our eyes to new things”
Most of the 20 teens at the Springfield Urban League Summer Camp at Washington Middle School didn’t even try to hide their lack of enthusiasm upon entering the Salsa Ambassador’s session on July 22. But Barrenzuela quickly connected with them by playing music to which the kids regularly listen.

As the kids jumped up to dance to the familiar music, Barrenzuela worked some Latin dance steps into the mix, and while they were still up he started in with some salsa music. Pretty soon half the room was moving to a Latin beat.

Barrenzuela dances with a Pathway Services Unlimited client in Jacksonville

Always remember the salsa step count, Barrenzuela told them – 1, 2, 3, 5, 6, 7. He had the kids repeat the count until they knew it by heart. He also demonstrated music’s transformative power by playing familiar tunes such as “Happy Birthday.”

“This was something new to learn, I really enjoyed it,” said 15-year-old Brianna Jones. “He did a very good job of opening our eyes to new things, that there is more to life than the internet and social media.”
Fifteen-year-old Mardell Daniels said the “salsa experience” made an impression on him.

“It takes me back to when I was having fun on hot, sunny days,” Daniels said.

Salsa dancing originated in Cuba in the 1920s and its popularity has spread to many parts of the globe. The distinctive dance may be performed solo but is more often done with a partner or in a line with other dancers. Salsa is easily recognizable because most of the movement occurs below the waist, causing the dance’s signature hip movements.

Barrenzuela’s vision for salsa as a tool for educating people on cultural issues developed early in his career with the U.S. Navy. The 19-year-old sailor traveled to ports where he didn’t speak the local language, but he could always find a salsa club where everyone spoke the language of dance.

“It was as if there was an unspoken connection around the world that I was witnessing firsthand,” Barrenzuela said. “While my friends saw it as simply ‘having fun with the locals,’ I saw it as a cultural phenomenon that had to be explored further.”

Barrenzuela dedicated himself to replicating that experience at home after returning from the Navy. He earned a bachelor’s degree in marketing from Southern Illinois University-Carbondale, where he served as president of the Latin American Student Association, the International Student Council and the SIU Salsa Club. In those roles Barrenzuela traveled to rural southern Illinois communities promoting cultural awareness among at-risk children, older adults, and people with developmental and physical disabilities.

Barrenzuela graduated from SIU-C in May 2008 and returned to Springfield to promote his idea that Latin music was a great way to bring people together and to encourage social inclusion and cultural awareness. He read Malcolm Gladwell’s book, Outliers, which argues that it takes 10,000 hours of practice to achieve mastery in a field. That book clicked with his desire to reach people through dance, and inspired Barrenzuela to embark on his 10-year journey as the “Salsa Ambassador.” 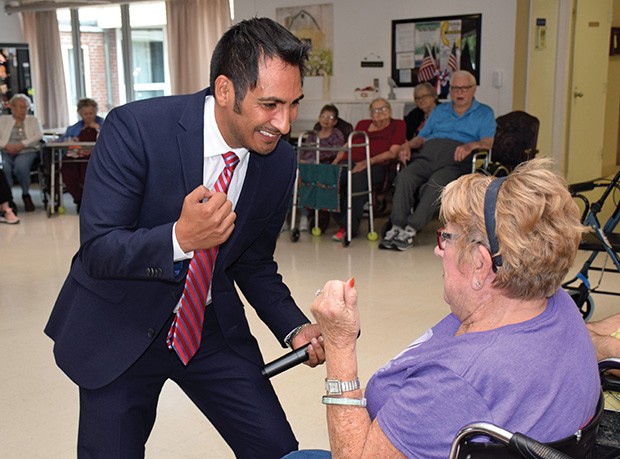 Barrenzuela engages in salsa dancing with Joann Morris, who was undergoing rehabilitation at Sunny Acres Therapy & Senior Services in Petersburg.

“I understood early on that if I wanted to promote inclusion through music and dance I would first have to explore my own personal ability to be inclusive of others,” Barrenzuela said. “I would first have to make sense of what it feels like to be excluded from the mainstream.

“That is why I intentionally set out to meet people who would not have had the opportunity to learn how to dance to Latin music if not for my ‘salsa visit,’” Barrenzuela said. “I wanted to meet the people who were being excluded from the world of Latin music, either because they were told they couldn’t or had convinced themselves they couldn’t dance.”

Barrenzuela is an inclusion advocate in more than just the dance world. He has been involved with the League of United Latin American Citizens, National Image, Inc. and the Immigration Project, defending immigrants against discrimination and promoting educational attainment for underprivileged children. He also earned a master’s degree in Media for Social Justice from Woodbury University in Burbank, California, and received cultural competence training from Harvard’s School of Education Think Tank on Global Education.
Barrenzuela will begin a Ph.D. program in Cultural Studies at Claremont Graduate University in Claremont, California, in the fall of 2019. His dissertation will focus on how Latin dancing brings communities together.

“All of the music and dances bring back a lot of memories”
“Memories” was the program theme at Sunny Acres Therapy & Senior Services in Petersburg on July 24. The 40 residents attending smiled, nodded and clapped as Barrenzuela played Wagner’s “Bridal Chorus,” patriotic songs, the theme from “Rocky,” and “Happy Birthday.” They also sang along with Barrenzuela, some with gusto, on the one-word song he first learned as an eight-year-old United States immigrant – “Tequila.”
Barrenzuela then segued into dance, asking the audience members to “move as you are able.” He individually asked residents, “May I have this dance?” Most agreed and moved to the music from their wheelchairs. One 95-year-old man spontaneously got up from his wheelchair and danced, first with Barrenzuela, then with a female activity staff member.

Barrenzuela has been coming to Sunny Acres for 10 years, and the residents look forward to each program.
“I loved it today, and when he was here last year I really enjoyed it,” said 99-year-old Florence Galassi, who boogied from her wheelchair. “He even danced the polka! ‘Roll out the Barrel!’”

Joann Morris was nearly finished with her rehabilitation stay in Sunny Acres, but was glad she got to experience the Salsa Ambassador.

“I know the ‘Electric Slide’ and how to Cha-Cha, about the only dance he didn’t do was the waltz,” Morris said. “All of the music and dances bring back a lot of memories.”

99-year-old Florence Galassi dances with Barrenzuela at Sunny Acres Therapy & Senior Services in Petersburg.
Barrenzuela’s passion for salsa and his military service inspired him to team up with a nonprofit called “Soldiers Who Salsa,” a San Diego-based program that uses Latin music as recreational therapy for wounded, ill and injured veterans. He said the organization has asked him to serve as its executive director to try and get the program into more than 150 Veterans Administration hospitals nationwide.

World-famous salsa performer and composer Rubén Blades is one of Barrezuela’s role models. Blades shares his passion to give salsa a more meaningful role in the world, not just as a musical genre, but as a force to educate and promote unity.

“In the early days of salsa, when the beats and lyrics were simple, Blades gave his songs purpose and integrity and used them to educate his public, similar to what Bob Dylan did with folk music,” Barrenzuela said. “Blades’ 1984 anthem, Buscando America, for example, best captures a version of the American dream from an immigrant perspective, a dream not of individual success but of transforming the promise of democracy and social justice into a reality.

“Blades’ powerful lyrics resonate with me because not many Latin singers dare to risk their careers today the way he did in the 1970s,” Barrenzuela said.

But it’s not all seriousness and deep social philosophy. The Salsa Ambassador wants participants to have fun.

“I often share with my audience that all of us have the innate need to enjoy ourselves ‘As we’re able, on our feet, in our chairs, or on the tables.” Barrenzuela said.

And if the Salsa Ambassador is not available to get you dancing, his protege is. He is the president of Pathway Services’ Salsa Club, who shared the microphone with Barrenzuela on July 24 to get nearly 50 of his fellow persons with disabilities moving to the beat.

How AND why to DIVERSIFY