War is over after thousands were killed. Flu takes a huge toll. 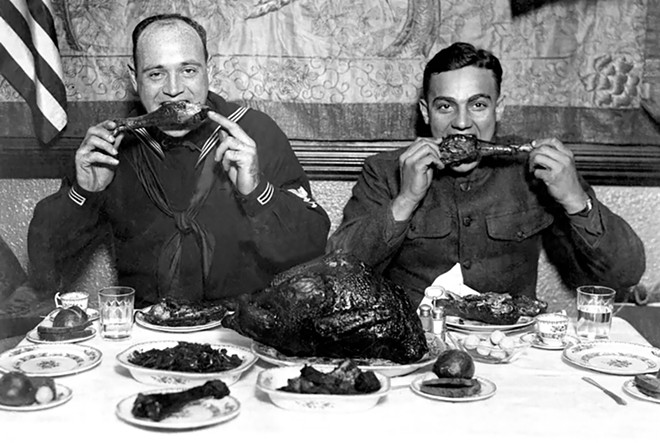 Americans have endured some tough years of late, which is nothing new in our history. One example is 1918, when people found plenty of reason to celebrate Thanksgiving.

Seventeen days before the holiday, the Armistice had been signed, ending World War I. But the nation was still in the throes of the influenza epidemic, which still lingered as Americans sat down to give thanks. The flu epidemic had shut down many American cities throughout the fall, with death tolls in alarming numbers. An estimated 195,000 fatalities from the influenza and related causes were recorded in October alone, and subsequent surges – as with COVID today – would kill even more.

As the nation struggled with the health crisis, the Great War was winding down. Though hostilities had raged for four years in Europe, the U.S. had only declared war in April 1917. Some 4.35 million Americans were mobilized, with 50,000 killed and 230,000 wounded. War news, and casualties, had filled the press for a year and a half, as had the constant somber updates of deaths from influenza.

With that backdrop, it is no wonder that Thanksgiving 1918 was marked with a range of emotions from coast to coast. In Maine, the Bangor Daily News reported in nearby Brewer that "Thanksgiving Day will be an unusually quiet holiday" but "every family has reason to be thankful more than ever before."

A few miles away in Old Town, patriotism ruled the day, as a "Victory Community Sing" was scheduled for 4 p.m. at city hall for "giving thanks and expressing their joy at the great victory of the Allies."

The mood was similar in Springfield, where a "great Thanksgiving mass meeting" was held at the state arsenal. The audience heard a victory address from Gov. Frank Lowden, who declared that "autocracy is dead" and, as a result, "all men around the world are working with a lighter heart and a juster purpose."

Many soldiers were still overseas. The Capital Times of Madison, Wisconsin, reported on the American headquarters in France, where "cantonments and fixed services were held" on Thanksgiving and "an effort was made to provide some substitute for the traditional dinner."

Many French families opened their doors to American troops for Thanksgiving dinner. Back in the States, the homefront was still helping out.

Some households mourned the loss of their soldier boys during the holiday. In the tiny central Illinois village of Tower Hill, Anna Sphar received word the day after Thanksgiving of the death of her son, Chester, an American serviceman. He had only been in France a short while before his passing.

Other loved ones were stricken with grief from the epidemic. In Decatur, Ione Canine, 30, a sixth-grade teacher, died late on Thanksgiving night from pneumonia, caused by the influenza.

Some areas at Thanksgiving 1918 were still shut down from the epidemic. In Richmond, Indiana, the local Palladium reported on "a pleasant Thanksgiving with nothing to do" on a "fair and warm day" since "health officers still keep the ban on all amusements or gatherings."

Like today, there were notable shortages in 1918. In southeastern Missouri, the Iron County Register lamented that "very few turkeys [were] on the market for Thanksgiving." The Morning News of Wilmington, Delaware, reported that turkey was "selling at 60 cents a pound," an exorbitant price for the time, "and being very scarce at that later in the day."

As usual, Americans were in a charitable mood. In Vermont, the Rutland Daily Herald reported that "85 persons were supplied...with Thanksgiving dinner by the Salvation Army." A family of 12 was among the recipients.

Many, though, were just happy for the return of peace. In Normal, scores of citizens attended a Thanksgiving service in the Illinois State University auditorium, where ministers of all denominations gathered to honor the day. Millions of grateful Americans elsewhere also spent part of the day in church, a custom of the era.

They found plenty of reasons to be thankful. In adjacent Bloomington, the Pantagraph declared "never in the history of the world has there been greater rejoicing and for a more earnest expression of thanks than at this time, following four years of bloody warfare."

That sentiment was shared nationwide. A headline in the Bulletin of Pomona, California, read that a "spirit of peace adds happiness to many Thanksgiving Day gatherings throughout the city."

After the grueling year of 1918, it was, indeed, a time for celebration. Many papers shared the sentiments of an advertisement in the Rutland Daily Herald in Vermont in calling the holiday "the greatest of all Thanksgiving Days."