Thanks but no tanks 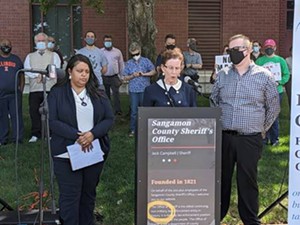 Photo by Bruce Rushton
Flanked by Vanessa Knox of the Faith Coalition For The Common Good and Nick Dodson of the Sierra Club and Sangamon County Democratic Socialists of America, Susan Allen, a member of the Faith Coalition, tells the press that the sheriff's office shouldn't get an armored vehicle.

The sheriff's department doesn't need a surplus military vehicle that can withstand mine blasts and is impervious to bullets from high-powered rifles, representatives of 13 groups said at a press conference outside the sheriff's office this week

"With extreme revenue loss across the board due to COVID, now is not the time to budget for a new, unnecessary toy," said Nick Dodson, a member of the Sangamon Valley Group of the Sierra Club who also spoke on behalf of Sangamon County Democratic Socialists of America.

It's not clear whether the county will get the vehicle Campbell seeks. The sheriff sent an employee to Nevada last year to pick one out from a lot of surplus armored vehicles, but no deal has been reached to get the chosen vehicle to Springfield. The Department of Defense would provide the vehicle for free, with the sheriff's department paying to transport it with money seized from suspected drug dealers.

Campbell says the county needs a vehicle to protect tactical teams responding to people with guns and to deliver phones or food. "Most of Sangamon County would never see this vehicle," Campbell said. "My job is public safety. That includes citizens and deputies. It's basically a rolling suit of armor."

Campbell earlier this month told Illinois Times that appearances in parades would be a possibility if the department gets an armored vehicle. "It lets the public see it," the sheriff said three weeks ago.

Stephen Schnebly, a criminology professor at University of Illinois Springfield, said that armored vehicles in the hands of police send the wrong message.

"They're a tool to project police force, they're a tool to convey police power," Schnebly told about 40 opponents of the sheriff's plan who gathered for the press conference. "Moreover, they are a tool intended to produce fear and to produce intimidation in the eyes of citizens who see them rolling down their streets. I assert that our citizens need no reminder of the force in power that the police can bring to bear on us. We have no need for more fear, we have no need for more intimidation. Many in our community already experience those feelings daily, when they interact with the police, tanks or not."

Sunshine Clemons, co-founder and co-president of the Springfield chapter of Black Lives Matter, said that armored vehicles are barriers to better relationships between communities and the police. "As you can see from all of these organizations (here), there is large community opposition to this plan," said Clemons, who is a member of the city of Springfield's Police Community Review Commission, which is supposed to provide civilian oversight of city police. "It does not help with building the relationship we are trying to cultivate in our community."

Vanessa Knox, a member of the Faith Coalition for the Common Good, urged people to contact county board members to urge that the county deny funding for a vehicle, including money for maintenance and storage. She said she hopes that the board can pressure Campbell to change his mind.

"We have no authority here," Van Meter said. "If we don't appropriate an appropriate amount to run the office, the sheriff can get a court order."

Van Meter said the primary issue is safety of deputies and citizens. He pointed out that the vehicle Campbell wants would have no weapons installed on it.

"I'm sympathetic to symbolism," Van Meter said. "It's a reinforced vehicle, that's all – it has no armaments. ... I think these guys are just getting themselves worked up over nothing."

The county acquired an armored vehicle in 2014 and had it less than two years. After becoming sheriff, the late Wes Barr, who deemed it unnecessary, relinquished the vehicle in 2016. It was deployed once in response to a man with a rifle at a Riverton mobile home court. No shots were fired, and no one was injured.