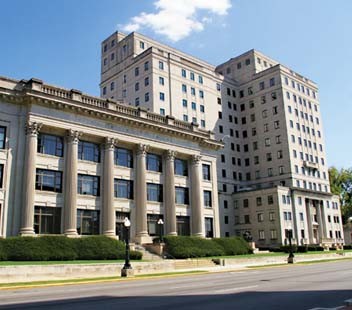 PHOTO BY DAVID HINE
Three main buildings make up the Franklin Life complex, acquired by the state in 2009 for $13.2 million.

I left one question unanswered when I wrote recently that the Horace Mann Educators Corp. building in downtown Springfield was one of four in the capital city designed by a world-famous architecture firm. (“Architectural dreams,” Aug. 4, 2011.) Why did a growing but still small insurance company in a not-growing and small Midwestern city hire a no doubt very expensive firm such as Minoru Yamasaki & Associates for the job? The answer is that the project was not intended to be a mere office building. It was designed to be a corporate headquarters, and as such was intended to impress as well as to facilitate work.

Horace Mann was trying to out-bark the big dog in Springfield insurance in those days – the Franklin Life Co. Founded in 1884 at a meeting at the Leland Hotel, the Franklin had grown sufficiently to need and pay for its own building by 1893. As designed in the Richardsonian style by George H. Helmle for a lot at Fifth and Monroe, this five-story Rookery look-alike had become too crowded by 1910. The old building was razed and the site eventually became the home of the new Ridgely National Bank; back then, Springfield could expect that when a good building was destroyed it would be replaced by something as good or better.

Franklin Life could have bought itself more space by going up – the technology existed – but it chose to go out, eight blocks south in the near countryside on Sixth between Lawrence and Cass. The firm called in Helmle again. This time he gave them a classically proportioned steel-and-limestone block graced by Corinthian columns copied from a Temple of Zeus that had been started by Athenians but completed by Rome’s Emperor Hadrian some 638 years later. The Franklin’s go-getters needed less than two years to open its temple to the gods of actuarial science in 1913, setting an example for the Greeks which that nation, alas, has not imitated.

Franklin eventually filled its new headquarters too, and before tanks pushed into Germany in 1945, desks had long since invaded the headquarters’ hallways and front lobby. To design its third building the Franklin retained the Dallas firm of Aulschlager and McCammon. Principal Walter Aulschlager had become known for his work in New York City and Chicago, the latter being where he spent the prime years of his career. (Among his work there was the Medinah Athletic Club, later the InterContinental Hotel, on Michigan.)

Aulschlager’s glory days might have been long past by the 1940s, but he remained a competent and cost-conscious designer. An article he wrote for the 1921 number of American Building magazine was titled, “Fiscal Architecture, Or the Art of Making It Pay.” No kidding. For the lot next door south to the Franklin’s original home office, Aulschlager in 1948 delivered a tower of 11 office stories, built of the same fine materials and the same neo-classical style of its parent, all for $600,000.

Parent and child were joined in 1952 by yet another building, this one a 12-story tower that joined the two (and thus managed to detract from each). The final addition to the complex opened in 1964; this was a free-standing four-story building facing Seventh Street, which became the new main entrance.

The state thus acquired a complex with room for 1,300 workers for use by an agency that employs 500. The state has begun moving workers from several different agencies into the Franklin in yet another round of its endless game of  musical chairs, with its endless retrofits that add cost and disrupt agency operations. There is an agency supposedly determining the state’s long-term space needs and planning for them; one wonders if anyone knows where they put it?

While the State of Illinois struggles to clean up yet another mess of its own making, we will turn to a much more distressing kind of waste. The state needed someplace to house the State Police because the ISP’s headquarters in the State Armory had become derelict. That happened because the State of Illinois is one of those rare building owners who trashes its own buildings in ways that would get a tenant thrown out onto the street. I fear that the same shortsighted neglect that wrecked the Armory (“Protecting the protector,” April 8, 2010) may well await the Franklin Complex. Insurance’s Temple of Zeus might crumble a lot sooner than its model.