Temple of the Law

The state is doing justice to the Supreme Court Building 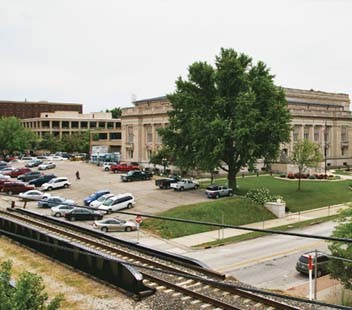 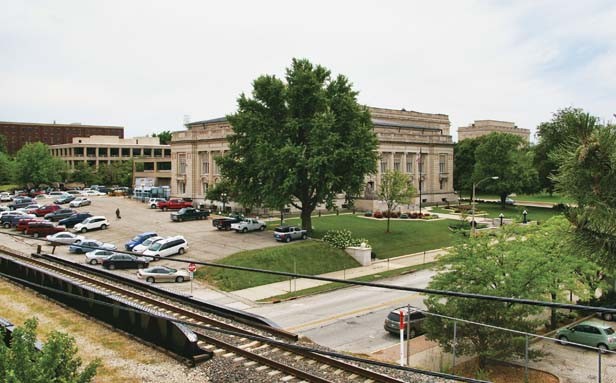 PHOTO BY DAVID HINE
With its $12.6 million Supreme Court rehabilitation, can the state also do something to improve the looks of the parking lot?

The words audi alternam partum – roughly, “hear the other side” – are inscribed on the wall of the Illinois Supreme Court chambers in Springfield. As a maxim to guide the administration of a state court system, it doesn’t rank with “liberty and justice for all,” but in Illinois, you don’t want to aim too high.

On June 6 the governor’s office announced the awarding of contracts for a one-year $12.6 million rehabilitation of the court’s 1908 building at Capitol and Second in Springfield. This is good news. The major state buildings from the 1870-1930 period are not Springfield’s sole claim to architectural distinction, but they are the city’s only claim to architectural grandeur. Sadly, the State of Illinois is not always a good steward of its built heritage. (See “Protecting the protector,” April 8, 2010, and “Temples in ruins,” Sept. 15, 2011, at illinoistimes.com.) We can be grateful that this building at least is getting needed attention, even if Mr. Quinn’s justification for doing it was tawdry. “This Illinois Jobs Now! project will preserve and protect a historic state-owned building,” crowed the press release, “while creating jobs and driving Illinois’ economy forward.” Just once I’d like to hear a governor say, “This is a beautiful building that can never be replaced, and we’re spending $12.6 million just so we won’t ever have to.”

It did not seem destined to be beautiful. The commission named to oversee the design and construction of a new court building held a competition to select the architect for the job, but the fix appeared to be in. The job was open to any architect in Illinois, but the only one who submitted a design by the deadline was the state’s own official architect, William Carbys Zimmerman.

Happily, Zimmerman was a capable designer, if not an original one. The fact that his creation looks like the U.S Treasury Building in Washington, sans portico, is a good or a bad thing, depending on your view of the neoclassical, but its proportion and restraint make it a welcome counterpoint to the vulgar Statehouse across the street.

Decorating the new temple of law with ceiling and wall murals was entrusted to Albert Henry Krehbiel, a youngish art instructor from Chicago. He faced the institutional version of the problem every new home decorator faces: Where to find a painting big enough to fit over the sofa? Some of the murals would measure as long as 21 feet, and he had to move a barn to his place in Park Ridge for use as a studio.

Critics of the time used words like “noble” and “dignity” to describe the results. They are pretty, certainly, in that wanly impressionistic style common to Midwestern painters of the period. But I can’t say they ever stirred in me anything but a desire to send someone a postcard.

Krehbiel was heir to that dubious tradition in which the Ideal in all its manifestations was portrayed by female figures. (His wife Dulah stitched up some Grecian robes and modeled for him; that’s her in “Law and Equity” on the wall of the Appellate Court chambers.) Absurd as they might be as symbols, Krehbiel’s figures are formidable women, and real; imagine the U of I women’s rugby team on their way to a toga party.

Women of course were considered plausible representations of the Ideal because they were thought to be above the grubbiness of the real. Which they weren’t, in political and economic terms, but that was only because men kept them down by thus raising them up. (Women, remember, did not have the vote when the building opened.) The court that is surrounded by images of Justice and Law as a female did not seat a woman justice – her name was Mary Ann McMorrow – until 1992.

It’s hard for we-uns today to be moved by allegory of this sort. One Krehbiel historian describes one mural as depicting “Law and Justice surrounded by a group of men representing Wealth, Industry, Agriculture, the Church and Education.” To my eye they are ganging up on Law and Justice; I can’t see it without thinking that it belongs across the street, in either the House or the Senate.

It is outside that disappoints. Not the building itself but the setting. That has brightened in recent years. For decades it faced a gas station where now stands the state library. Less happily, the houses that for so long shared the eastern third of that block of Capitol are gone. However incongruously they compared to the court building in scale and ornamentation, the houses did not present as barren an aspect as the unscreened parking lot that replaced them. The fix-up announced by Quinn calls for modifications to improve the security and circulation there; it would be nice if the state just this once heard the other side in the argument about parking and improved its looks too.