More than slavery and civil rights 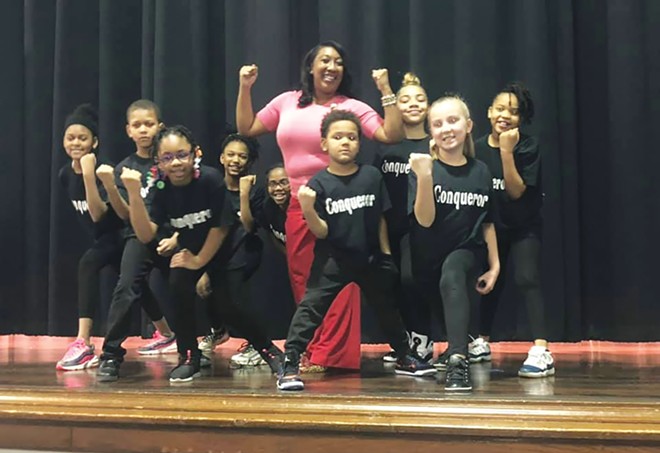 Photo courtesy of Erica Austin
Erica Austin with a group of Feitshans Elementary School students who put on a play about Black inventors.

Teaching Black history is more than just learning about it in a textbook, it's also about experiencing it in real life. For me, learning about Black history did not start in school, it started at the Springfield Urban League's Adolescent Responsibility Program (ARP) under the guidance of Ms. Doris Chambers. At ARP we learned that Claudette Colvin was the first person to refuse to give up her seat on the bus, not Rosa Parks, and that Sarah Boone invented the ironing board. I also learned about Alvin Ailey, who started his own dance company, open to Black dancers; James Baldwin, a playwright and activist; James Weldon Johnson, who wrote the Black national anthem, and more. I learned about the importance of holidays such as Juneteenth and Kwanzaa. It was in ARP where we were taught the significance of Black history, why we should never forget our heritage and to pay homage to the Black trailblazers who made great contributions to our society.

In public schools, we learned about the African Americans who were very public with their work, and this tended to focus on the same people every year: Dr. Martin Luther King Jr., Rosa Parks, Maya Angelou, Muhammad Ali, Malcolm X and Michael Jordan. The lessons were often limited to slavery or the civil rights era, but never about the many contributions that Blacks made to our economy and being agents of change. While those are important moments in Black history, there is so much more.

In ARP, we spent two months practicing Black history facts to prepare us for the annual Black History Month Bowl that consisted of the three youth development centers on the east side: Springfield Urban League, Boys & Girls Clubs of Central Illinois and The Community Center, which no longer exists. That became a highlight of mine, not only learning about my rich history, but competing for the championship title that we won for five years straight.

It was because of ARP that I was able to thrive in my college African American history classes. I began to learn more in-depth about just how powerful of a people Black people were and are, along with the contributions that were made that helped the human race as a whole.

In 2019, a group of students at Feitshans Elementary School, one of the schools where I teach Black history, performed a skit about Black inventors. There was initially some hesitation from the educators that the students wouldn't be able to memorize their lines because the turnaround time was rather quick. Yet, in two days, each student had learned their lines, plus those of others in the play. The students were excited to learn about different people in Black history. They yearned for something different and wanted more. Their enthusiasm fueled me and brought tears to my eyes. Through this skit, they were able to see themselves in the characters they were acting out and experience the richness of Black history, instead of seeing the negative stereotypes forcing them to settle for distorted views of who they are and what their culture represents.

For me, teaching Black history is exhilarating. It provides me with the ability to commit to telling the complete and vibrant story of Black culture to both students and adults. Through Black history, we learn so much about ourselves and our abilities to overcome challenges – big and small. We also learn from the mistakes people made in the past and learn the importance of treating others with compassion. Through teaching Black history, our students are learning about what it means to persevere, a critical character trait to have at school and in life.

Springfield has a rich history that we must teach to our future generations so that they understand the significance of their city. Some Springfield history includes the 1908 Springfield Race Riot (which led to the formation of the NAACP), Lincoln Colored Home, Comer Cox (it's not just the name of a park) and other home-grown trailblazers who have made great strides in their quest for equality.

I plan to continue what Ms. Doris Chambers taught and exhibited to our youth: How to have great respect for the past and the present, so they can create an even better future.

Erica Austin works as deputy director in the Office of Community Care for SIU School of Medicine and won a seat on the Springfield District 186 school board earlier this year.