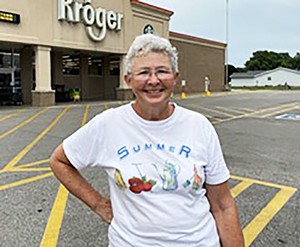 PHOTO BY DEAN OLSEN
Gwen Podeschi, a Taylorville resident and longtime Kroger shopper, said she has been frustrated that no air-quality tests have been released, and few other details of the investigation have been made public.
The potential reopening of a popular Taylorville supermarket by the end of December "cannot come soon enough," longtime Kroger shopper Gwen Podeschi says.

"I am delighted," she said.

But the 64-year-old retired librarian said she is frustrated why it took so long for the store at 201 E. Bidwell St. in Taylorville to announce a reopening.

The building was closed by the Illinois Environmental Protection Agency on July 29 after the state learned about alleged improper handling and removal of materials containing asbestos. It had operated as a Kroger for at least 20 years in the Christian County seat of 10,500 people.

Eric Halvorson, a spokesman for Cincinnati-based Kroger, the nation's largest grocery chain, said in an email that the state lifted its seal order on the store Dec. 6.

"Kroger Central Division announces its intention to reopen its Taylorville store before the end of the month," a company news release said.

Since the store's closure, the release said, "state-approved and licensed professionals have made the desired repairs, and extensive testing confirms the store can be readied to serve customers again."

According to the release, Kroger Division President Colleen Juergensen said she is "eager to reopen the doors, greet the Kroger family and welcome back all of Taylorville's loyal Kroger customers. I am grateful for the shoppers who stood by us and rallied on our behalf in August. We're thankful their support never wavered. It was for them – customers and associates alike – that we focused so intently on our plan to reopen. Now, we hope that is possible just in time for Christmas."

Kroger officials said they have scheduled two hiring fairs to "rebuild" the store's team of workers: from noon to 3 p.m. Dec. 9 and Dec. 16 at the Taylorville Public Library, 121 W. Vine St.

The Taylorville Kroger had employed about 90 workers before the temporary closure. Some of the employees ended up working at Kroger stores in Decatur, some took leaves of absence, and some got jobs elsewhere, according to the release.

"I am so proud of the way the community has reached out to every one of our associates, reassuring them Taylorville will be back to support them, letting them know how much they were missed, because the Kroger team is like family to them, and they want us to come home," Taylorville store leader Robin Gross said in the release.

The suit, which remains pending, called for both companies to work with the state on a remediation plan and the payment of civil penalties of up to $50,000 apiece.

Jamey Dunn-Thomason, a spokeswoman for the attorney general, said in an email:

"Throughout this remediation process, the priority of the Attorney General’s Office has been protecting the health and safety of shoppers and Kroger employees. Our office is committed to ensuring that Kroger and SSI Services are held accountable for creating this hazard and for preventing any further harm to the public’s health and the environment."

Kroger officials and representatives of the IEPA and Raoul's office either declined comment or didn't respond to several specific questions from Illinois Times. Officials from the union representing Kroger workers – the Union of Food and Commercial Workers – didn't return phone calls from the newspaper.

Questions that remain unanswered include whether anyone was harmed by the asbestos, which can cause cancer and damage the lungs. Also unanswered are how long workers and the public were exposed, and the extent and cost of the cleanup.

An August news release from Raoul's office quoted the attorney general as saying Kroger and SSI "have jeopardized the public's health by exposing shoppers and employees to dangerous materials containing asbestos."

SSI was conducting a renovation project designed to remove 39,500 square feet of floor tile and mastic, an adhesive, from the Taylorville Kroger when the alleged violations occurred. Removal of the materials was scheduled to take place between July 18 and Sept. 2.

Raoul's suit said SSI was improperly removing, handling and disposing of the material. The suit said SSI failed to take precautions such as making sure the material was sealed off or wet when it became "friable," or pulverized and capable of releasing microscopic asbestos fibers into the air.

Podeschi said she has been frustrated that no air-quality tests have been released, and few other details of the investigation have been made public.

Dean Olsen is a senior staff writer at Illinois Times. He can be reached at dolsen@illinoistimes.com, 217-836-1068 and twitter.com/DeanOlsenIT.