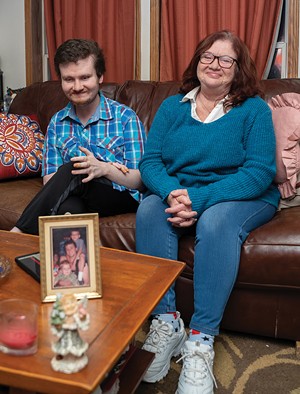 Photo by Josh Catalano
Sherry Morris, a part-time employee of Help at Home, would gain paid time off, beginning in January 2024, if a bill recently passed by the Illinois General Assembly is signed into law. The Riverton resident also cares for her 30-year-old son, Kyle, who has mental disabilities and lives with her.

Sherry Morris says a bill that will soon head to the governor's desk for his signature would boost her quality of life "tremendously" as she works in low-income clients' homes to help them maintain independence.

"It's mind-blowing," Morris, 66, of Riverton said in response to the General Assembly's recent passage of a bill that would, for the first time, require all Illinois employers to offer up to five days of paid leave for any reason each year.

Morris, a part-time employee of Help at Home, a Chicago-based company that operates nationwide, is one of an estimated 20,000 home-care workers represented by SEIU Healthcare Illinois who would be affected by Senate Bill 208.

Advocates say Morris and an estimated more than 1 million workers across the state – both union and nonunion, full and part-time – would gain paid time off beginning in January 2024. The biggest group of workers to benefit would be in the service industry.

"This is amazing," said Morris, who is single and also looks after her 30-year-old son, Kyle Patterson, who has mental disabilities and lives with her.

Morris said she earns $15.85 per hour and works an average of 23 hours per week. She rarely can afford to take unpaid time off, and she has to take her one week of paid vacation all at one time, not sporadically during the year. She said she would welcome paid time off and a little less stress in her life because of the legislation, which is known as the Paid Leave for All Workers Act.

"If I'm not working, I don't get paid," Morris said. "We basically live to work. ... Now I can schedule things and not have to make up hours."

The United States is "an outlier on the world stage" when it comes to paid time off, according to the Illinois Economic Policy Institute. "Fully 179 countries, or 94%, guarantee paid sick leave for workers, but the United States does not," the institute said in a 2020 report.

The institute estimates that 1.5 million workers in the state – almost one in every four – don't have any paid sick time available to them. Illinois would become one of 16 states, along with Washington, D.C., with either mandatory sick time or mandatory paid-time-off laws.

A few Republicans voted for the bill in the Democratic-controlled General Assembly. The Illinois House approved SB 208 on a 78-30 vote Jan. 10, with seven Republicans voting for it. The Senate approved the bill on a 38-16 vote, with no Republicans supporting it.

The Illinois legislation would require paid leave to be accrued at a rate of one hour for every 40 hours worked, up to a minimum total of 40 hours. Employees could start using their paid leave on their 90th day of employment, or earlier if an employer agreed, but employers could require their employees to provide notice for using PTO, if the need for it is foreseeable.

Time-off benefits offering only sick time would have to expand to time off for any reason. The legislation wouldn't prevent unionized employees from negotiating paid leave exceeding the 40 hours, and nonunion employers would have the option of offering more than 40 hours, too. The bill's paid leave requirements could be waived for unionized employees only if they agreed to it in a labor contract.

Unused paid leave would carry over annually, up to 40 hours, and employers that violate the act could be required to pay fines to the state and compensatory damages to affected employees.

Private employers, the state and local units of government would be covered by the bill, but school districts and park districts would be exempt. The bill also wouldn't preempt local laws passed by municipalities such as Chicago, which already requires paid sick leave.

"Whether it's dealing with a sudden family illness or an emergency auto repair, sometimes life gets in the way of work," SB 208's sponsors, Senate Majority Leader Kimberly Lightford, D-Maywood, and Rep. Jehan Gordon-Booth, D-Peoria, another of the bill's sponsors, said in a joint statement.

"Paid leave will have a significant, positive impact on the lives of residents across our state and underscores our commitment to uplifting working families," Lightford and Gordon-Booth said.

But outgoing Sen. Jason Barickman, R-Bloomington, said the bill's mandates would create burdens for "mom-and-pop shops that are the lifeblood" of the Illinois business community.

Most business groups eventually took a "neutral" stance on the bill because of provisions that included a one-year preparation period before requirements would kick in. But Illinois Chamber President Todd Maisch said, "We didn't think it was great. This got it at least into the barely acceptable range."

He said he worries about the legislation's financial impact on small businesses as well as the record-keeping involved.

The National Federation of Independent Business remained opposed to the bill. Illinois State Director Chris Davis said the cost burden will be "very difficult" for some small businesses to implement and could put some out of business.

Wendy Pollack, director of the Women's Law & Policy Initiative at the Chicago-based Shriver Center on Poverty Law, which backs the legislation, said there are "plenty of studies that show that offering these benefits actually makes a workforce more productive."

The Economic Policy Institute says paid sick leave leads to less risk of spreading infections at workplaces and boosts the economy through increases in consumer spending.

The arguments in favor "totally discount that businesses know what makes them profitable," he said. "Those owners know what it takes to get good employees."


Sarah Labadie, associate director of policy at Chicago-based Women Employed, said the criticisms that Chicago's 2017 mandatory sick leave ordinance would be a job killer never came to pass, and the same would be true for the rest of the state under SB 208.

Many workers needing to take time off face "an impossible situation," Labadie said. "Often, one unpaid day off is the difference between paying a bill or not."

Morris, the home care worker, said that if she had a chance to thank lawmakers for supporting the Paid Leave for All Workers Act, she said she "probably would kiss their hands and tell them how much it helps people who work in people's homes."