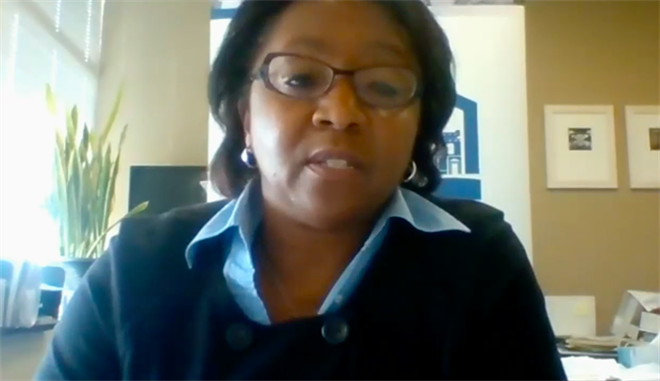 Neighborhood Housing Services of Chicago President Donna Clarke testifies virtually about racial inequities in homeownership at a joint hearing before the Senate Executive and Commerce and Economic Development committees on Thursday, Oct. 15.

In Illinois and around the country, an increasing number of universities, investigators and researchers are turning up evidence of systemic racism in the financial sector that has plagued Black Americans for decades

In June, a report from Chicago radio station WBEZ-FM and the nonprofit news organization City Bureau found that for every dollar banks loaned in a white Chicago neighborhood, they only invested 12 cents in Black neighborhoods. A 2019 Duke University study estimates Black Chicagoans lost between $3 billion and $4 billion in the 1950s and 60s due to predatory housing contracts. A 2013 Pew report shows that nationally, African Americans lost 53 percent of their wealth between 2005 and 2009 due to the collapse of the housing market.

On Oct. 15 the Illinois Senate Executive and Commerce and Economic Development committees held a joint hearing on racial equity in lending and home ownership. The hearing was the latest in an ongoing series of hearings prompted by the Illinois Legislative Black Caucus agenda to end systemic racism.

"The time is long overdue for Black households to be met with policies that uplift them and provide them with access to better credit and lending opportunities," said state Sen. Mattie Hunter, a Chicago Democrat who chairs the Executive Committee. "It's imperative that we work to close the wealth gap and level the playing field."

Officials from various state agencies, banking executives, community advocacy groups and researchers all appeared before lawmakers as part of a four-hour hearing that delved into the evidence and ongoing practice of systemic racism in Illinois' financial institutions, and what solutions the state government can pursue in partnership with private firms to end it.

"What we want to see is a lending market where race is not the largest predictor of approval for a home loan. We ultimately want to see a lending market where these disparities do not occur," said state Sen. Jacqueline Collins, a Chicago Democrat and chair of the Senate Financial Institutions Committee. "We need an end to this cycle of disinvestment, which is at the very root of generational poverty here in Chicago and throughout the state and the country."

Chasse Rehwinkel, acting director of banking for the Illinois Department of Financial and Professional Regulation, testified that being able to build assets, such as property or businesses, is "key to intergenerational wealth creation. Without adequate access to lending, it is impossible for communities to develop long-lasting economic growth." Rehwinkel said African Americans have historically been and continue to be systematically excluded from this process of wealth creation.

"This is a large disparity," Rehwinkel said. "It is only the tip of a larger systematic issue. Our economic system, for better or worse, is built on the extension of credit and the repayment of debt."

According to Rehwinkel, the problem is nationwide. A 2017 report from the Federal Reserve to Congress found that nationally, Black business owners had their applications for credit denied twice as often as white business owners. A 2019 Federal Reserve report on access to credit found that 45 percent of borrowers who were Black and applied for any type of credit in the prior year were denied, compared to 18 percent of white borrowers.

The process of deregulation and consolidation, which has been going on for the last four decades, according to Rehwinkel, has pushed out smaller unique institutions that specialized in serving lower income borrowers and ethnic enclaves in metropolitan areas. That has resulted in some communities being underbanked or having no access to banking services at all, making it harder to obtain loans.

That applies to about 45 percent of African American households, a financial status the Federal Deposit Insurance Corporation estimates costs consumers an average of $182 per year to access their own money.

Rehwinkel suggested lawmakers could help combat systemic inequities by creating programs to incentivize lending in disadvantaged communities and create opportunities for banks to establish branches in underbanked communities to cater to individuals who currently lack services.

Cerita Battles, who serves as head of affordable lending at JPMorgan Chase & Co., also testified before the committee.

"As one of the largest lenders to Black and Latinx homeowners nationally, it was apparent that we needed to be more intentional about serving our local communities, especially those of color," Battles said. "We also hold ourselves accountable to doing more, not just in the city of Chicago, but in the state of Illinois and nationally to advance homeownership."

Earlier this month, Chase announced it was committing $30 billion over the next 5 years nationally to "address some of the largest drivers of the racial wealth divide." The commitment includes $8 billion in mortgages and $4 billion in refinance loans, explicitly to help Black and Latino households. Chase has also committed to provide $600 million in mortgage lending to Black and Latino Chicagoans over the next 5 years, making Chicago the only city where the bank made a commitment separate from its national plan, according to WBEZ.

Battles referenced WBEZ's report on lending in Chicago, which showed Chase was the worst offender among major banks in the city for giving less to Black homeowners. As a percentage of all dollars lent by Chase between 2012 and 2018, Black neighborhoods received around 2 percent, 5 percent in Latino neighborhoods.

Wells Fargo, U.S. Bank, Fifth Third Bank and Associated Bank each submitted written testimony affirming support for diversity initiatives and a commitment to more equitable lending in the future, but Battles was the only representative of a banking institution to testify.

That equates to about $156 billion in cumulative losses in asset value for Black homeowners in the United States, more than the combined operating budgets of Illinois, Michigan and Wisconsin's state governments for their most recent fiscal year.

Donna Clarke, interim president of Neighborhood Housing Services of Chicago, spoke to lawmakers about the difficulties faced by Black homeowners around the U.S.

"I've spoken to other Black community development groups in other major urban cities, and yeah the data is the same and in some instances it's even worse," Clarke said. "In 2019 the Black homeownership rate in the United States hit its second-lowest rate in 26 years, at 42.1 percent. In Illinois the rate was even lower, at 39 percent."

According to Clarke, the gap in home ownership between Black and white Americans is higher today than it was in 1934. Citing a 2020 MIT study called "The Unequal Costs of Black Homeownership," Clarke told lawmakers that African Americans on average pay higher mortgage interest rates, higher insurance premiums and higher property taxes than white families. By retirement age, those extra housing costs are estimated to equal $67,320 in lost savings, which contributes to the wealth gap and serves as a barrier to Black Americans owning or keeping their homes.

"The financial institutions and other companies make new promises to infuse capital into Black and brown communities. ... However, if the systemic issues in the mortgage lending process that contributes to these disparities are not also addressed, this money will not reach our communities and we will be here in another 20 years," Clarke said. "At the rate we're going, it's going to take us 238 years to close the racial wealth gap,"

According to Clarke, there is no single solution that will solve every inequity in the housing industry, but down payment assistance would lead to the most immediate and obvious relief for Black homeowners.

Several testified about the appraisal system, which is a somewhat subjective process in which a qualified third party determines a property's value based on factors such as market trends, recent sales and visual inspection of the home.

Critics of the appraisal system say the race of the owner has been shown to skew the value of the home. The Chicago Sun-Times recently reported an incident where a black homeowner in Chicago had their home appraised at a lower price than what they paid. After getting a second appraisal, this time without disclosing their race, the property was valued $62,000 higher than the first appraisal.

A 2020 study that looked at appraised values concluded neighborhood racial composition was a larger factor in appraised value in 2015 than it was in 1980.

Sheila Sutton, who testified as a policy expert representing Housing Action Illinois, spoke about the appraisal process through the lens of her prior work with a lender. "We had homes that were the exact same home... And we had $100,000 difference between appraisals, on homes that were across the street from each other."

Sutton suggested lawmakers could revise the appraisal process at the state level, given that appraisers are licensed by the state.

Collins said the challenges to addressing the issues lie partly in state government's regulatory framework, but she stressed that banks must be held to account.

"The solutions to how we achieve a fairer lending market are going to need to come from banking institutions themselves," she said. "I appreciate the representatives of those institutions who have made time to participate today, but I do want to express disappointment that some have declined to do so."

Hunter said legislators "have a lot of work to do" to remedy the issues before addressing the banking firms in her closing remarks.

"This is a criminal situation here as far as I'm concerned," the senator said. "You have withheld billions and billions and billions of dollars from my community, from our community. And many of y'all really need to lose your license, your banking license. Regulation isn't working, it hasn't worked. ... Today is the beginning, only the beginning, and we are watching you all, especially as you all sit down with us as soon as possible to resolve these issues."

Contact Raymon Troncoso at rtroncoso@capitolnewsillinois.com. Capitol News Illinois is a nonprofit, nonpartisan news service covering state government and distributed to more than 400 newspapers statewide. It is funded primarily by the Illinois Press Foundation and the Robert R. McCormick Foundation.