Music needs a live audience, but "Sunday at Six" will do for now 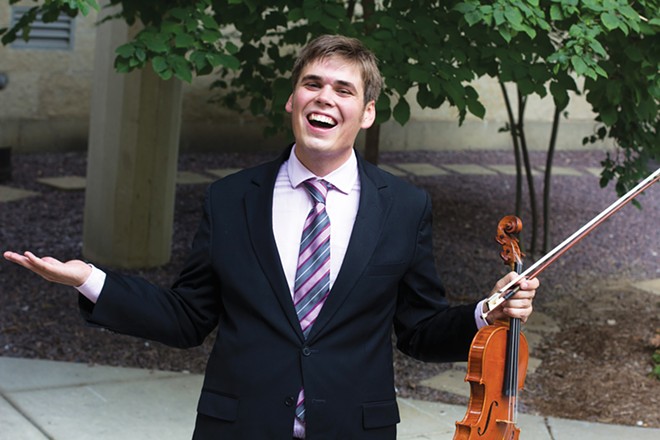 "Previous to the pandemic, things had been looking good and positive," said Illinois Symphony Orchestra executive director Trevor Orthmann, during a phone conversation last week. "We had great concerts up until February – the season was going well."

Suddenly the ISO was faced with having to cancel 2020's final two performances – and all other programs, including the popular Concert For Kids, which had been set for April – in compliance with federal and state pandemic guidelines. The ISO found itself with a problem now common to arts organizations but never previously imagined: how to keep their mission – and the music – alive while shorn of the ability to safely assemble audiences, let alone musicians, for traditional live performances.

A quick visit to the ISO's "Symphony Channel" on YouTube reveals several videos made and posted by individual members of the orchestra since the lockdown began. While these are enjoyable showcases, Orthmann, ISO music director Ken Lam and director of marketing Beth Wakefield hatched a plan for something a little more ambitious and engaging – a series of live performances to be streamed each week via YouTube. The "Sunday at Six Recital Series" debuted on Sunday, May 31, with an hour-long concert by ISO Concertmaster Roy Meyer from his Chicago apartment, featuring works of Bach, Dvorak and others.

Lam, who is finishing out his third season with the ISO, says he was drawn to Springfield, not only by the orchestra, but also by the community. "Here and in Bloomington-Normal as well, we have many people who feel strongly about the community having access to the arts." He describes the sense of camaraderie and togetherness involved in coming together to rehearse and perform. "We look forward to meeting nine times a year to make music for the community," he said. Of course, for now that is impossible. "The funny thing with this pandemic is we are having to think of new ways to reach out to our audiences," he said. "It's a very interesting time. Our symphony's season motto is 'Life Music.' The thing is, the audience is part of the performance just as much as the people onstage – same in the theater, same in the concert hall. Music is not like a painting that stays there forever. You make music and then it's gone, so you have to be there for the moment. When you have that experience, you literally bring people together."

One initiative Maestro Lam is excited about, which will be happening within a few weeks, is the previously announced merging of the ISO with the Sangamon Valley Youth Orchestra. "This is the third youth orchestra I've merged as a conductor," he said, "and each time the synergy was just amazing. I've been reaching out to this youth orchestra since the first day I started in Springfield. As one organization, we will be able to share resources and give opportunities to the students much more readily." He described a similar program he was involved with in Charleston, South Carolina, which increased enrollment from 40 or 50 students to120 within two years. "With the right leadership and consistent support, I think this program can grow and reach new heights," he said.

Reflecting on the changes wrought by the pandemic, Lam said that one thing he is thankful for is that, despite the cancellations, the board elected to continue to partially pay the ISO's musicians. "It was just a wonderful gesture. It shows the commitment of the board to the orchestra and the musicians." The idea of doing videos and streaming concerts was largely born from this financial decision. Though it is hard not to long for the days of live audiences and communal rehearsals and performance, the approach does have its unique rewards. "The audience at home sees another side of the musician, a more human side," he said. "Some of our musicians are technologically advanced because they are of that generation – they are in their 20s and have probably been doing livestream videos for a long time already. Looking forward, Lam says that ideas are being considered for video and streaming in the future, even into the fall season. "If the halls are open and we are allowed to have a social-distanced concert or something, the question is, would our patrons be comfortable doing that? And who knows what's going to happen in two months' time?"

"Our goal is to get back to live performances as soon as we possibly can," said Trevor Orthmann. "Just as long as it will be safe for the audiences as well as the musicians – it's weighing all of those things and making decisions." He says there is a possibility being discussed for the ISO to perform a small live outdoor performance "probably of a small ensemble or an individual musician" – at the end of August or early September. Whether this will be the beginning of a "new normal" or just a way to keep the symphony visible to the community as things continue to evolve remains to be seen.

The "Sunday at Six" series began this past Sunday, May 31, with a performance by Roy Meyer, who has been concertmaster for the ISO since 2015. "It's been a great few weeks preparing for this concert. I had been fairly stagnant for a while and this motivated me," he said at the top of the performance, which is available to view in its entirety on YouTube.

Meyer explained that the recital would be relatively brief ("I think everybody's attention spans have changed a little bit.") and that he would be concentrating on multiple movements from a few pieces rather than any complete works. The show began with a solo violin performance of Bach's "Sonata No. 1 in G minor" (adagio and fugue) followed by "Sicilienne Opus 78" by Faure, which was written in 1893 for Maurice Maeterlinck's play, Pelléas et Mélisande and was described by Meyer as drawing on themes of creation and destruction, "which feels like something we might be going through a little bit right now." Unfortunately, the first attempt at this piece – on which the soloist enhanced the performance with an accompaniment app – was interrupted by an emergency alert on Meyer's phone regarding a Chicago transit shutdown due to protests. This was the only technical glitch of the evening and was soon remedied. Meyer successfully performed the Faure piece after only a short delay.

The next selection was the first and third movements of Vivaldi's "Concerto in G minor," which Meyer described as being familiar to him from the cradle. In addition to playing the solo portion live, Meyer had also recorded the first and second violin parts, the viola part and the cello part, effectively transforming himself into a one-man quintet. The concert concluded with two live violin duets with Meyer's girlfriend, Maya, who accompanied him on short pieces by Bach and Dvorak.

Overall, the first "Sunday at Six" was an intimate and casually beautiful musical experience, with fine performances, tasteful selections and unique technological assists to keep things interesting. It may not be a perfect substitute for a concert experience, but it will do for now.

Upcoming with the Illinois Symphony

The schedule of upcoming "Sunday at Six" concerts will include ISO's principal flute Kim Risinger with Angelo Favis on guitar (June 7); the ISO Percussion Ensemble (June 14); ISO principal horn Brian Goodwin (June 21); and will conclude on June 28 with ISO principal harp Eleanor Kirk, followed by an online version of the Illinois Symphony Orchestra's annual fundraising gala. Full details on the series are available at ilsymphony.org.