My favorite cheese, and a workhorse in my kitchen 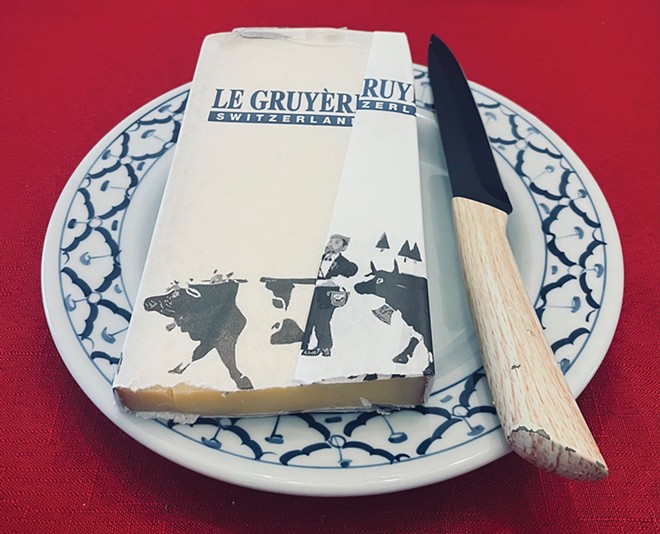 Back in 1973, I was a student at the University of Illinois living seven miles off-campus in a trailer park in rural Champaign County. On my drive home from classes, I used to pass a little fromagerie appropriately named "The Cheese Store." I was 20 at the time and was just beginning to learn about food and cooking. Money was tight and I didn't yet have a credit card so I had to adhere to a strict budget. The Cheese Store was in the same strip mall as the Eisner grocery, and far too often I'd spend my weekly allocation on cheese and have little left for groceries. I remember having to scrounge through the pockets of my winter coats, looking for enough change to buy a half carton of eggs. Back then, a container of Taco Bell refried beans cost only 15 cents, and far too often this served as my dinner when funds were low.

The Cheese Store opened me up to an exciting new world. It became a culinary classroom and its proprietor became my teacher. At every visit, I would sample a new category of cheese, learn about its culture and terroir, and leave with a wedge of cheese and empty pockets.

One Saturday The Cheese Store hosted a woman from French-speaking Switzerland who taught a cooking class on Soupe à l'oignon gratinée, or French Onion Soup. I talked my way behind the counter and spent the afternoon as her assistant. Her version was based on six pounds of thinly sliced onions, slowly caramelized with a whole stick of butter. Hours later I was treated to a most memorable bowl of soup topped with a thick slice of homemade bread topped with melted Gruyère cheese. This taste memory has stayed with me for almost 50 years.

This was my first exposure to Swiss Gruyère cheese. I remember being surprised that it didn't have any holes, unlike other Swiss cheeses. It was firm but still elastic. Its flavor was nutty and buttery. When melted atop the bread floating in that bowl of onion soup, its texture was gooey, slick, stretchy and runny.

I am not alone in my adoration of authentic Swiss Gruyère. In this year's 34th annual World Cheese Championship in Madison, Wisconsin, first place went to a Le Gruyère AOP. AOP stands for Appellation d'Origine Protegee, which is a designation created by the European Union for products to ensure authenticity and differentiate it from copycat versions from other regions. In the U.S., anything can be sold as Gruyère. This explains why I've often been underwhelmed by most Gruyère I've purchased at grocery stores. Earlier this year a U.S. district court ruled against Swiss cheese makers who had filed a lawsuit claiming that the name "Gruyère" was exclusive to cheeses produced in a specific area of Switzerland. After a lengthy legal fight, the court ruled that cheese does not have to come from the area around Gruyères, Switzerland, in order to be labeled "Gruyère."

So buyer beware. If you're shopping for the "real deal," look for Gruyère with the AOP designation. It will cost you more than other versions, but you'll be rewarded with a cheese produced by traditional methods, aged a minimum of five months, and made from raw milk from cows fed on grass, not silage. In a practice known as Alpine transhumance, these cows graze in the high Alpine grasslands during summer and are relocated to the valleys during the winter.

Gruyère has remained one of my favorite cheeses and is a versatile workhorse in my kitchen. Because it melts so well, while many other kinds of cheese split and release fat when heated, Gruyère is perfect for cooking. Gruyère gently liquefies into a delectable molten state. I embed Gruyère cubes in arancini, little fried risotto balls. I'll use more Gruyère to make a Mornay sauce to serve with the arancini. I use it in quiches, gratins, fondues, soufflé and, of course, as a topper for French Onion soup.

The cheese mixture is also good as a topping for baked potatoes, stuffed mushrooms (especially with some crabmeat underneath), grilled eggplant or roasted halves of sweet peppers as an appetizer.

In a saucepan over medium-high heat, add the wine and bring it to a boil. Remove and let it come to room temperature.

Heat the butter in a small, heavy saucepan over medium heat. Whisk in the flour and garlic, and stir until the flour just barely begins to turn golden.

Whisk in the milk and stir constantly until the mixture is thick and smooth. Remove from the heat and let it come to room temperature.

Mix in the wine, cheese, egg, salt, nutmeg, and salt and pepper to taste. The mixture can be used immediately, or refrigerated until needed. (Either is fine, but it's easier to spread if it's chilled first.)

Heat a broiler to medium high.

Spread a thick layer on the untoasted sides of the bread slices or halved baguette. Broil until the cheese is puffed, bubbly and lightly browned. It's OK if it drips down the sides. Serve immediately.

Preheat the oven to 300 degrees F and grease a 10 x 12-inch baking dish with a little butter.

Peel and slice the potatoes into 1 1/8-inch slices. Transfer to a colander and rinse with cold water. Drain and blot dry with paper towels and season with salt and pepper.

In a large skillet, cook the bacon until crispy, then drain on a paper towel.

Pour off some of the bacon fat and sauté the onions until caramelized. Place half of the caramelized onions in the bottom of the buttered baking dish, then add half the bacon. Arrange the sliced potatoes on top, and then spread the rest of the onions and bacon.

Cover with half of the grated Gruyère. Pour in enough cream to just cover the potatoes. You may have cream left over.

Dot the surface with the butter.

Bake in the preheated oven until the potatoes are tender when pricked with a knife, about 90 minutes. 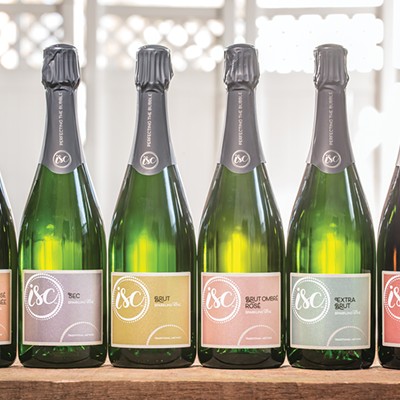