PHOTO BY HARV KOPLO
JoAnn’e Glatfelter surrounded by her family at her 80th birthday party: to the left, granddaughter Anne Schaeffer, son-in-law Peter Glatz who is carrying his grandson, Robbie on his shoulders.  On the right, daughter Julianne Glatz, a

We Glatzs have a long history of throwing surprise parties, largely due to my husband, Peter.

For my first birthday after our wedding, for days ahead he’d get up after I’d fallen asleep, roll a towel against our bedroom door to keep any smells out, and begin cooking through the night, storing his efforts in a neighbor’s fridge. My grandmother sent the birthday cake to Champaign on a bus. I was surprised by his elaborate preparations, but even more surprised when the guests and I realized Peter was missing. We found him passed out in the bathroom: he’d had only one cup of not-terribly-alcoholic punch, but was so exhausted he slept through the entire party; we ate without him.

Peter threw two surprise 40th birthday parties for me – both when I was in my 30s. I’ve never understood exactly why; his only explanation was, “I just thought it’d make things more interesting.”

There’ve been surprise parties for friends. A blizzard forced the rescheduling of David Radwine’s 40th birthday celebration, which we gave with his brother, Nat. Even so, David was surprised.

Most elaborate were the capers Peter designed for our three kids. Anne’s was a spy chase that had me driving her and a friend all over Springfield for clues, ending at an office in the State Capitol where they were given train tickets from Lincoln to Chicago. I raced to Lincoln’s station, put the girls on the train, then headed to Chicago. Since both were too young to travel alone, Peter shaved off his mustache, donned a wig and nurse’s (slacks) outfit, wrapped 5-year-old Robb in burn bandages, and boarded the train in Springfield. I’d been supposed to get to Chicago before them and check into the Ritz-Carlton (it had an incredibly low rate for American Dental Association dentists back then), but a highway construction accident held me up for over an hour. At the Chicago station, Robb needed to visit the bathroom, which put Peter in a quandary: He couldn’t go into the men’s room dressed as a female, but entering the women’s restroom would not only be uncomfortable, but risky. His solution was to send Robb into the men’s room alone, and stand outside where he was surrounded by signs warning of thieves and pickpockets. When Robb emerged, an elderly man, saddened by such a horribly injured child, addressed Peter as a woman. “That’s not a woman, that’s my dad!” Robb told the bemused man. Peter rounded up the girls, got to the hotel, and they waited for me. And waited. This happened before cell phones, and eventually Peter decided he had to check in. Embarrassed, and with explanation ready, he sidled up to the registration counter but was greeted before he could utter a word with “Welcome back, Dr. Glatz!” The Ritz is known for remembering guests’ preferences; Peter is sure that the hotel’s meticulous record-keeping still contains a memo that Dr. Glatz likes to dress as a female nurse.

PHOTO BY HARV KOPLO
Julianne’s grandson, Robbie, helps GG (Great-Grandmother) blow out her birthday cake candles as his mom, Anne, and his Aunt Ashley look on. Many guests requested the carrot cake recipe.

In second grade, Robb had decided on a future career as a detective, so his adventure was a mystery. He and Peter published a Robbie’s Detective Agency ad in the State Journal Register classifieds, complete with Robb’s school picture. A (grown-up) friend called with a case for Robb, and the chase was on. This time, the Springfield-wide hunt for clues led to a party back at our house. Ashley’s treasure hunt was less elaborate but filled with clues about its ending, a trip to Florida and Disney World.

My lone attempt to return the favor (retaliate?) to Peter was a debacle. It should have been perfect: The local dental society was sponsoring an all-day lecture. The speaker was a friend of Keith Olsen’s, a dentist nearing retirement. Olsen rented space in Peter’s office, working part-time for a couple years before leaving dentistry altogether. I assigned him the job of getting Peter home at a specific time.

The May weather was gorgeous, so the party would be outside. There’d be a huge bonfire and wiener roast. The biggest surprise would be fireworks, the big kind that have to be shot off in buried mortars. About 50 people had arrived when the time came – and went – for Peter’s arrival. An hour passed. The guests began to get restless and hungry. The fire was blazing, and the homemade doughnut batter made as I watched the clock tick. I called Olsen’s home, but his wife had no idea of their whereabouts. (This, too, was before cell phones.) After another half hour, I drove to Olsen’s home. Still no word. Finally the pair showed up. They’d gone back to the lecturer’s hotel room for more discussion. Olsen had completely forgotten about Peter’s party. I was grim-faced as we raced home, irrationally as furious with Peter as with Olsen. The party went on, but it was pretty lame, and I vowed never to throw a surprise party again.

So in early 2012 when I began thinking about throwing a big party for my mother’s 80th birthday, which took place the 16th of this month, surprising her wasn’t a consideration. But when the time came to make definite plans, health issues curtailed my ability to do much of anything, let alone engineer a major celebration. Fortunately, my two daughters, Anne and Ashley, were not just willing, but eager to take over. And they wanted it to be a surprise.

I was more than a little dubious. Ashley and her husband live next door to my mother, and Mom essentially has become their 4-month-old daughter’s full-time babysitter, spending most days at Ashley’s catering kitchen. The party was planned for the Saturday after New Year’s Day; Anne and her 2-year-old Robbie stayed another week after her husband returned to Brooklyn. Robbie is a whirlwind who needs constant supervision, and a chatterbox who repeats everything he hears. How on earth could they come up with a comprehensive guest list that included people from the many charitable and social organizations with which my mother is involved, decorations, receiving and recording RSVPs, and not least, have Ashley and her catering staff prepare the luncheon without mom (aka GG, which stands for Great-Grandmother) catching on?

They pulled it off, despite having left an envelope of leftover invitations on mom’s bed (she’d given it to Anne, unopened), Robbie’s verbosity, and the countless times family members halted mid-sentence, realizing we were about to spill the beans. No one outside the family gave it away, either.

My mom is deeply loved not only by her family, but a legion of friends. Over 150 of them were in the atrium of First United Methodist Church shouting, “Surpise!!” as she entered. It took her almost the entire length of the party to personally talk with each one. The lunch was delicious and a pianist provided background music that added to the festive atmosphere.

We did wonder, though, if GG had really been surprised, or if she’d found out and was pretending. But mom put our suspicions to rest: “You know I was surprised,” she told us. “If I’d known, I’d have washed my hair.”

Many people at my mother’s 80th birthday celebration asked Ashley for her quinoa salad and carrot cake recipes. The salad is a riff on the Quinoa Salad with Pickled Radishes and Feta that appeared in my Sept. 4, 2008 Illinois Times column and can be found on their website. It’s from Guiseppe Tentori, executive chef of Chicago’s Boka and GT Fish and Oyster restaurants. Tentori was Hope School’s 2008 Celebrity Chef; Ashley assisted him and his crew at that event. She has created several seasonal variations on the salad, including things such as roasted pumpkin cubes or, for Mom’s party, dried cranberries and toasted pecans. It’s a best-seller in RealCuisine’s Grab-and-Go case at Food Fantasies. The carrot cake is an old family favorite; the recipe is available on the Illinois Times website. 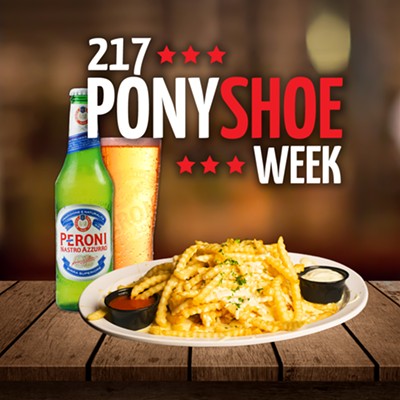