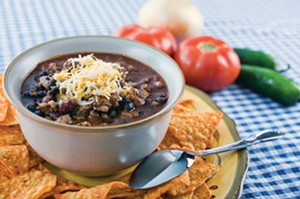 When my Illinois Times colleague David Hine asked if I would devote a column to chilli in advance of the Super Bowl, my response was, “Sure, as long as I can spell it with two lls.” But truthfully, writing about chilli is something I’ve both wanted to do and successfully avoided until now.

As a child, I was proud to claim Springfield as my hometown for two reasons. First was that it’s Lincoln’s hometown. The second – and to me equally important – was that Springfield was “The Chilli Capital of the World.”

That didn’t make Springfield as famous as I’d thought, but the quirky history of its chilli parlors is fascinating and unique to Springfield. It’s designated today as tavern chilli, probably because some of the best versions still around are only found in taverns. But the quirky guys who ferociously guarded their recipes called their establishments chilli parlors.

Chilli parlors’ heyday was decades before I came along, but they were still so central to Springfield’s identity. I remember heated debates about whose chilli was best. My family were rabid partisans of the recently reincarnated Dew Chilli Parlor on south Sixth street, not least because the owner/chilli master was the quirkiest of those quirky guys and a relative to boot.

Eventually, I realized that Springfield-style chilli is but one of many. And while my Nana wrinkled her nose at any non-Springfield version (and several Springfield iterations that didn’t meet her standards), I’ve come to appreciate those different chillis on their own merits.

The following black bean recipes aren’t even remotely Springfieldian. But they’re scrumptious and easily made vegetarian, which surely has those original chilli men – and my Nana – whirling in their graves.

About those two lls: The explanation turns out to be simple. Great Britain, and, by extension, its current and former Commonwealth nations (including India) have always spelled it chilli. For practical purposes, I label the finished dishes “chilli,” and the peppers used as chiles.

Technically this isn’t chilli; it doesn’t contain any chiles. But it’s definitely chilli-esque, and the orange juice and tomatillos contributes a bright note to the party not usually found in most chillis. Tomatillos self-seed in our garden, and I usually make extra batches to freeze when they are bountiful. But fresh tomatillos are available year-round in groceries’ produce sections.

Garnishes:
• Cilantro leaves (as above)
• 1 c. sour cream or Greek-style yoghurt mixed with the juice of 1 lime

In a large pot, heat the oil over medium-high heat. Add the meat and brown. If necessary, do this in batches so as to not overcrowd. Remove the meat when browned, and reserve.

Pour off excess fat. Add the onions and garlic to the pot. Sauté until softened and golden brown, about 10 minutes. Add the beer, orange juice, tomatillos, chopped tomatoes, the liquid from the black beans and the cilantro stems. Bring to a boil, reduce the heat to a low simmer and cook, uncovered, for about 30 minutes or until the mixture has reduced and thickened somewhat.

To make this recipe vegetarian, substitute an additional 30 oz. can of black beans for the pork. Adjust the seasonings as needed.

This recipe is my carnivore riff on a vegetarian classic from the Greens Restaurant in San Francisco. Greens was America’s first fine dining vegetarian restaurant; after 30+ years it continues to receive accolades and awards from omnivores and vegetarians alike. With or without meat, it is scrumptious.

Sort through the beans and remove any small stones. Rinse well, cover them generously with water and let them soak overnight. Alternatively, bring the beans and water to a full boil for 1 minute, then let stand for an hour before continuing.

Drain the beans and put them into a pot big enough to contain the finished chilli. Cover the beans with fresh water by a couple of inches. Bring to a boil with the bay leaf. Lower the heat and let the beans simmer while you prepare the rest of the ingredients.

Heat a small, heavy skillet over medium heat. Add the cumin seeds, and when they just begin to color, add the oregano leaves, shaking the pan frequently so the oregano leaves don’t scorch. As soon as the fragrance is strong, remove the pan from the heat and add the paprika and cayenne. Give everything a quick stir, then remove from the pan. Cool for a few minutes, then grind in a mortar and pestle or spice grinder to make a coarse powder.

To make the chili powder, put the ancho chili in the oven for 3-5 minutes to dry it out. Cool it briefly, then remove the stem, seeds and veins. Tear the pod into small pieces and grind it into a power in a blender or spice mill.

Heat the bacon fat/oil in another large skillet and sauté the onions over medium heat until they soften. Add the garlic, salt, ground herbs and chili powder, turn the heat to medium-low, and cook until the mixture is caramelized and fragrant, 15–20 minutes. Add the meat, then chop and gently mash to combine it thoroughly with the spice mixture. Continue cooking until the meat is just cooked through.

Add the tomatoes, their juices and the minced chipotle chili with some of its adobo sauce. Simmer for 15 minutes.

Carefully pour the skillet’s contents into to the beans, being sure to scrape up any and all of the bits at the bottom of the skillet. If they are stuck, add a small amount of water to the skillet over high heat and scrape the bits so that they dissolve and add to the pot. If necessary, add enough water so that the mixture is covered by at least one inch. Continue cooking until the beans are completely tender, an hour or longer.

Serve in bowls, passing the garnishes for diners to add as they wish.