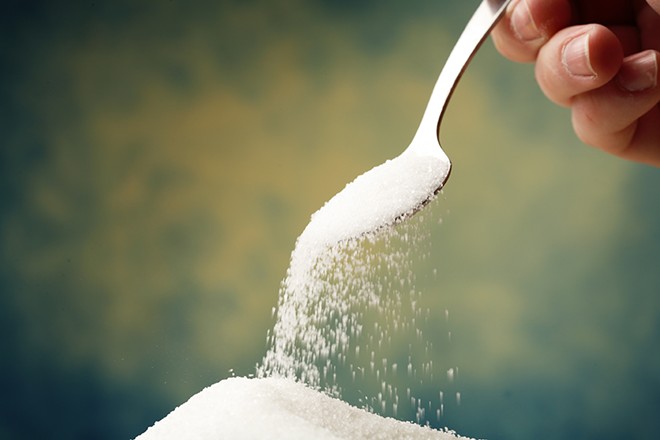 Sugar was first domesticated in New Guinea 10,000 years ago. Sugar cane spread to Asia and Europe, but was initially only available to the wealthy. Christopher Columbus first introduced sugar cane to the New World during his second voyage in 1493. Sugar cane grew well in the hot, humid conditions in the Caribbean. Native peoples initially provided the labor and, when this was insufficient, slaves were imported from Africa. Over the course of 300 years, from 1505 through the mid-1800s, 12½ million slaves were forcibly transported to the New World to fulfill the growing demand for sugar in Europe.


Technology contributed to the increase of sugar in food products. Today sugar is added to nearly all processed foods and is ubiquitous in the American diet. Sugar allows for preservation by inhibiting microorganisms that would cause spoiling, inhibits mold and bacteria in liquids, reduces harshness of salt used for preserving meat, reduces acidity, enhances flavor and adds viscosity. On average, Americans consume 66 pounds of sugar per person per year (around 20 or more teaspoons per day). Americans consume the most sugar per capita of any country.


There's lots of evidence about the harmful effects of sugar. Gary Taubes published The Case Against Sugar in 2017. He argues that sugars are fundamental causes of diabetes and obesity. There is also a great deal of research about the addictive nature of sugar. Scientists at the U.S. National Institute on Drug Abuse were among the first to show that sugar causes changes in peoples' brains similar to those in people addicted to drugs such as cocaine and alcohol.


Consuming too much added sugar over long periods of time can affect the natural balance of hormones. Eating sugar increases levels of glucose in the bloodstream, which leads the pancreas to release insulin. Higher levels of insulin, in turn, cause the body to store more food calories as fat. Insulin also affects a hormone called leptin, which is the natural appetite suppressant that tells our brains we are full and can stop eating.


Sugar is big business, and it should come as no surprise that the sugar industry has been a powerful voice in promoting sugar as beneficial and contributing to the increase in consumption of sugar. In the 1960s, the sugar industry funded Harvard scientists who published a study blaming fat and cholesterol for coronary heart disease while largely exculpating sugar. This study helped set the agenda for decades of public health policy designed to steer Americans into low-fat foods, which increased carbohydrate consumption and exacerbated our obesity epidemic.


Studies have found that excessive added sugar consumption increases the risk of obesity and type-2 diabetes, which in turn increases the risk of heart disease and stroke. The best way to eliminate sugar from the diet is to avoid processed food and cook with whole foods, incorporating fresh vegetables and fruits. All calories are not equal. Experts recommend that meals should be balanced with 30 percent protein, 30 percent good fat, and 40 percent low-glycemic carbohydrates.


Elimination of sugar from one's diet may be difficult to imagine. But, it would be hard to come away from reading Gary Taube's book, The Case Against Sugar, without viewing sugar in a new light. And, that is likely the first step in deciding to reduce one's consumption of sugar.

We are open for your business

We are open for your business