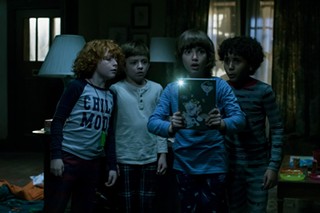 Amidst the many horror film offerings dumped upon us this time of year, Come Play emerges as a cut above the rest. Plucking elements from The Babadook, The Ring and Mama, among others, writer/director Jacob Chase manages to craft a stylistically creepy tale of alienation and longing, revolving around a little boy partially sealed off from the world, his desperate, harried mother and an absent, well-meaning father. Stylish but never overstated, the movie delivers effective thrills as well as pointed commentary concerning the invasive nature of modern technology and the way it alienates and tears families apart. Highly functioning yet non-verbal, Oliver (Azhy Robertson) is a 10-year-old whose autism has put a strain on his parents’ marriage. Sarah (Gillian Jacobs) is frustrated trying to reach her son, feeling abandoned at times by her husband, Marty (John Gallagher Jr.), who always seems to be away from home, working various part-time jobs to make ends meet. Each of them is treading water in their own way, all of them reaching the end of the respective ropes. Making matters worse, an illustrated story, Misunderstood Monsters, randomly pops up on Oliver’s phone one day. It revolves around a horrific, misshapen creature named Larry who longs to have a friend, the sing-song story spelling this out. Once he begins reading the story, Oliver realizes it’s far more than just a mildly twisted tale and stops before reaching the end. His intuition proves correct, as Larry is a creature of the modern age, one that lives via electric currents and is intent to break free from the various electronic devices he’s able to travel back and forth from. Only visible by looking at the screen of whatever device he happens to be inhabiting, he’s intent on getting out and Oliver is going to be his friend, no matter what. That our young hero is dependent on an app on his phone he uses to communicate makes him vulnerable throughout, yet when he finally abandons it, he’s still in danger as Larry has learned to travel from tablet to computer to phone, never letting the boy out of his sight. This is one of the many clever conceits Chase employs, the film moving at a brisk pace, suffused with one haunting visual after another. As Oliver walks by a series of electronic tablets for sale, they all turn on, Larry reaching out to him; as Marty barrels down the road fleeing the monster, pairs of streetlights go out behind him in quick order, signaling Larry’s pursuit; garbage swirling in the wind begin to catch on Larry’s invisible form, outlining his malevolent shape as it approaches Oliver’s unsuspecting father. These simple, subtle moments prove incredibly effective in driving home the hidden menace that lurks about the characters, Chase adhering to the notion that less is often more in horror films, suggestion far more effective than full-blown violence or gore. The filmmaker knows just how effective an exploding lightbulb or three can be when timed correctly, a technique he utilizes to wonderful effect during a sleepover with Oliver and his friends that goes horrible awry. It comes as no surprise that Larry ultimately escapes, revealing himself to be a sympathetic creature with more than a few things in common with Oliver. After a heated chase of mother and child, Chase provides a poignant, plausible conclusion that lends the exercise a narrative weight that helps elevate it above pedestrian genre entries. More than anything, Come Play serves as an effective calling card for an inventive director, one I’m eager to see reveal what he has up his sleeve next.

Writing for Illinois Times since 1998, Chuck Koplinski is a member of the Critic's Choice Association, the Chicago Film Critics Association and a contributor to Rotten Tomatoes. He appears on WCIA-TV twice a week to review current releases and, no matter what anyone says, thinks Tom Cruise's version of The Mummy...