Paramount Pictures has been very aggressive in promoting Mission Impossible: Rogue Nation, moving it forward from its original Christmas Day release date and having much of the advanced publicity focusing on a stunt that finds franchise star Tom Cruise hanging from the side of a plane as it takes off and reaches an altitude of 5000 feet.  No doubt, it’s a spectacular moment and Christopher McQuarrie opens his film with it.  Yet, with so much focus on this single moment, I couldn’t help but wonder if the movie would simply be a string of stylized action moments with little substance. 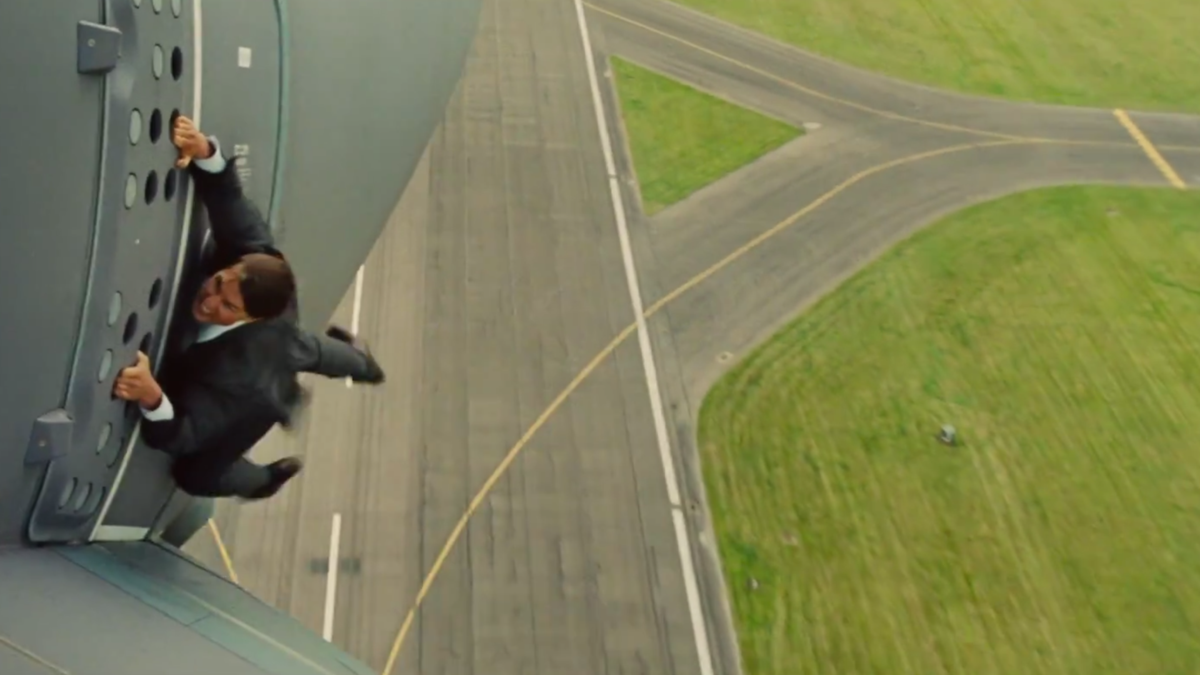 There’s a bit more at play here than simply wowing audiences – if just barely – and while the script by McQuarrie is buoyed by a clever sense of wry humor, the espionage shenanigans that move the plot forward are simply an amalgam of spy movie clichés.  Obviously, the filmmaker is aware of this as he leans heavily on stunt coordinator Wade Eastwood to distract audiences from plot déjà vu, which would surely set in were they given a moment to think.

This time out, Hunt is in pursuit of The Syndicate, a shadow organization that he believes is responsible for a series of terrorist attacks. Having stayed underground since the events in Ghost Protocal, the spy has gone rogue, something of great concern to CIA director Hunley (Alec Baldwin), who thinks the Syndicate doesn’t exist and has simply been fabricated by Hunt to justify the existence of the Impossible Mission Team. Directing his colleague William Brandt (Jeremy Renner) to bring him in, Hunt finds himself on the run not simply from the Syndicate’s agents but those from his own government as well.  That a mysterious, deadly woman (a very good Rebecca Ferguson) keeps popping up wherever Hunt is – at times ready to kill him, at others to help him – only adds to the intrigue.

Double crosses and switchbacks occur with predictable regularity and while the story itself is a bit of a rote exercise, there’s no denying McQuarrie knows how to turn a phrase and just when to inject some much needed humor to remind us that the film is supposed to be fun.  Much of that comes from Simon Pegg as Benji Dunn, the easily flustered computer hacker who Hunt, inexplicably, trusts with his life. The banter these two engage in is natural, well-timed and quite funny as the exasperation each expresses is based on the admiration and affection they have for one another.  Their scenes help the film from becoming a pedestrian affair.

Eastwood’s work does as well, as movies of this sort live and die by their action set pieces and Nation has them in spades.  In addition to the aforementioned plane stunt, which sets the standard high for thrills from the start, there’s a spectacular chase scene on the streets of Morocco as well as an elaborate break-in that involves underwater heroics. These moments all work exceptionally well, far better in fact than scenes involving hand-to-hand combat that are nothing more than a confusing muddle thanks to the spastic editing rhythm employed or an assassination attempt at an Italian Opera House that runs far too long. Fortunately, the film ends on a high-note with a clever climax, with the added bonus of seeing Baldwin convincingly deliver one of the most overwrought lines of dialogue in recent memory.

Though Rogue Nation has a derivative feel to it and features an uncharacteristically detached performance from Cruise, it does deliver the sort of gasp-inducing, popcorn thrills the franchise has become famous for, which will likely please viewers around the world. Here’s hoping that the next entry is able to find a fresh take on the series, something that proves impossible here.