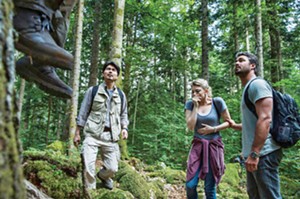 Not sure why early January has become the time for low-budget horror films to be released, but it’s become a bit of a tradition, at least where the last five years are concerned. And while quality is not always guaranteed, the profits have been solid enough to continue this practice what with The Devil Inside (2012) bringing in $55 million on a $1-million budget and Mama (2013) profiting $71 million on a $15-million investment. In the world of half-billion-dollar grosses, this may seem like small change but the ratio of money made in relation to that invested is impressive.

It remains to be seen whether director Jason Zada’s feature film debut The Forest will find similar success, though with a modest budget of $10 million and thousands of teens with disposable income, it’s likely its producers will be pleased with the final tally once the end of the month rolls around. Too bad the movie’s aspirations are in line with its budget, as The Forest is modest when it needs to be daring, failing to fully develop what is a genuinely intriguing premise.

Sensing something is amiss with her twin sister, Jess, Sara’s (Natalie Dormer, in both roles) worst fears are confirmed when she gets a phone call from the Japanese school where she’s employed. Seems she was last spotted entering the Aokigahara Forest, a vast sea of trees at the base of Mount Fuji that has the infamous reputation of being a common location for suicides. (The worst year on record was 2010, when 54 people took their own lives.) Fearing for her safety, Jess travels halfway around the world to track down her sister. Upon her arrival, Jess is informed that if she’s to travel into the forest, she should never leave the path, a warning that’s repeated with increasingly cryptic and dire overtones. As the script’s three screenwriters would have it, Jess meets a hunky travel writer (Taylor Kinney) who agrees to accompany her into the haunted woods, as does a knowledgeable park ranger (Yukiyoshi Ozama).

The most interesting part of the premise is that the natives inform Jess that the spirits of the Aokigahara are able to read your mind, discovering your worst fears and then using them against you. This provides a myriad of possibilities, especially when our heroine is warned not to believe everything she sees, yet this is hardly exploited during the film’s final 45 minutes. Yes, Jess is tormented by a bad memory where the death of her parents are concerned, and while she does come to look at her travel mates with a suspicious eye, this is hardly developed enough to provide the sort of thrills they should. Having each of the main characters suffer from delusions or become haunted by their fears coming to life would have resulted in a paranoid exercise that not only would have kept the characters on their heels, but the audience as well.

Dormer accords herself nicely in the dual role, the actress’ strong screen persona finally allowed to flower after being stunted in numerous supporting roles. Neither Jess nor Sara are pushovers, as the actress develops them into strong-willed women who don’t need saving but rather women whose fierce determination trips them up in the end. Kinney does fine in a thankless role, so much so that one hopes he gets a starring role soon to see if he can carry a movie on his own. However, as it should, the Aokigahara dominates the film and Zada captures it in all its creepy glory, convincing this viewer that horrors do lie within. Unfortunately, far too few of them are harvested in this lackluster exercise.