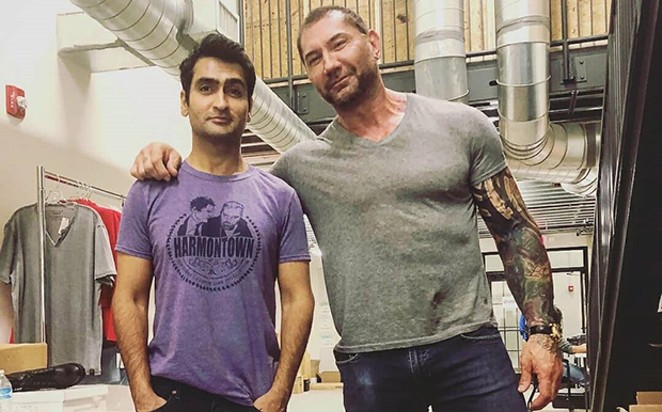 You can tell that Kumail Nanjiani and Dave Bautista like each other. They are very much at ease with one another, finish each other’s sentences and laugh at inside jokes while those around them stand amused at their genuine camaraderie.  This was all on display during a recent stopover in Chicago where they were promoting their new film Stuber, a buddy comedy in the tradition of Rush Hour and Ride Along.

“We got along great the whole time, immediately from the beginning, so that stuff translates on screen,” says Nanjiani when asked if their chemistry was immediate or not.  “Even when we’re antagonistic towards each other, I think knowing that you have a strong bond personally actually allows you a little more leeway in the scenes where you’re fighting to really take it to a place because you know that your base is so solid.”

While there’s little in the way of originality where the movie is concerned, the interaction between the two stars does generates its own brand of enjoyment, their antagonistic banter the highlight among all the violent shenanigans of their characters. Bautista agreed.  “I think there’s a certain comfort level.  I think you either have chemistry or you don’t.  I don’t think it’s something that you can create. Maybe you can, but I think with us it’s just kind of natural, it shows.”

Because they are so comfortable with each other, I asked if they ever went off-script and improvised. “There was a lot of improv,” Nanjiani recounted. “We improvised a bunch and a bunch of it’s in the movie, not just the funny stuff, but also little character moments so we sort of gotten to know our characters as we filmed. There are probably enough alternative lines to make another film,” he said with a laugh.

One of the most enjoyable aspects of the movie is seeing the actors’ different approaches to comedy clash to hilarious effect.  I asked how each dealt with the other’s method.

“I’d never considered myself a comedic actor,” related Bautista. “I’d never really done the straight man thing as Drax in Guardians, but I’d done the full-on straight comedy thing, so it was really kind of a learning experience.”

Having to learn physical comedy proved a bit harder for Nanjiani than he anticipated. “I’ve never done that kind of physical acting before, and I liked watching Dave do it because he’s so good at it,” he said. “I mean, he’s good at all types of acting, but physical acting is something that I really, it’s true, I had never done it and been with someone who had done it so well. It’s really interesting watching him.  I actually learned a lot.”

One thing that Bautista and his character, a bitter, grizzled cop named Vic, have in common is their hate of labels and preconceived notions.  I asked the stone-faced actor just who the real Dave Bautista is and what his collection of steel lunch boxes has to do with expressing what he’s really like.

“Man, that’s a good question!” he said with a laugh. “That’s a really big, loaded question and I don’t think I can answer it, so let’s go straight to lunchboxes!”


Following his lead, I asked what the crown jewel of his collection is, a question that caused Nanjiani to laugh out loud. “The jewel of my collection, I’ve acquired just a couple weeks ago,” said Bautista with a seriousness usually reserved for when one speaks of their children. “It’s this 1950s Toppie lunchbox.  It’s almost impossible to find.  It’s something you couldn’t purchase; you had to get it through trading stamps.  So that’s how you had to acquire that, and I got one.”

Nanjiani was quietly laughing during his co-star’s response and couldn’t wait to chime in.

“Toppie is this elephant,” he said, barely suppressing a giggle. “I never knew this character, but when we were shooting, he would show me his lunchbox thing and he was like, ‘I’ve got to get this Toppie.’ And I was like, ‘Who is Toppie?’  And he showed me his trading stamp stuff, and oooohhhh it’s so rare. I said, ‘Well, good luck,” and just a week ago I saw his Instagram story he got his Toppie lunchbox!”

While his love of lunchboxes reveals a softer side to the former WWE star, he has another passion that further exposes his big heart – his love for his other Stuber co-star, the dog, Stroker.  When I asked for background on the dog, Nanjiani couldn’t wait to chime in.
“Dave fell in love,” he remarked. “It was so bad that whenever Stroker would get uncomfortable, Dave would say we couldn’t shoot until he was comfortable again, so we’d have to wait.”

In explanation, Bautista explained, “It was outside in Atlanta in the summer, so it was hot and because dogs don’t sweat, he was panting all the time. He’s such a sweet little guy.  I’m a dog lover. I love dogs. I was in a bit of a separation anxiety on this film away from my dog and Stroker kind of filled that void for me. He’s a big part of the film, and he’s a big part of my character as his presence helps explain who my character is on the inside.  I think he’s actually going to the premiere as well.”

There hasn’t really been a comedy of this sort on screens during this summer season, so this film is likely to find an audience.  Nanjiani and Bautista are certainly hoping so, as they shared that they are hoping to do a sequel, what with the many ideas they generated while making Stuber that weren’t used.

“If it was up to us, yeah, I can see it. We would green light it,” said Nanjiani with a twinkle in his eye. “It’s not fully up to us.  It’s for other people to make these decisions.”

Bautista agreed, “We’ve talked about it a lot, but we’re both kind of downplaying it. I can’t wait for it to happen if we’re so fortunate.”