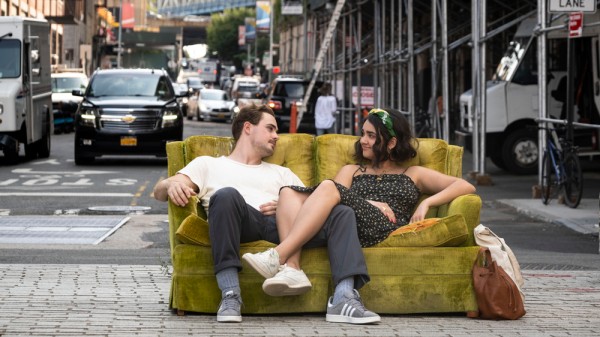 Lucy has certain ideas about love. Every boyfriend she's had was going to be THE ONE! Her former partners used string to bind their relationship together. Lucy used logging chains. Her level of commitment has never matched that of anyone she's been with, making heartbreak an inevitability. And to make matters worse, she keeps a souvenir from every one of her break-ups, a keepsake to remind her of what could have been, each an anchor holding her back from having any sort of meaningful relationship or loving herself.

Natalie Krinsky's The Broken Hearts Gallery examines this special brand of psychosis through a light-as-a-feather, rom-com lens that initially treats this behavior as an endearing quirk. Only after enduring a myriad of genre tropes do we get to the reason for our heroine's behavior, a twist that brings a welcome sense of poignancy that helps salvage this by-the-numbers effort. Stumbling out of the gate, the film rights itself in the end thanks in large part to the game cast which is skilled enough to bring a sense of charm to the stereotypes they've been saddled with.

Krinsky adheres to the rom-com playbook it as if her life depended on it, making sure to include two cute, quirky roommates, exes who boomerang back asking for a second chance and an instance of miscommunication that leads to a tragic misunderstanding. (I won't speak of the film's climax – you know where it's headed.) Lucy (Geraldine Viswanathan) and Nick (Dacre Montgomery) are the couple in question and their point of first contact occurs when she mistakes his car for an Uber. She can be forgiven as she's just been fired, dumped by her latest boyfriend and has done what any rational person would do in the face of these misfortunes – she's gotten drunk.


Of course, we'd have a very short movie on our hands if this was their one and only meeting, so as with most films of this sort that take place in New York City, the Big Apple suddenly becomes a small town. Lucy just happens to run into Nick, as well as her ex, Max (Utkarsh Ambudkar), with a frequency suggesting they all live in a four-block radius of each other. No matter. This is part and parcel in the genre as is the improbable but inevitable romance that develops between the two principals, this one predicated on an impromptu gallery Lucy sets up in which she displays the many mementos that commemorate her various break ups.

This soon becomes a sensation as New Yorkers are invited to contribute their own items to what's eventually called "The Broken Hearts Gallery." This art installation therapy proves cathartic for all who participate, allowing them to deal with their pain and move on, Lucy and Nick benefitting the most.


The success of the movie is in doubt early on as you can tell why Lucy has suffered so many heartbreaks, while Viswanathan and Montgomery generate little in the way of chemistry. Initially, our heroine is far from appealing, a self-indulgent sad sack whose incessant talking would test Job. And while Krinsky is guilty of sticking to a formula, the relationship she pens for the two leads is surprisingly fresh. As they learn more about each other, you can see the awkwardness between the characters and actors slowly fade away, ultimately replaced by an attraction that's sincere and undeniable. As a result, Broken Hearts manages to give the audience exactly what it wants and then some, a familiar and comforting diversion that sneaks in a bit of genuine sentiment.