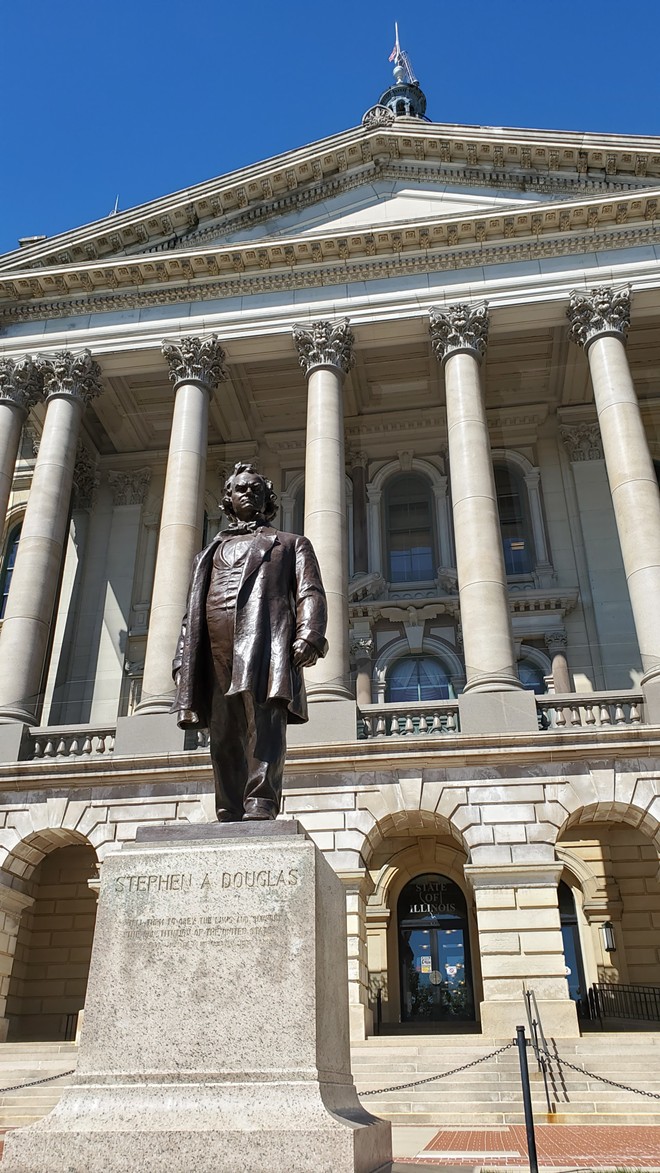 Rachel Otwell
The statue of Stephen A. Douglas that is slated for removal is in a prominent position outside the visitor's entrance of the Illinois Capitol.

Statues of Illinois figures who profiteered from slavery will be removed from the Statehouse lawn. The decision was made when the Office of the Architect of the Capitol board voted unanimously for statues of Stephen Douglas and Pierre Menard to be removed and put in storage. Capitol architect, Andrea Aggertt, said discussions with contractors are underway and the goal is to put the statues in secure storage by winter. “We'd want to move as fast as we can,” she told reporters.

During the Wednesday morning meeting, two other motions were also approved. One will have the office undergo a review of all murals, artwork and statues on the Capitol grounds to assess and make potential changes. “Hopefully we could get that reviewed again, as we're supposed to already do, and then provide a little bit more detail about the history of the statues,” said John Hollman, the chief clerk of the Illinois House who introduced the motions.

The third approved idea was to change a rule stating statues on the capitol grounds must be Illinois-centric. That would mean a statue of Martin Luther King Jr. that’s currently across the street from the Capitol could move to the Statehouse grounds. Some have called for the statue to be restored or redone entirely, a sentiment echoed at the meeting. “No offense to whoever did it, but I just think that's a poor rendering of Dr. King, and I think we could do better. … At some point I think we should consider having that one redone,” said Scott Kaiser, assistant secretary of the Illinois Senate.

Brad Bolin, assistant chief clerk of the Illinois House, suggested a “comprehensive public discussion to review any decision making so this board is not acting … without public input.”

The decision to remove the two statues comes after House Speaker Michael Madigan released a statement on July 9 stating he wanted them to go, among other related proposals.

The statue of Pierre Menard, Illinois’ first lieutenant governor and a fur trader who owned enslaved people, shows him looking down on a Native American. The imagery is done in a white supremacist fashion, scholar James Loewen had told Illinois Times. The son of Menard’s business partner paid for the statue and it was placed on the lawn in 1886.

A second statue of Douglas, an Illinois politician and opponent of Abraham Lincoln’s in the presidential race of 1860, is inside the Capitol building. Douglas had profited from a plantation in Mississippi. It’s still unclear what will become of that statue.