Not clear on whether he resigned or was terminated

Wheeler’s departure, which occurred today, is the latest in a series of departures of top-level staff at the ALPLM. Alan Lowe, former director, was fired last fall by Gov. JB Pritzker after the director loaned a copy of the Gettysburg Address to a fledgling museum in Texas run by Glenn Beck, conservative talk show personality.
click to enlarge 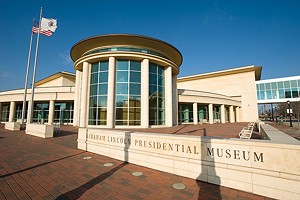 Wheeler's departure is the latest in a series of shakeups at the ALPLM.

Chris Wills, ALPLM spokesman, said that he couldn’t say whether Wheeler had been fired or had resigned. “I’m trying to find out all the details,” Wills said.

“I am just reeling,” Harris said. “I can’t get my brain around the rationale around it.”

Harris said she serves on a board subcommittee tasked with determining provenance of a stovepipe hat purportedly owned by Lincoln. Since questions arose about the hat’s authenticity a few years ago, it has been removed from the display list. Harris said that the subcommittee on July 7 authorized Wheeler to consult with textile experts to determine whether the hat’s material is from Lincoln’s era and whether labeling inside can connect the Great Emancipator with the hatmaker.

Wheeler could not be reached for comment. Harris said she spoke with him this afternoon.

“He was flabbergasted,” Harris said. “He didn’t see it coming.”